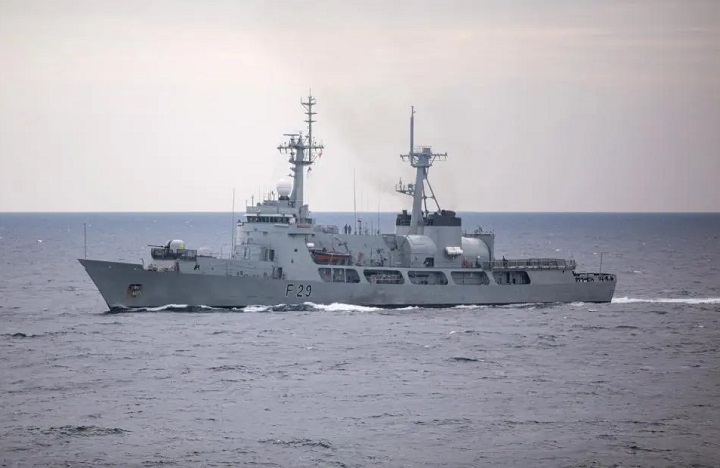 By abandoning the cause of liberating the Blessed Land of Palestine and betraying its noble Ummah, the lying and traitorous Hasina regime has sent our military to join an America-led large scale naval drill in Gulf waters alongside the illegitimate Jewish entity. America is holding this 18-day International Maritime Exercise (IMX) since January 31, 2022, as part of fostering ties between the Muslim countries and the illegitimate Jewish entity. And our naval force is sent in a very clandestine manner with no local news coverage on this at all.

The spineless ruwaibidah (incapable) regime of Bangladesh is following the footsteps of the others in allying with the illegitimate Jewish entity. On the behest of their Western masters, they have been conspiring with the evil occupier of the Blessed Land in its crimes against the Ummah since its inception. Hasina regime has also kept military ties with this illegitimate murderous State as it has been secretly buying mass surveillance equipment from them. These traitorous rulers have sold their Deen to the Kuffar in exchange for the protection of their thrones and wealth. So, it is not surprising that in due course they have exposed where their true loyalty lies.

Now, when the tyrant Hasina regime comprehends that America wants regime change in Bangladesh in the light of her new Indo-Pacific Strategy, it seeks to appease her at any cost in order to remain in power. But Hasina should know that by betraying Allah (swt), His Messenger (saw) and the believers and adopting the policy of appeasing USA, she will not avert the American plans for regime change. We saw how Sudan’s Omar al-Bashir also tried to befriend with the illegitimate Jewish entity by giving in to the demands of USA in a bid to secure his power. But his master US disowned him in the end and forcibly removed him from the power in 2019.

O Sincere Officers of the Armed Forces in Bangladesh!

Treachery and hypocrisy are lifelines for the secular rulers of Bangladesh. Surely, you can no longer hope anything good from them as they only exist to fulfill the interest of the disbelieving colonialists. But it makes our blood boil to see how you are being used to betray the Allah and the honorable Muslims of the blessed Palestine. We in Hizb ut Tahrir / Wilayah Bangladesh remind you that the honor of the sacred land of Palestine is close to the heart of all the Muslims who link it to their Aqeedah. It is the place of Isra’ and Mi’raj of RasulAllah (saw) and is blessed by Allah (swt). So, Palestine must be the red line for you as it is forbidden to be even part of forsaking any inch of this land to the Kuffar. When it is obligatory for the capable Muslim armed forces to liberate this Holy Land from the abomination of the Jews and return it to the Ummah, this treacherous regime is exploiting you to fulfill the evil agenda of the colonialist for their illegitimate child.

This regime’s secret working relationship with “Israel” is exposed already. And, sending you secretly to the joint naval drill with the cursed Jewish entity is another scheme to accustom us to slowly accept these crimes and treasons. If you choose nothing but take sides with the enemies of Islam and Muslims, you will also be a part of this great betrayal with the Deen! Then, they will move next to befriend “Israel” openly.

O True Descendants of Khalid, Salahuddin and Muhammad Al-Fatih! This is the time to uproot the hypocrite regime when it is exposed and detached completely from the people. Hizb ut Tahrir asks for your nusrah (support) to restore the Khilafah Rashidah (rightly guided Caliphate) upon the Method of the Prophethood. Only the promised Khilafah will reunite us and restore the glory of the Muslims of the Masra (place of Isra’) of the Messenger of Allah (saw). Allah (swt) says,

“Allah forbids your alliance with those who fight you because of your Deen, and drive you from your homelands, or aid others to do so: and as for those who turn to them in alliance, they are truly oppressors.” [Surah al-Mumtahina: 9].