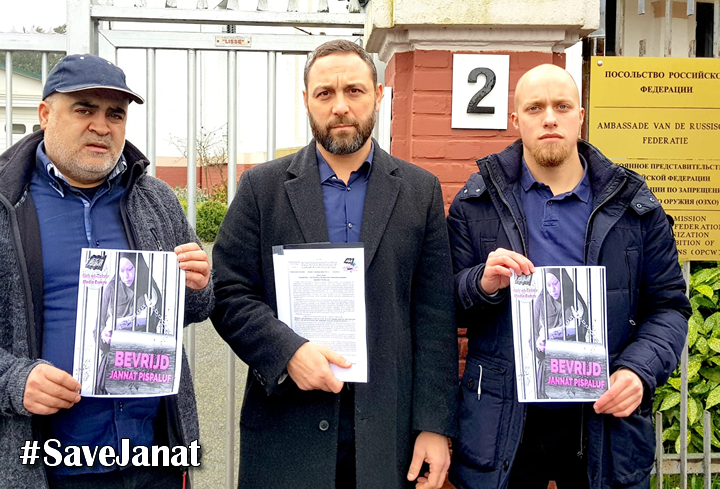 On 16/03/2018, a delegation of Hizb ut Tahrir in the Netherlands visited the Russian Embassy in The Hague because of the unjustified arrest of Jannat (Alla) Bespalova, by the Russian authorities. Jannat Bespalova is a Russian revert to Islam and member of the Islamic Political Party Hizb ut Tahrir. Her membership and the call to Islam were reason enough for the authorities to arrest her in January. Meanwhile her detention has been delayed by another two months. Also her husband Issa Rahimov has been sentenced to 12-year prison for the same reasons.

The Russian authorities initiated a witch-hunt on the members of Hizb ut Tahrir in which countless members of the party and other Muslims that stand up for Islam are jailed. Even the ordinary Muslim on the street is not free of this hounding. The aggressive, anti-Islamic policy which is being pushed through by the regime is making life difficult for the Muslim communities. This is not only experienced in Russia but also the neighboring countries in which Russia has it influence.

Russia’s hatred for Islam is so strong that it is even felt in Syria. Until today cowardice bombings are being carried out in Syria in which no one is spared and thousands of children and women lost their lives. Even civilian targets like neighborhoods, hospitals and infrastructure are destroyed completely.

Our message which we wish to pass through to the Russian authorities via our delegation is that the crimes of the regime will not remain unnoticed. Sooner or later they will have to account for what they did for the Grand Court in the Hereafter. But before that time comes, the coming Khalifah Rashidah (Rightly-guided Caliphate) will hold them to account for their actions here in this world.

Until that time, we, members of Hizb ut Tahrir will work continuously until Islam is dominant and justice will prevail. Injustice against us or the Ummah will not, by Allah’s will, distract us nor divert us to work to achieve this. On the contrary, we will be even more motivated and even more so fixed on reaching our goal.