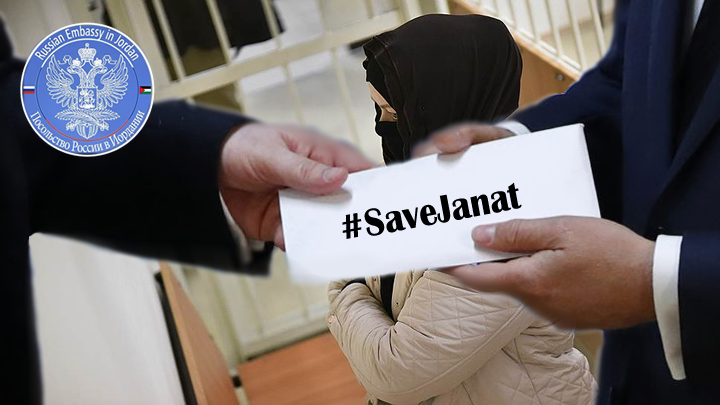 On Monday, 12/03/2018, a delegation from the Central Communications Committee of Hizb ut Tahrir Wilayah of Jordan delivered the statement issued by the Media Office of Hizb ut Tahrir in Russia entitled “Russia is the Terrorist and not the Pious Muslim Jannat Bespalova” to the First Secretary, Deputy Consul, who promised to hand it over to the Russian ambassador, who was not present in the embassy at the time.

The statement exposes the criminal acts carried out by the Russian authorities against Muslims, where hundreds of Muslims languish in their prisons due to their participation in the work of Hizb ut Tahrir. It has falsely fabricated terrorism charges against the Hizb, based on the shameful decision of the Russian Federal Supreme Court, issued in 2003, which included Hizb ut Tahrir as part of the list of terrorist organizations. The statement specifically highlights the arrest of the Muslim sister Jannat Bespalova on 24/11/2017. She remains in detention until now.

The following is the text of the statement that was delivered to the Russian embassy in Amman:

Russia is the Terrorist and not the Pious Muslim Jannat Bespalova

Today, hundreds of Muslims are imprisoned in Russia’s prisons because of their participation in Hizb ut Tahrir’s work. They were falsely accused of “terrorism” based on the 2003 Supreme Court’s shameless decision to classify Hizb ut Tahrir as a terrorist organization. According to this unique decision, the Islamic Political Party became a “terrorist” party. With the tightening of Russian laws against party members, the charges became fabricated not on the basis of the laws of “fundamentalism” in the Constitution but on the basis of the laws of “terrorism”; sentences can reach up to twenty years imprisonment.

The application of these “laws” led to open persecution in all regions of Russia, including St. Petersburg, where dozens of Dawah carriers have been arrested over the past few years. On the 24th November the security services arrested the wife of one of the detainees who was sentenced to 12 years imprisonment, he is, Issa Rahimov, a member of Hizb ut Tahrir. Issa’s wife is of Russian descent; she converted to Islam and changed her name from Alla to Jannat Bespalova. She was arrested for her work with Hizb ut Tahrir and was thrown in prison where the criminals are held. It was then decided, in January 2018, to extend the sister’s detention for another two months, which means that she will remain in Russia’s prisons until 16/03/2018, the date of the next court hearing. Allah (swt) says:

“Hatred has already appeared from their mouths, and what their breasts conceal is greater. We have certainly made clear to you the signs, if you will use reason” [Al-i-Imran: 118]

They accused the pure sister and previously accused her husband of “terrorism” and imprisoned her, according to the articles of the Constitution for working with the Islamic political party, Hizb ut Tahrir, as if the words “Islam” and “politics” became a crime! Russia has always been an enemy of Islam and the Muslims; from participating in a front against the Ottoman Khilafah (Caliphate), to killing the elderly and children in Syria through bombings, and from banning Islamic culture books to the arrest of innocent Muslims.

Some documents showing the horrific persecution of Muslims in Russia are still being kept. In the Sverdlovsk State Archives, there is an order to kill Kisanbek Pairasov, aged 60, for having returned to Islam after forcefully converting to Christianity.

It is stated in a sentence dated February 8, 1739: “… because she escaped 3 times, and because she is still a Christian fugitive and converted to Islam, she is sentenced to death by burning.” On 14th March of the same year, General Swimunov signed a decision in the case of the “Bashkir” woman, who became a Christian and was given the name Katrina and fled three times in Bashkiria, and because she had left Christianity and converted to Islam, she is sentenced to murder by burning, as a deterrent for others, anyone like her will be punished in the future” (Source: State Archives of the Sverdlovsk Oblast F 24.p.1.d.818.S.243)

This is an elderly Muslim woman who was burnt alive in the main square of the city of Yekaterinburg a month after she was sentenced. Allah (swt) says:

“And they will continue to fight you until they turn you back from your religion if they are able” [Al-Baqarah: 217].

Today, like what happened hundreds of years ago; Russia pursues Muslims because of their creed, it hinders the spread of Islam among the Russian people. It fights wearing headscarves (Khimars) by young Muslim women in schools and institutes, so as not to become an example of others. Those adhering to Islam feel as outcasts. This explains why Bespalova was accused of carrying out “terrorist” acts. The aim of this flagrant lie is to frighten and prevent people from embracing Islam and to keep them away from the ideas of Hizb ut Tahrir, the political Islamic party.

This year, three women were placed under house arrest in Tatarstan on charges of carrying out “terrorist” acts because of their participation in Hizb ut Tahrir’s work. The case files against them include holding meetings to talk about Islam, and this is of course not a crime. However, the linguist, who listened to their talk in the meetings, found that their mention of some verses and Hadith is similar to the verses and Hadiths contained in the books of Hizb ut Tahrir. This is enough it seems, according to them, to accuse them of carrying out “terrorist” acts!

All the Muslim women accused in this case in Tatarstan have left Russia to get rid of the “terrorism” charge. But our sister Jannat (Alla) Bespalova, has been behind bars for about two months, among the real criminals, for nothing but professing that my Lord is Allah, there is no god but Allah.

Russia is an enemy of the Islamic Ummah, and it behaves as Qurayish, which blocked the call of our noble Messenger (saw), Russia also thinks it is able to stop the spreading of the truth, but Allah (swt) says:

“They want to extinguish the light of Allah with their mouths, but Allah refuses except to perfect His light, although the disbelievers dislike it” [At-Tawba: 32].

The best response to Russia’s actions against the weak Muslim women, is to work with Hizb ut Tahrir to establish the rightly guided Khilafah (Caliphate) on the method of Prophethood All Muslims who are oppressed because of their Deen need the shield mentioned by the Prophet (saw):

“Verily the Imam is a shield who is fought from behind it and is protected by”. Only by restoring this protective shield we can stop anyone who thinks of attacking the lives or honour of the daughters of the Islamic Ummah.

O Muslims, we invite you to work with Hizb ut Tahrir on the method of the Prophet (saw) to establish the state. This is the right path to get Allah’s pleasure (swt). Restoring the Islamic rule relieves the Muslims from the laws of Kufr and the evil of the oppressive regimes. Allah (swt) says:

“O you who have believed, respond to Allah and to the Messenger when he calls you to that which gives you life. And know that Allah intervenes between a man and his heart and that to Him you will be gathered.” [Al-Anfal: 24].

O Allah, we ask you for the support and to bless our Sister Jannat with your care, and her husband and all the Muslims who are held in the tyrants’ prisons without a crime; and the oppressed Muslims because they carry the Islamic call. Oh Allah, we ask you to bring closer that day when Muslims bring back the rule of Islam to the earth, with your help, and we punish all those who attacked the sons and daughters of our noble Ummah, O Allah accept our duaa, Amen.