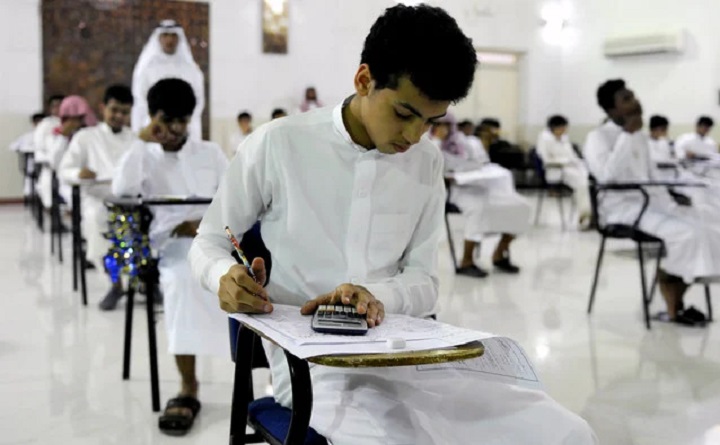 In line with Saudi Arabia’s Vision 2030, the kingdom has introduced the ancient Indian epics of Ramayana and Mahabharata into the school curriculum. (Middle East)

Comment:
There are some wicked people who take pleasure in crude, shallow attacks through caricatures, hiding behind ‘freedom of speech’. Others, claim to be Believers, but attempt to undermine Rasulullah’s (saw) unique achievement in removing all sherk (polytheism), idolatry and Jahiliyyah from the Hijaz.

Rasulullah (saw) brought the Message of Tauhid and along with his noble companions, purified the Hijaz from sherk, spilling their blood through Jihad. Islam has singularly done more to enlighten and rid the world of sherk and idolatry than either Judaism or Christianity or both combined.

Yahya related from Malik from Ibn Shihab that the Messenger of Allah(saw) said,

The kuffar are not allowed to visit the Haram and yet these illegitimate rulers of ‘Saudi’ Arabia are inviting sherk into the minds of the children of the Believers.

For what benefit? To what end? To please the kuffar? Does doing yoga and teaching kufr and corruption of the mushrikeen raise them in the eyes of their masters? And worse, they hide behind ‘economic progress’; as if there were no other way except through bathing in kufr.

Is there no more critical knowledge that we can teach our children? For example the vital issue of the Ummah uniting under Islam? Or the haram of implementing kuffar? Or the illegitimacy of your corrupt illegitimate ‘kingdom’?

Is this something Rasulullah (saw) taught us we should do – to teach sherk to our children?

At the same time, these same so called rulers persecute and incarcerate our sincere scholars. What corruption were they ‘guilty’ of propagating? Were they teaching the sherk of polytheism? Or were they calling for the unity of Believers of Tauhid? Narrated Anas that the Prophet (saw) said,

“Whoever possesses the following three qualities will have the sweetness (delight) of faith: The one to whom Allah and His Apostle becomes dearer than anything else. Who loves a person and he loves him only for Allah’s sake. Who hates to revert to kufr (disbelief) as he hates to be thrown into the fire.” (Sahih al-Bukhari)

“You see many of them taking the disbelievers as their Auliya’ (protectors and helpers). Evil indeed is that which their ownselves have sent forward before them; for that (reason) Allah’s Wrath fell upon them, and in torment they will abide. And had they believed in Allah, and in the Prophet (Muhammad) and in what has been revealed to him, never would they have taken them (the disbelievers) as Auliya’ (protectors and helpers); but many of them are the Fasiqun (rebellious, disobedient to Allah).” [T.T.Q. Al Ma’idah: 80-81].

We know our illegitimate pretend leaders will do nothing to cross the benefit of their kuffar masters. However they will gladly kill, imprison, torture spend money, buy arms and weaponry and do ‘jihad’ for the sake of their masters and their ideology.

They will never lift a finger to move re-establish the ruling of Islam, the Deen and system of Rasulullah (saw). Rather they fight it. It is time to remove these traitors and servants of kufr.

This Ramadan, for Allah’s sake, it is time to understand Islam in the way Rasulullah (saw) brought it and how he established Islam. We must act. No more forcing corruption upon our innocent children. We cannot allow kufr and taghut to trample our Ummah one day longer.