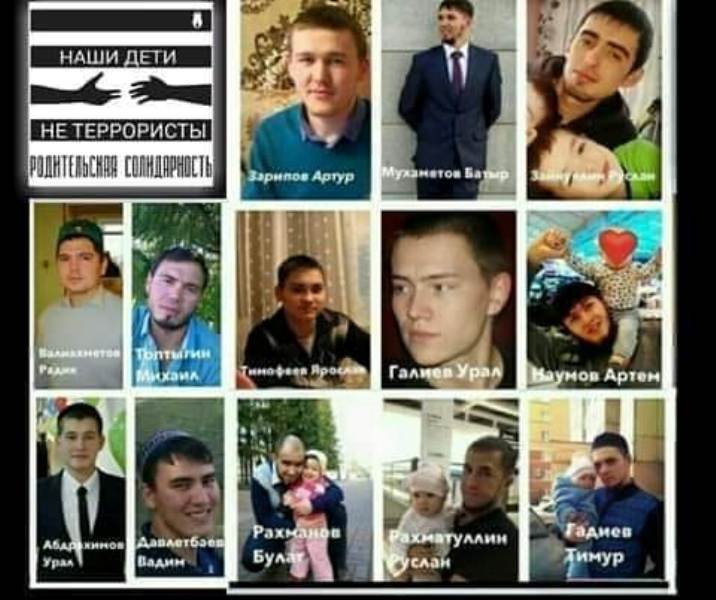 On February 21, 2019, the Privolsky Military Court sentenced members of Hizb ut Tahrir following a hearing in the Ardongkidovsk district of Ufa city. The judge considered them guilty of “terrorist” activities according to Article 205.5, Section I and II of the Constitution of the Russian Federation, and sentenced:

Those who denied membership in the party during the interrogation, namely, Naonov A and Gliyev W, they were sentenced to 11 years imprisonment. According to the court’s decision, convicts must serve their sentences in a maximum-security prison.

When Hizb ut Tahrir members heard the verdict, they said they were satisfied with Allah’s (swt) Qadaa (destiny) and shouted together, “The Ummah wants the Khilafah (Caliphate).” Smiles remained on their faces, and the attendees of the court from their families and relatives, raised a sign reading “We love you”, “we will wait for you”.

A week ago, on 15 February, the Moscow Military Court sentenced nine Shabab from Central Asia who are accused of participating in Hizb ut Tahrir activities.

These judicial rulings share not only the injustice but as well as they came at the recommendation of the security agencies against the Dawah carriers, in spite of this injustice the Dawah carriers spoke the Truth in the courtroom before pronouncing the verdict. Unfortunately, the nature of this press release does not permit the presentation of the texts spoken by each Dawah carrier, so we have limited ourselves to present some excerpts.

In the name of Allah Almighty, Muhmmadov Bateer called on all those present in the hall to obey Allah the Lord of the Worlds, and then continued: “I have never hidden being a member of the Islamic Hizb ut Tahrir and I do not intend to do so now. I do not confess the guilt and I am not guilty. Allah (swt) created this world, where the struggle between Khair (good) and Shar (evil) and between Kufr (disbelief) and Iman (belief) has always been. I emphasize that, because of this cursed law banning the Hizb in 2003, many Muslims suffer from persecution and imprisonment for long periods, and some have been forced to hide. Women remained without their husbands, children without their parents, and parents without their children. I am a Muslim who is carrying the religion of Islam, and they persecute me only because I say Allah is my Lord. I will conclude with the words of Allah Almighty: ﴿قَالَ لَئِنِ ٱتَّخَذتَ إِلَٰهاً غَيرِي لَأَجعَلَنَّكَ مِنَ ٱلمَسجُونِينَ﴾ “[Pharaoh] said, “If you take a god other than me, I will surely place you among those imprisoned.”” [Ash-Shu’ara: 29] There is a big similarity, is not it? Thank you.”

Another person in the case of Ufa, Tuptigin Michael began his speech by reading a poetry which he composed about what is going on in the courtroom, he said:

“The empty eyes of the judge, are not human, seem to be looking at me

saying you will be sent to prison forever,

I do not want to judge you with justice, Justice is in outside, and there is no crime here.

But you have chosen for yourself a fate, you are a prisoner of conscience, and everything is forbidden for you”.

Then Michael added: “Unfortunately, it is not forbidden in Russia to call for religion, so you resort to lying against us, and you cannot do any more than this. Every Muslim yearn to live according to the rulings of Allah. We are imprisoned and will be imprisoned, and I think the judge will increase the sentence because of this. We are imprisoned because we yearn. Think about your lives, O people, it is not eternal, and it will come to an end inevitably… and when we reach the graves, two angles will come down to us to ask questions that must be answered”

In other speeches, they spoke with pride that they were members of Hizb ut Tahrir and quoted verses from the Quran and the Prophet’s (saw) hadiths. Walid Hamidov Radek said that what is happening in the courtroom is only persecution of Muslims because of their faith. And this increases their steadiness and strength, like a blade is sharpened with hitting. He concluded by saying that he is proud because he is being tried with real men from the Islamic nation.

After hearing one of the speeches, Muslims present in one of the courtrooms all cried, and in another room when the judge pronounced the sentence, they said no crime here and that this indicates a crusade against Islam.

The last speech of Hizb ut Tahrir members in the Moscow trials before the verdict was a call to the right and that what is happening is a policy of hostility followed by Russia against Islam.

All the speakers quoted verses from the Quran and compared the past to the present. The last words of the Hafedh (memorizer) of the Book of Allah, Sardorbek Sadikov, who was arrested this time a only few months after leaving prison where he was spending a sentence because of giving a speech in Moscow mosque against the prohibition of one of the translations of the Quran. He told them about the prophets of Allah, Abraham and Moses peace be upon them, and that he also depends on Allah as the prophets, Allah (swt) said: ﴿قَالَ كَلَّا إِنَّ مَعِيَ رَبِّي سَيَهْدِينِ﴾ “[Moses] said, “No! Indeed, with me is my Lord; He will guide me.””  [Ash-Shu’ara: 62]

Hamid Eghamiriyev explained the reality of “terrorism” and stressed that “terrorism” which causes safe people to die is not the method of Hizb ut Tahrir, and it is a haram action. Then he explained the work of Hizb ut Tahrir in Russia by saying “the work of Hizb ut Tahrir in Russia is to call for the religion of Islam, explain the Islamic culture, show the reality of the Islamic nation, give opinion in the political processes in the world and expose the plans of the colonial countries against the interests of the Islamic nation.” He demonstrated the method to establish the state by saying: “As you can see, the Prophet did not use “terrorism”.” He added: “In the Quran, Allah (swt) says: ﴿كُنتُم خَيرَ أُمَّةٍ أُخرِجَت لِلنَّاسِ تَأمُرُونَ بِٱلمَعرُوفِ وَتَنهَونَ عَنِ ٱلمُنكَرِ وَتُؤمِنُونَ بِٱللَّهِ﴾ “You are the best nation produced [as an example] for mankind. You enjoin what is right and forbid what is wrong and believe in Allah…” [Al-i-Imran: 110].

In this verse, Allah Almighty says that Muslims are the best nations that were brought out to the people, note, not for the sake of the destruction or oppression of other nations but for the good of the nations, and for that we must call for good deeds and keep away from evil. That is why I joined the ranks of the Islamic Political Party. The party calls for the good of all humanity, but they lie about the party as they lied about Moses, Jesus and the Prophet Muhammad, peace be upon them all. “Then he addressed the judge saying:” I call you not to pretend that you do not see, hear, and do not understand. You are aware of everything, I invite you not to be part of the persecution machine…”

In conclusion, we quote excerpts from the words of Zavar Nadirov: “I am Nadirov Zavar Gvarovich, a member of the Islamic political party Hizb ut Tahrir. From the first day I did not deny being a member of the party and I do not intend to do so. The membership of this party does not make the person guilty or criminal, on the contrary, this is the obligation of Allah and the order of our religion … I do not confess to what you accuse me of, and I do not admit my guilt. I am not a terrorist, I do not recruit anyone. I declare that Hizb ut Tahrir is an Islamic political party. No one has mentioned or came up with evidence that the party is doing a (terrorist) act … We call for Islam and you accuse us of “terrorism” … Lawyers who defend us by law know that we are not terrorists and we are not criminals. But I do not think you will care about this … Your goal is to destroy the Islamic idea, you imprison us for long periods, and I want to anger you. You have imprisoned many before us, and today we are here and you will judge us, but this does not intimidate us, because you will not imprison all Muslims. Today, Russia is fighting Islam, but know that the Islamic idea will inevitably win, whether you like it or not. This the promise of Allah and the promise of His messenger (saw). The Quran was sent to all humanity to bring it out of darkness to light. In conclusion, justice will triumph and praise be to Allah the Lord of the Worlds.”

We see that any comment here will be extra.