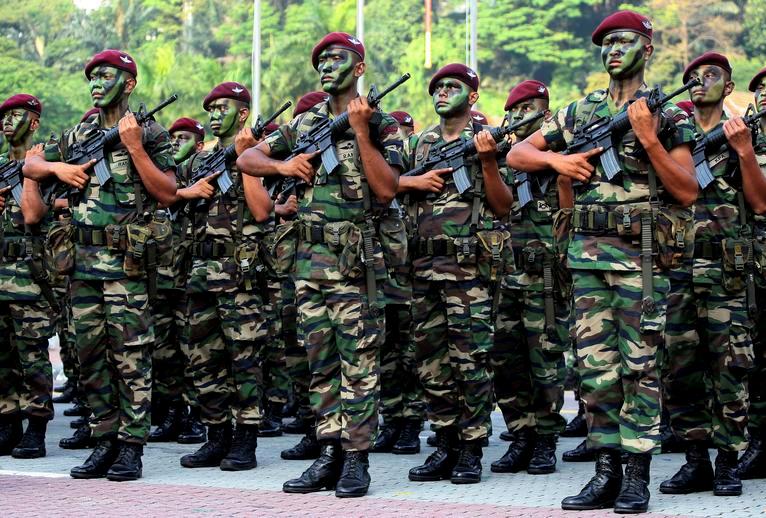 Hizb ut Tahrir / Malaysia held a peaceful assembly and delivered a call at the vicinity of Masjid Wilayah, Kuala Lumpur, right after Friday prayers on 15/09/2017 concerning the Rohingya crisis. The latest torture and killings committed by the Myanmar regime and Buddhist terrorists on Rohingya Muslims in Arakan are excessively inhuman, indicating their extreme hostility and hatred towards Islam and Muslims. In its call, Hizb ut Tahrir stressed that the Rohingya Muslims’ problem would never be resolved through world organisations such as the United Nations (UN), the Organization of Islamic Cooperation (OIC) or the Association of Southeast Asian Nations (ASEAN). The Rohingya Muslims’ crisis will also not be resolved through series of drama and the rhetoric of the Muslim leaders.

Hizb ut Tahrir views this issue from two perspectives namely that of a victim and a predator. For the victims, yes, they indeed need humanitarian aid, but for the predators, the Muslim armies must move in order to eradicate them. For so long as the predator is not eradicated, then there will always be a victim. Eliminating the predator is the only way to completely resolve this issue and jihad fi sabilillah is the only way to answer all the atrocities and brutalities of the predator. Indeed, there are no other means to save the Muslims in Arakan from these endless forms of oppression, torture and murder unless the Muslim armies declare jihad on the Kuffar Myanmar.

Hizb ut Tahrir calls upon the Muslim Ummah to unite their voices and struggle to show to the world in general and to the Myanmar regime in particular, that the Muslims are one Ummah and will not remain silent on what is happening to their brothers. Hizb ut Tahrir will never stop its call and will continue to work until the Muslim armies are dispatched or until the Khilafah (Caliphate) upon the method of Prophethood is established, which will save the Muslims of Arakan and teach the Myanmar regime a lesson. In its call, Hizb ut Tahrir emphasized that we can no longer put hope in the rulers, but we do hope that the sincere Muslim armies who are aware of their duties and responsibilities, will launch jihad on the Myanmar regime.

Without doubt, we direly need an Islamic State ruled by a Khalifah with al-Quran and al-Sunnah, who will InshaAllah move the army and launch jihad fi sabilillah to save the oppressed Muslims in all parts of the world. Indeed, the Khalifah will shatter the cruelty and disbelief and transform misery and darkness into prosperity, light and grace for all mankind. O Muslims, come and join Hizb ut Tahrir! Let us unite our voices and struggle for the good of this ummah and for our own good in this world and the hereafter. Re-establishing the Khilafah is an obligation and with the will of Allah, the Khilafah al-Rashidah ala minhaj nubuwwah shall soon be back to rule the world for a second time.