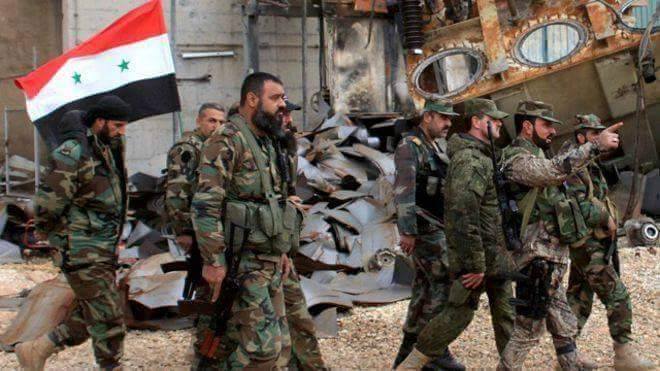 The repressive and authoritarian regimes, especially the regime of repression and criminality in Ash-Sham, have been robbing the will of the Ummah, violating its sanctities, and targeting it with repressive intelligence apparatuses, instilling in them fear and terror, until people did not dare to talk to their closest relatives about public affairs.

After the blessed revolution of Ash-Sham, the revolutionary people of Ash-Sham managed to break the wall of fear and marked great heroism that overthrew the legitimacy of the system of murder and criminality, and humiliated it.

With the emergence of the factions of different directions and names and the association of its leaders with foreign countries through poisoned political money, the compass of these factions has deviated from working to overthrow the regime to try to impose control over the liberated areas and fight each other to expand this control.

In their quest, and in the absence of a caring mentality and the existence of the authoritarian mentality, the factions resorted to repressive practices and worked to rob the people of power again, and even transgressed to attacking private property and violating the sanctities and unjust bloodshed, thus people lost confidence in the factions that instilled terror in the hearts of many of their public support, due to their security practices.

The repressive practices and the attacks on sanctities and private property were not the only measure they took, but the voices of the “legitimate” ones from here and there were raised, in an open attempt to legitimize repressive security practices and encroachment on the sanctity of people, in a position reminiscent of their fatwa and legitimate justification of alleged fighting between them, and to appease the system of murder and criminality in Damascus.

We remind the sincere ones of our Mujahideen brothers not to be dragged into the trap of repression over their people and their public support. We remind them of the crime of violating private property and the injustice of the people. They did not came out in revolution except to lift the oppression and injustice from themselves and their people who are considered their real support, if they lose it, there will be no support or help, only a mirage of a fake support that will disappear in the hour of truth. Before that, we remind them of the Hadeeth of the Messenger of Allah ﷺ: «الظُّلْمُ ظُلُمَاتٌ يَوْمَ الْقِيَامَةِ» “Oppression will be darkness on the Day of Judgment.” [Agreed upon]

So beware of injustice and beware of the one who commands you to carry it out by giving you suspicious fatwa. And return as you came out in your revolution, supporting Allah and His Deen, and supporters of your people and your brothers who wait for your help after Allah’s help, and support them against the oppressors, and not to help the oppressors against them.

We remind our people who are steadfast in the revolution of Ash-Sham and they are the men who revolted against the most oppressive and criminal regimes and all its security apparatuses and military forces, who made the greatest sacrifices for that purpose, that they must halt the hands of the oppressors and the new oppressors. To remain silent on their oppression, will increase their repression on us. Our noble Prophet ﷺ commands us to stop the hands of tyrants and oppressors. He ﷺ said: «كَلَّا، وَاللَّه لَتَأْمُرُنَّ بِالْمَعْرُوفِ، وَلَتَنْهَوُنَّ عَنِ الْمُنْكَرِ، ولتَأْخُذُنَّ عَلَى يَدِ الظَّالِمِ، ولَتَأْطرُنَّهُ عَلَى الْحَقِّ أَطْراً، ولَتَقْصُرُنَّهُ عَلَى الْحَقِّ قَصْراً، أَوْ لَيَضْرِبَنَّ اللَّه بقُلُوبِ بَعْضِكُمْ عَلَى بَعْضٍ، ثُمَّ ليَلْعَنكُمْ كَمَا لَعَنَهُمْ»  “Nay, by Allah, you either enjoin good and forbid evil and catch hold of the hand of the oppressor and persuade him to act justly and stick to the truth, or, Allah will involve the hearts of some of you with the hearts of others and will curse you as He had cursed them”. [Abu Dawud and At-Tirmidhi]

And you are able with the help of Allah and trust on Him to deter the oppressors and change them and replace them with the sincere ones from your brothers.

The real authority belongs to you, do not forsake it and give it only to those who deserve it, do not waste your sacrifices, and beware of relying on the oppressors, so renew your trust in Allah and your covenant with Him Azza Wa Jal, by supporting Him and his Deen and work with those who work to uphold his Deen and  establish His law under the shade of the Khilafah (Caliphate) on the method of Prophethood, which will take care of our affairs by the law of Allah (swt) and fulfills the rights of the people and removes with its justice the oppression and the oppressors.

“And Allah is predominant over His affair, but most of the people do not know” [Yusuf: 21]

Head of the Media Office of Hizb ut Tahrir