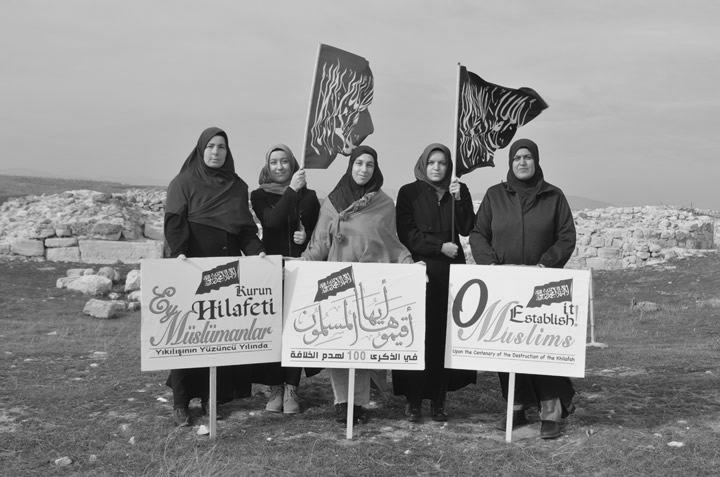 İn light of the campaign launched by Hizb ut Tahrir on February 13, 2021, entitled “Upon the centenary of the destruction of the Khilafah… O Muslims, Establish It!” we in Turkey did our part to support the campaign similar to what is happening in different cities of the world, and in this context we filmed videos about the Khilafah (Caliphate) in historical places in many different cities in Turkey. A video clip was filmed in Amouriyah (Amorium) in Afyon Karahisar, reminding Muslims of the help of the Muslim Khaleefah, Al-Mu’tasim, for the cries of help by captive Muslim women. As a result, the Ankara Security Directorate raided the homes of five of our sisters on the morning of February 23, 2021, and arrested the five sisters on the pretext of filming the video clip. The five sisters, including a sixteen-year-old sister, were taken to Afyon at the request of the Turkish Republic Prosecutor’s Office, and the interrogation continued for three days before they were released on parole today with judicial supervision from the court. Also, the Security Directorate in Bursa arrested three brothers on Sunday, February 20, for filming the video clip in front of the tomb of Ertugrul Ghazi in Sogut Bilecik as part of the campaign, and the Istanbul Security Directorate arrested five brothers for filming the video in Uskudar.

We in the Media Office of Hizb ut Tahrir in Wilayah of Turkey remind the rulers firstly, and we remind all the segments that contribute to such grievances, and we say:

1- Hizb ut Tahrir, which was founded in Palestine in 1953, and has practiced its political activities in Turkey since 1959; is an Islamic party, whose work is limited to intellectual and political activities, and does not include any violence or material work. Despite this, its members in Turkey have been subjected to countless repression, grievances and defamation over the past sixty years. This repression, grievances and distortions continued unabated, whether in the rule of the Kemalist secularists, agents of Britain, the enemy of Islam and Muslims, or of the military junta in a military coup, or the Justice and Development Party in the recent period. Our brothers were arrested, tortured, and subjected to exile and alienation, and harsh sentences were passed against them. But this repression, distortion, punishments, and injustices did not affect our brothers, and they did not succeed in preventing them from their call at all, on the contrary, it sharpened their eagerness and determination, and with the help of Allah, all kinds of tricks, treachery and distortion campaigns have failed, and they will not be able to undermine Hizb ut Tahrir and its pure call, and will not intimidate its members, or distract them from its call, by the will of Allah (swt).

2- Your sisters who were arrested from their homes in Ankara addressed their calls to you, referring to the Caliph of the Muslims Al-Mu’tasim, who mobilized a great army from Baghdad to Amuriyah to help a Muslim woman who fell under the captivity of the Romans. But you closed your eyes to the help of women and children all over the world, and your ears were deafened, and your tongues were silenced, and as if that was not enough, you arrested these Muslim women, whose only sin is that they said our Lord is Allah, and they seek the establishment of the Khilafah.

3- The call for the Khilafah is not a sin in the sight of Allah, nor in the sight of those who believe in Allah and the Last Day. Rather, it is a Shar’i obligation, and a place of pride, honor and dignity. We are honored and proud of what we do. All these arrests and campaigns will not succeed in diverting us away from this blessed, benevolent call, and know very well that we will never fail in calling for the Khilafah and work for its protection.