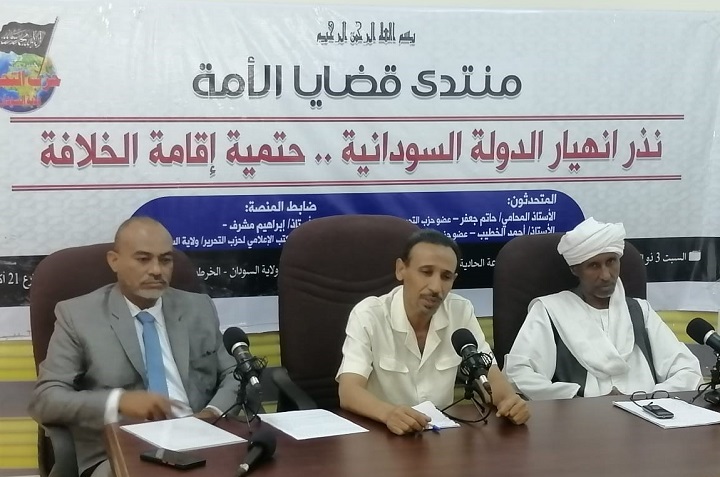 Despite the closure of roads and bridges, and the heavy deployment of soldiers in the capital, Khartoum, with extensive details, effective treatments, and an informed view of the events, the Media Office of Hizb ut Tahrir in Wilayah of Sudan held the monthly Ummah Issues Forum on Saturday, 2/7/2022, entitled: “The Omens of the Collapse of the Sudanese State… The Inevitability of Establishing the Khilafah (Caliphate).”

The first speaker, Mr. Hatem Jaafar (Abu Awab), presented a paper entitled: “Factors of the Collapse of the Sudanese State,” in which he explained that among the ABCs of high-end political thought is that states are created on ideas, and the authority in them is transformed by the transformation of these ideas, and he gave an example of a number of states based on ideas where the Islamic State arose in Medina on the doctrine of Islam, and European countries arose on the doctrine of the separation of religion from the state in the secular democratic capitalist system.

Ust. Hatem indicated that the weakness factors that threaten the collapse of the Sudanese state are ten, which he classified into two parts:

As for the first section, they are the factors that the Kafir colonizer himself planted, supervised and maintained, before he left his armies in what is known as the pride of independence, and they are:

2- Placing the native administrations and the leaders of tribes and clans as part of the state apparatus entrusted with the care of affairs.

3- Dividing the lands, including forests and pastures, on the basis of the tribe, with what is known as Al-Hawakeer.

4- Creating national parties that adopt the projects of the colonial Kafir.

5- Armed movements rebelling against the entity of the state.

In the second section, Ust. Hatem explained that the factors of the second section that resulted from the international struggle for influence in Sudan. After the Second World War, America emerged as a country competing with Europe in the international struggle over the colonies. They were assisted by the employment and betrayal of politicians and rulers. The colonists made tools for this. The struggle of parties, political forces and military leaders, all of this added five elements to the collapse of the state:

1- Adoption of federalism and self-government for the different regions of the country, and the matter reached self-determination that led to the separation of the south.

2- The curse of wealth; where wealth turned into a curse, because there is no strong entity to prevent the hands of tampering with the wealth of the country. Villages were abandoned and people were killed because their lands were rich in wealth.

3- The hateful racist political discourse that spreads hostility between the people of the country, which is presented by the suspicious politicians and leaders, visitors to foreign embassies and agents of the colonizers.

4- Provoking regions, ethnicities and tribes, and making them a basis for political action.

5- Making a way for the Kufr West to be against Muslims, and to arbitrate it in all the issues of the country, as the colonial countries and their organizations interfered in the affairs of the country, such as the American and British ambassadors and envoys, the United Nations mission UNITAMS.

As for the second speaker, Ust. Ahmed Al-Khatib who presented the second paper entitled: “The Inevitability of Establishing the Caliphate,” in which he clarified important points for the establishment of a strong state:

1- Islam is the only principle capable of addressing the collapse of the state, because the principle in the state is based on a principle, and Islam is a comprehensive principle for all the details of life.

3- Banning racist discourse, for Islam forbids and prohibits it.

4- Political parties in the Khilafah State are based on the Islamic faith, not on a regional basis or any idea that contradicts Islam, such as democracy and others.

5- The system of government in Islam is a unit system, not a federal system.

6- It is strictly forbidden for a foreigner to interfere in the affairs of Muslims.

And he indicated that the State of Islam, the Khilafah Rashidah (Rightly-Guided Caliphate) on the method of the Prophethood, is able to address Sudan’s problems, including clear legislation and provisions, and that Sudan is rich in wealth if it is well managed and returned to its people according to the provisions of Sharia.

At the end of the forum, the presenter, Ust. Ibrahim Musharraf, thanked the honorable attendees for their participation.