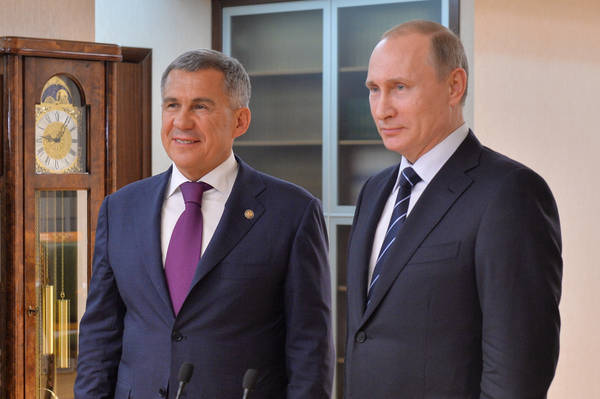 The Tatars’ struggle to preserve their mother tongue in compulsory school education programs reached a settlement with the Kremlin. The President of the Republic, Rustam Minnikhanov, stated that the solution reached to preserve the language in compulsory education had been shortened to two hours per week. As such, the authorities came out of the impasse they were in following the instruction given by Vladimir Putin to the monitoring bodies to inspect on studying the national language subject in Tatarstan schools.

However, preserving the language is not equivalent to preserving the identity, meaning that language itself does not mean anything if it does not protect the foundations of the people. Therefore, every person who seeks to protect the identity of the Tatars must look back at the history of its people and recognize that the starting point of the development was the embrace of Islam, through which the correct aspirations and references for behavior were formed. This means that Tatar language needs protection because it supports the protection of the bases of Islam for the Tatar people, because they study their religion in this language. In other words, in order to preserve the identity of the Tatars, intellectual relations based on Islam must be preserved, otherwise, the Tatar language will be the basis of nationalism, which in itself will lead the people to decay and cannot be related to their development.

A clear example of this decay is Chechnya, where their language is preserved as well as the customs, but the intellectual relationship on the basis of Islam has been lost. We have seen with our own eyes how this courageous, freedom-loving people have been turned into submissive people, although this quality is not commensurate with their mentality. All this was the result of commitment to nationalism and in a second place was the basis of Islam. So, by destroying the foundations of the resistance on the basis of the Aqeedah and then bringing a person to the presidency of the republic who makes people live in fear, the authority was able to change the mentality of the people. Many Chechens to date cannot accept that there is meanness, cowardice and other such qualities in their people. So, what do they say about the fact that there are homosexuals among this people?! This decline can only be brought to an end if people’s relationships are built on the creed and language, while customs complement these foundations, but not vice versa. The people of Quraish before Islam also were distinguished by courage and goodness, and one example of that era is Umar ibn al-Khattab (may Allah be pleased with him) who said: “Allah gave us honour through Islam. If we ever seek honour through anything else, Allah will humiliate us again.”

Going back to the language, we can take the example of the Russian people; even the Russians at one time, had strong family bonds distinguished with pride and they fought duels to preserve honor and dignity. That is to say, the sons of this people had such qualities which we can now be seen only in the literature. Today, regardless of the retention of the Russian language, are a different people, which changed immediately after leaving the foundations of Christianity and is still changing under the pressure of capitalism, where interest has become the basic criterion of behavior, and the abnormal sexual relations became normal. That is, the Russian language could not help the people to maintain their identity or values, which were inherent in it.

However, Islam, unlike Christianity, is and will remain a vital religion and needs only the resumption of its application in order to push the peoples towards revival and enhance their aspirations, as well as secure those customs that will be a reliable protection from the interference of alien ideas and values.