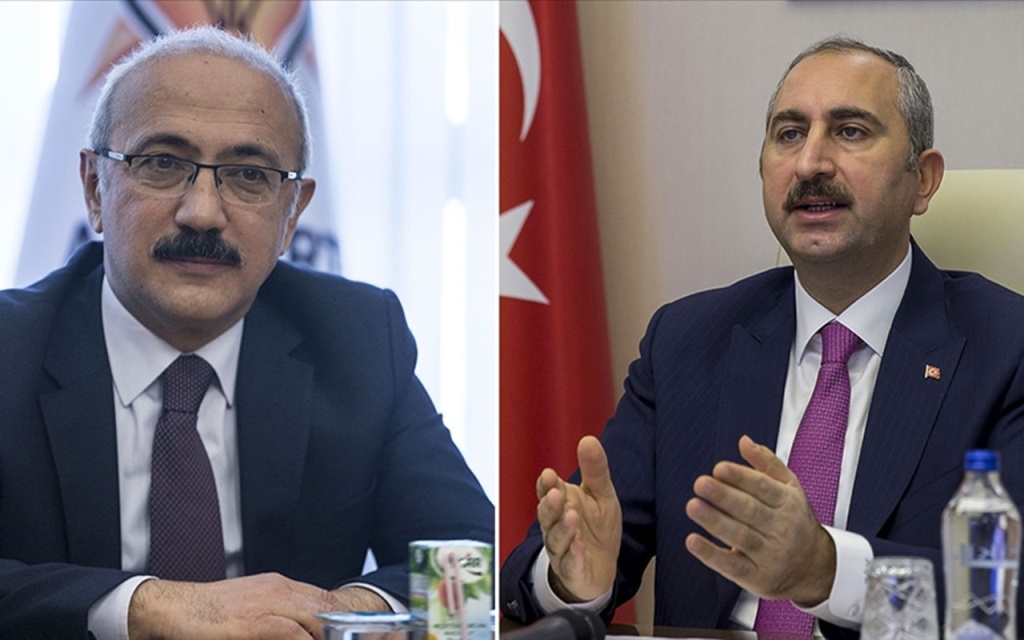 Turkey’s Treasury and Finance Minister Lutfi Elvan and Justice Minister Abdulhamit Gul gave start to consultation talks within the framework of “Economic and Judicial Reform” efforts. They held their first meeting on November 27, 2020 with the management of the Turkish Industry and Business Association (TUSIAD) in the Dolmabahce presidential working office.

And the very next day on November 28, 2020, they held a meeting with the management of the Union of Chambers and Commodity Exchanges of Turkey (TOBB) in the same office. A day after these meetings, Presidential Spokesman Ibrahim Kalin and Justice Minister Abdulhamit Gul met with religious representatives, including Fener Greek Patriarch Bartholomew, the Chief Rabbi of Turkey Isaak Haleva, Armenian Patriarch of Turkey Sahak Mashalian, the Patriarchal Vicar of the Syriac Orthodox Church in Istanbul and Ankara Mor Filuksinos Yusuf Cetin.

The meeting was closed to the press and lasted about 3 hours. Kalin and Gul made statements after the meeting, Kalin said the following in his statement: “Our approach is that within the framework of the principle of equal citizenship, all citizens of the Republic of Turkey benefit equally and fairly in rights and freedoms and fulfill their citizenship responsibilities within this framework.” And Justice Minister Gul said the following: “The AK Party is presenting a freedom-enhancing, multiplying approach for all citizens.” The Republic of Turkey is a great state, it will continue to be strong with its minority and all its citizens, regardless of faith, with its peace and with its unity and solidarity. With this confidence, with this determination, we will continue to take all our steps.” (CNNTurk)

These meetings reminded us of the steps of the AK Party and Erdogan in the early years when they came to power. In those early years of coming to power, the AK Party was doing everything Europe and America said to fix the broken economy and to remove the wreckage of bankrupt banks, and was taking steps that pleased the capitalist capital barons in Turkey. On the other hand, it was holding meetings and consultation talks like it does today in order to please the seculars and liberals in Turkey, to show Europe and America a libertarian, reconciliatory, tolerant, democrat and secular AK Party identity and to prove itself to the West. Every time Erdogan went to America, he met with representatives of Jews there, and in Turkey, under the leadership of Gulenists who spread the idea of interfaith dialogue, he opened mosques, churches and synagogues at the same time, and he gathered the leaders of minority communities around iftar tables and flashed smiles of tolerance to the West. In the early 2000s, the AK Party was dying for 8.5 billion US dollars to be deposited into Turkey’s account in exchange for the first bomb to fall on Iraq, while on the one hand, it was in dialogue with non-Muslim infidels for Turkey to enter the EU.

Nothing has changed. The AK Party, which waited for the capitalist monopolistic investment groups’ words in order to fix the Turkish economy, which slept by the door of European banks from whom it would borrow at interest and which sold all public institutions under the name of privatization, is today still dependent on those investment barons. It tries to make a reform in the economy by preserving the interests of these blood sucking companies and not by listening to and meeting the needs of the people, workers and artisans. By giving confidence to the non-Muslims and by reassuring Europe of their rights and law, it tries to realize the judicial reform, and not by removing the aggrievement of Muslims and by setting those who are unjustly oppressed free from dungeons.

President Erdogan’s statement of ‘we have launched a mobilization in the economy and judiciary’ is not a message towards the Turkish public opinion, but a message towards the European and American public opinion. And by any means, today or tomorrow Erdogan will do the necessary for this message. And the necessary for this message is coming up with a solution for the court files followed by Europe and America. These files are files regarding Osman KAVALA, Selahattin Demirtas, Ahmet ALTAN and other journalists. A step further, Erdogan can even give instructions for the solving of the files of some persons from the Gulen group. Neglect the hard statements of Erdogan and the People’s Alliance partner Bahceli after what Bulent Arinc said about Selahattin Demirtas and Osman Kavala, these statements are statements towards the inner public opinion in Turkey, towards the AK Party grassroots. The real message in the statement of “We are launching a reform mobilization” is for Europe and America. And the AK Party government has revealed the necessary for it in the meetings with TUSIAD, TOBB and non-Muslim minority representatives. The expectation of these groups from judicial reform is the solving of files like KAVALA, DEMIRTAS. If these are solved, it is expected that investors will come to Turkey; in other words, this is aimed with reform. Otherwise, judicial reform does not make a sense to Muslims. Reform for TUSIAD, TOBB and minorities, and unfortunately oppression against Muslims.

The law strangeness in trials on Hizb ut Tahrir, who has 7 separate violation of right decisions against it, of the Supreme Court which is the highest judiciary in Turkey, is a clear indicator of this. Justice Minister Abdulhamit Gul says “Let justice be done though the heavens fall;” “courts should implement the decisions of the Supreme Court”, but after 2-3 days the courts ignore the decision of the Supreme Court and impose a sentence of 52.5 years on my 3 dear friends (Abdullah IMAMOGLU, Musa BAYOGLU, Osman YILDIZ) and me. They also impose a sentence of 7.5 years on dear Yilmaz CELIK. These courts are unjustly keeping nearly 20 members of Hizb ut Tahrir in dungeons in Konya, Bursa and Antalya.

“Do not think that Allah is unaware of what the wrongdoers do. He only delays them until a Day when eyes will stare in horror” [Ibrahim 42]