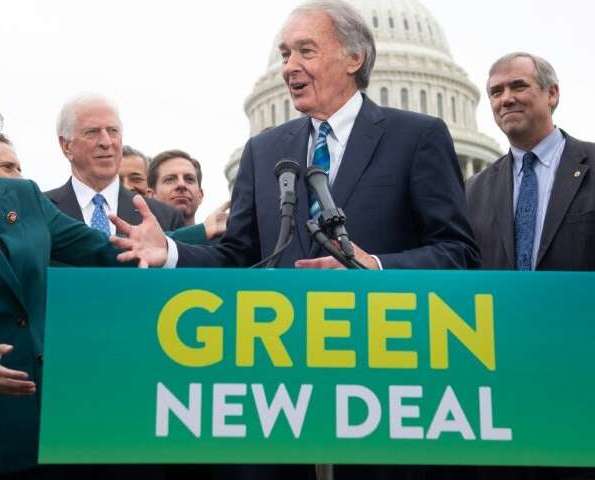 The Washington Post printed an article on the 12th of February entitled: “‘You can feel it now’: New Democrats push party, and 2020 candidates, to the left on divisive issues”. The story focuses upon a shift to the left in Democrat politics in preparation for the 2020 US presidential election campaign. “A new generation of Democrats is using far-reaching policy ideas and a brash social media presence to upend the party.”

The significance of this movement within the Democrat Party and its potential to lead to a radical shift in US politics akin to the conservative Tea Party movement and the rise of the alt right that brought Trump to power should not be overlooked. First, however, it deserves mention that the coverage of the New Green Deal proposal is throttled from the beginning by the language of constituency politics. The Washington Post points out that “the liberal shift, and the lawmakers driving it, are also creating challenges for Democrats in more-conservative areas”, which poses dilemmas for the new Democratic House Speaker, “who is trying to manage a band of outspoken new liberal members while also staying attuned to the needs of moderates hailing from swing districts that could be key to Democrats retaining the House majority in 2020.” Good reporting for sure, and the Post quotes a series of Democrats fearful that in their constituencies any shift to the left will make it harder for them.

This pandering to local constituencies is what hampers democracies from implementing any radical change. Indeed, democracies pride themselves in carving up authority between constitutional bodies in such a way as to make the exercise of power difficult. Hence, in the US, despite the building of a huge border wall with Mexico being a central promise of Trump to the electorate who voted him into office, he is unable to fulfill his promise, and now ponders signing a compromise deal to build a small wall on a small part of the border in order to open the government after the longest shut down in history. This schism has been between the president and Congress, which itself is divided into two sections: The House of Representatives and the Senate, where Democrats now have the majority in the House, while Republicans have the majority in the Senate. Perhaps the best place now to see the paralysis of this conflicted-by-design system is the UK, which is racing toward its BREXIT deadline at the end of next month with no one knowing what will happen in the most serious overnight shakeup of external relations for centuries, and all at a time when globalism and interconnectivities affect every aspect of the lives of citizens on a daily basis as never before! BREXIT became government policy thanks to former PM David Cameron’s electioneering gamble that holding a people’s referendum would get votes without consequence, as Britain could use the threat of withdrawal to get a better deal from the EU without fear that the British public may vote to leave. How wrong he was!

Now in the US we have a new shift further to the left in the Democrat party, and it is a reaction to the radical policies of the right. IF the US seems divided bitterly and unable to deliver much of what the Trump campaign promised, how much more divided and stalemated will the US government be if the Democrats gain an electoral victory in 2020 as a radical force pulling back against the Trump agenda? In all cases, the system is designed so that nothing too remarkable can happen and whatever one administration does will be revoked by the next, as with Obamacare and the Trans-Pacific Partnership (TPP). The path ahead for the New Green Deal, which aims to eliminate fossil fuels in ten years, and bring universal health care with heavier taxation of billionaires, will not be easy. Democrats, as Republicans, will always have at least one eye on what their constituencies want and will vote against their parties when their seats are threatened. What the proposed shift to the left will certainly do is to tap into the parallel vein of discontent that Trump was so successful with. Perhaps, the US can have an all new ‘let’s make America great again’ slogan – just with new talking points.