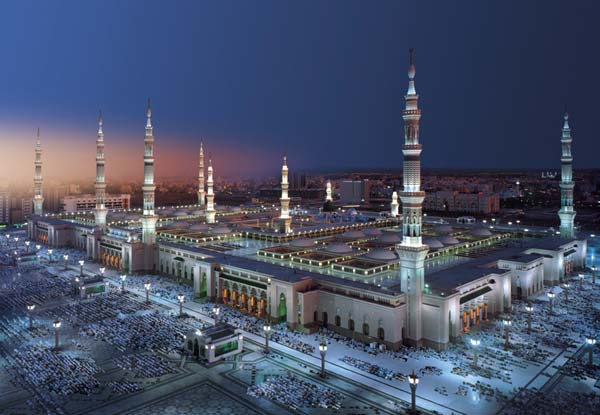 The Messenger of Allah (saw) was given the elevated status amongst all the Prophets (as). For Muhammad (saw) was not for a certain people for a certain time, like the previous Prophets such as those who were sent to the people of Aad, Thamud, Lut or Bani Isra’eel. No, Muhammad (saw) was for all races for all times, from the moment of his blessed appointment until the end of time. Allah (swt) said, ﴿وَمَا أَرْسَلْنَاكَ إِلاَّ رَحْمَةً لِلْعَالَمِينَ﴾ “We did not send you save as a Mercy to all of Humankind.” [Surah Al-Anbiyya 21:107]. Thus he (saw) came for all the peoples, the Arab and the non-Arab, the African and the Asian, the European and the American. His (saw) message was as a mercy for all humankind and for prevailing over all the other ways of life, even though those who make partners with Allah (swt) may dislike it.

How he (saw) took to this monumental responsibility that had never been bestowed before to any of the slaves of Allah (swt) and never will be again! How he (saw) strove restlessly, enduring great hardships with patience, speaking with wisdom and compassion, purifying souls of corruption and forging the firm foundation of a great Ummah in the form of mountains of men, his Companions (ra). There was confirmation within these Companions (ra) of his (saw) status as a messenger to all races, for within them was found Sohaib (ra) the Roman, Salman (ra) the Persian and Bilal (ra) the African, as well as the Companions from the numerous tribes of Arabia. He (saw) forged them upon Iman as a brotherhood built on the bond stronger than mere lineage and blood, the bond of love for Allah (swt) and His Messenger (saw). These firmly bonded rows of Companions (ra) then emerged as a structural marvel before the tribal structures of the time. Their very brotherhood struck at the bonds of tribalism, nationalism and racism, lowly bonds which deprive humankind of mercy by replacing compassion with enmity, co-operation with rivalry and security with continual conflict.

After the emergence of the people of RasulAllah (saw) within Makkah, the glorious message of Mercy lit up the Arabian Peninsula. It was a message of hope for the oppressed, languishing under the tribal system, and a warning for the oppressor, the cruel amongst the tribal heads. People from far and wide were attracted to its truth. However, at the same time the oppressors became steeped in arrogant rejection, their hearts hardened and sealed by their Kufr. They used their authority to persecute RasulAllah (saw) and all those who submitted to Islam. They spread lies about the message and the Messenger (saw), they gave chase and they tortured till martyrdom. Yet, RasulAllah (saw) persisted in his call, fearing none but Allah (saw). And he (saw) strove in secrecy, with stealth and wisdom, to seek the Nussrah, the Material Support, from its people, the men of war, by which to establish his Message as an authority and a rule.

And at this time of severe testing, Rabi ul-Awwal was witness to another gift, that of the Hijrah of RasulAllah (saw) to establish Islam as a state for the first time, in Madinah, Al-Munawwara, illuminated by the light of Guidance. Having secured the Nussrah from the two strong tribes of Madinah, Bani Khazraj and Bani al-Aws, the stage was set for his (saw) Hijrah from the oppression in Makkah to ruling by Islam in Madinah. Bukhaari in his Saheeh from Ibn Shihab who said that Urwah ibn al-Zubayr told him,

“and Muslims of Madinah heard of the departure of RasulAllah (saw) from Makkah… and they met RasulAllah (saw) in Bani Amr Ibn Auf’s tribe, and that was on a Monday in the month of Rabi ul-Awwal …” And narrated Ibn Hibbaan in his Saheeh from al- Baraa who said:

“The arrival of RasulAllah (saw) was on Monday on the night of the twelfth of Rabi ul–Awwal.” At-Tabari said in his history called “The History of the Messengers and Rulers”:

“We heard from Ibn Hamid, who said: We heard from Salamah, from Ibn Ishaaq, from Az-Zohri who said: RasulAllah (saw) arrived in Madinah on Monday of the night of the twelfth of Rabi ul Awwal.”

Thus Rabi ul-Awwal, was the month in which RasulAllah (saw), who had been granted the Nabuwwa (Prophethood) was now granted the Hukm (Ruling). Now the first Islamic state had been established, allowing Islam to be implemented in all its glory. RasulAllah (saw) established rulers over the regions, he (saw) appointed judges and established the foundations of a vigilant judiciary, he (saw) formed a state treasury, raising revenues and spending upon the citizenry and he (saw) raised a strong and powerful army. He (saw) invited the other tribes and nations, dispatching messages to the kings and emperors. He (saw) expanded the Islamic state, as his mission was to carry Islam as a Mercy to all of Humankind, with the people entering Islam in droves. Allah (swt) said,

“When there comes the help of Allah and the Conquest. And you see that the people enter Allah’s religion in crowds.” [Surah An-Nasr 110: 1,2]

And RasulAllah (saw) informed this Ummah of the fulfillment of his mission as a Mercy to all Humankind on the future. He conveyed the vision that Allah (swt) had given him, that of an earth over whose entirety the mercy of Islam prevails. And thus after RasulAllah (saw) returned to Allah (swt) the march of Islam continued. Under the Khilafah Rashida, the Ummah ensured that Islam prevailed over the empires of Persia and then Rome. He (saw) informed his Ummah (saw) of the opening of Constantinople, which occurred in time of the Uthmani Khalifah, and the opening of Rome, that we will witness inshaaAllah after the return of the Islamic state. And inshaaAllah upon the return of the Khilafah, this Ummah will rise again to ensure that Islam prevails over all other ways of life until the mission of RasulAllah (saw) is completed.

So, let Rabi ul-Awwal and the gifts it witnessed inspire us to raise the message of Islam, as a comfort for the oppressed and a stern warning to the oppressor rulers. Let the gratitude for its gifts grant us the patience and fortitude to be unwavering in our march for Islam, despite the oppression of the tyrant rulers. Let our love of RasulAllah (saw) spur us to strip away the false borders of nationalism that have divided us into over fifty countries and unify us as one state under the flag of La Ilaha Ila Allah Muhammad ur-RasulAllah. Let the Hijrah of RasulAllah (saw) that Rabi ul-Awwal witnessed motivate the men of war amongst us today, within our armed forces, to give the Material Support for the establishment of Islam as a state. And let Rabi ul-Awwal instill within us the urgency to complete the mission of RasulAllah (saw) as a Mercy to all of Humankind. Let us strive for the return of the Ummah, as a witness over all of Humankind, implementing Islam as a state and carrying its guidance such that it prevails all other ways of life.