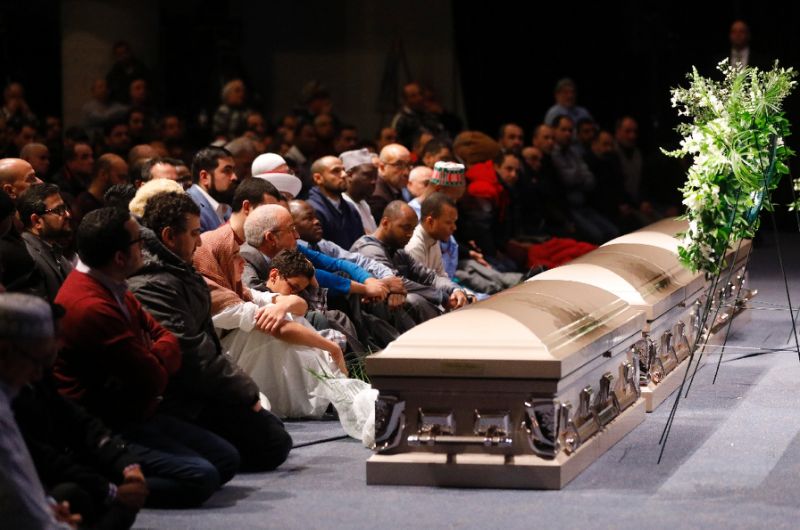 On Sunday January 29th, a mass shooting occurred at the Centre Culturel Islamique de Québec. The shooting resulted in the murder of 6 Muslims, as well as 5 others who were critically injured and 12 who sustained minor injuries. Currently, Alexandre Bissonnette of Quebec City faces 6 counts of first degree murder and 5 counts of attempted murder in connection with the shooting in the Masjid. According to media reports, he openly “attacked refugees or expressed support for Ms. Le Pen or Mr. Trump” on social media (Le Pen leads an anti-Muslim party in France).

Inna lillahi wa inna ilayhi rajioon. We express our heartfelt condolences to the families of the six brothers who were mercilessly killed during the attack. May Allah سبحانه وتعالى grant those who have suffered a loss in this attack patience and reward them for their loss. We also pray that Allah سبحانه وتعالى raises the dead as martyrs on the Day of Judgment – as the only thing they were guilty of was to seek closeness to their Lord by attending the prayer at the Masjid. Finally, we ask Allah سبحانه وتعالى who has power over all things to grant those who suffered injuries Ajr and forgiveness and complete healing from their wounds. Ameen.

“Wherever you may be, death will surely overtake you, even if you are in fortresses built up strong and high!”

Consequently, we should not let fear for our safety or the safety of those whom we love drive us to forget that death will only overtake us when our Ajal (time) comes; rather, we must only rely on Allah سبحانه وتعالى, for it is He who gives life and causes death, and to Him we shall return.

When examining the actions of the shooter, we are rightfully outraged at his action. However, at the same time we need to ask: Why was this man so hateful? Why did he hate Muslims and Islam?

Although some have attempted to link this man’s “extreme politics” to Le Pen’s visit in March of last year, the reality is that Quebec’s political class has been contributing to the emergence of anti-Islamic sentiments in Quebec for a long time. In March 2010, Bill-94 targeted Muslims by requiring women to remove their Niqabs (face veil). Jean Charest, the Liberal Premier of the Province of Quebec at that time, said: “Two words: Uncovered face.” In 2013, the Parti-Quebecois attempted to ban the Hijab through the Charter of Values. Although this ban theoretically affects all religions, it largely targeted Muslim women. During that time, there was an increase in the amount of open hostility from the intolerant elements of society towards Islam. Therefore, while such an attack is shocking, it is not surprising given the climate of hatred engendered and nurtured by such opportunistic politics.

Politicians in Canada, Europe, and the US are increasingly attempting to garner support from racist and xenophobic elements of society. We saw this with the federal Canadian Conservative party who targeted the Niqab and Muslims more broadly. We have again seen this with the rise of Trump who has promised and delivered the Muslim ban – starting with people from specific Muslim countries. In the US, just last Saturday, one day before the Quebec Masjid attack, a Masjid was burnt down in Victoria, Texas. In Europe, we have seen calls for the banning of the Hijab, the Niqab, and even the Qur’an!

Why is this happening?

As the Capitalist economy fails the masses, the political class in the Western Capitalist nations can either rise to the occasion and choose to make positive changes to alleviate the suffering of the people, or, alternatively, they can choose to push cheap politics that scapegoat Muslims and other minorities for the problems caused by a failing system. Unfortunately, it seems that the political class in the Capitalist nations have opted for the latter. The politics of fear and hatred also gives them a license to invade the Muslim world and interfere in the affairs of the Muslims in order to further their economic and political interests. The destruction of entire countries, such as Iraq, is the result of such policies.

Muslims everywhere should not succumb to the pressure to compromise in our Deen. Rather, we must remain strong in our trust in Allah سبحانه وتعالى, and arm ourselves with Thabaat (steadfastness) in the face of such hatred and violence, and continue to call for the true solution for mankind: the mercy and guidance in the systems revealed by Allah سبحانه وتعالى in the texts of the Qur’an and the Sunnah. May Allah سبحانه وتعالى grant us strength, protect us and our families, and make us of the steadfast on His Deen.