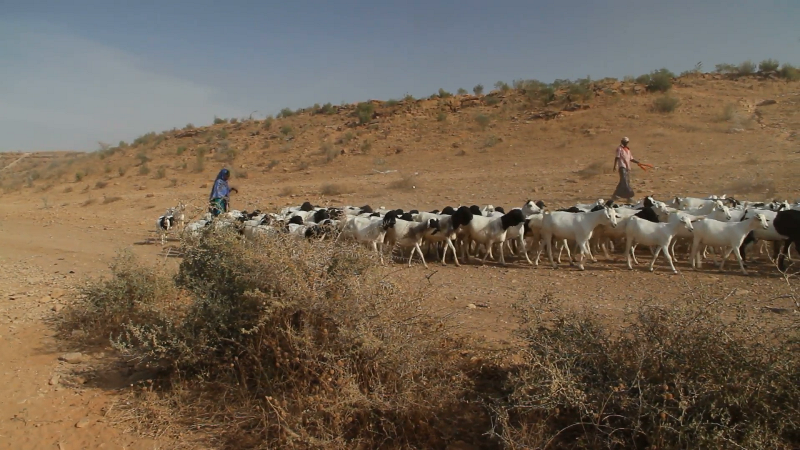 Assalamu Alaikum our Brother Abu Yaseen, may Allah protect you and give you long life,

As for the answer to question about the Zakat of livestock… We know that Zakat is obliged on pasturing sheep and goats, and no Zakat is on non-pasturing sheep and goats (al-ghanam). When the owner of livestock feeds his livestock for most of the year of his own expenses and only graze for a very small period of the year, with the purpose of increasing production since female sheep often give birth twice and this is the result of feeding it most of the year (and the sheep here is not for trade), is the Zakat obliged here or not? And Allah bless you.

Assalamu Alaikum, may Allah Bless you and reward you with goodness and bring victory to you.

To whom the Zakat of livestock is paid in the absence of the Khilafah?

Both your questions are about the Zakat on livestock and to whom is paid, so I made the answer to both of you together, which is as follows:

1- There is no Zakat on foraged sheep and cattle, because the “animal’s supplied food” describes the concept of the causation, and the concept of the attribute is to connect the legal ruling with an attribute from amongst the personal attributes. This shows the negation of the legal ruling for the individual when the attribute does not exist, and its condition is for this attribute to be distinctively clear, meaning that it fulfills the causation, and so if it doesn’t, then the concept ceases to exist. I repeat, the condition of the concept of the attribute must be a distinctively clear attribute, such as what he ﷺ said: «فِي صَدَقَةِ الغَنَمِ فِي سَائِمَتِهَا…» “…the owner has to pay one sheep as Zakat” (reported by Bukhari). The term “sheep” is a noun, and it has two attributes: pasturing and foraging, and so the obligation is upon those which pasture, yet not those which forage.

2- The evidence for this is as follows:

– Abu Dhar narrated from the Prophet ﷺ saying: «مَا مِنْ صَاحِبِ إِبِلٍ، وَلَا بَقَرٍ، وَلَا غَنَمٍ، لَا يُؤَدِّي زَكَاتَها، إِلاَّ جَاءَتْ يَوْمَ الْقِيَامَةِ، أَعْظَمَ مَا كَانَتْ، وَأَسْمَنَ، تَنْطَحُهُ بِقُرُونِهَا، وَتَطَؤُهُ بِأَخْفَافِهَا» “No owner of camels, cattle or sheep/goats will fail to give their due right except they will come bigger and fatter than they were, on the Day of Judgement to butt him with their horns and trample him with their hoofs.” (Agreed upon).

– Abu Dawood narrated from Abu Bakr from the Prophet ﷺ in a long Hadith that he said: «… وَفِي سَائِمَةِ الْغَنَمِ إِذَا كَانَتْ أَرْبَعِينَ، فَفِيهَا شَاةٌ…» “…and a female sheep (Shat) in grazing sheep and goats if they are forty…”

– Ali (ra) who said: «ليس في البقر العوامل صدقة» “There is no Sadaqah upon working cattle.” Narrated by Abu Ubayd and al-Bayhaqi.

– Also narrated from Amr ibn Dinar who said that he heard that the Rasuul ﷺ said: «لَيْسَ فِيْ الثَّوْرِ الْمُثِيرَةِ صَدَقَةٌ» “There is no Sadaqah on Muthira bovine which are used for ploughing the soil.” Narrated by Abu Obaida, who also narrated from Jaber ibn Abdulllah saying:  «لَا صَدَقَةَ عَلَى مُثِيرَةٍ» “There is no Sadaqah upon the Muthira.” and the term “Muthira” means animal used to plough the soil, making it ready for agriculture.

– Al-Hakim extracted in his book, Al-Mustadrak, two Hadith Sahih narrated by Baz ibn Hakim on the authority of his father on the authority of his grandfather, who said: I heard the Rasuul ﷺ say: «فِي كُلِّ إِبِلٍ سَائِمَةٍ فِي كُلِّ أَرْبَعِينَ ابْنَةُ لَبُونٍ…» “With regards to pasturing camels, for every forty there is a Bint Labboun (a two-year old camel)…” (reported by Al-Hakim that this Hadith is Sahih in its Isnad (chain of transmission) “The pasturing livestock: are livestock which graze in the prairies and farm lands without being foraged.”

3- Therefore, these three farm animals must have Zakat paid for them, as mentioned above, since the Zakat is upon the pasturing animals which have been grazing for more than a year, but no Zakat on the foraged sheep and cattle, as well as the working cattle does not.

4- In summary there is no Zakat on a variety of animals except for farm animals: sheep/goats, cattle and camels. As for animals in trading, there is Zakat on every animal whether it was for trading (i.e. selling and buying) since there are texts about such Zakat on everything which is used for trading, whatever the product is, whether it was seeds, cloths, or animals, etc. We shall mention some of the texts about trading merchandise:

– Abu Dharr narrated from the Prophet ﷺ who said: «وَفِي الْبَزِّ صَدَقَتُهُ» “There is Sadaqah in Bazz.” (Narrated by al-Daraqutni and al-Bayhaqi). Al-Bazz are clothes and woven material used for trading.

Secondly: To whom the Zakat on livestock is paid in the absence of the Khilafah, as stated in your question, as if you do not mean the beneficiaries of the Zakat rather to whom it is paid?

1- Zakat is paid, whether it is livestock, crops and fruits, currency or trading merchandise to the Khalifah or his representative such as governors (Wulat) or workers (‘Amileen) or whoever he appoints as collectors (Su’at) and employees (‘Amileen) over the Sadaqat. Allah (swt) said: خذْ مِنْ أَمْوَالِهِمْ صَدَقَةً تُطَهِّرُهُمْ وَتُزَكِّيهِمْ بِهَا وَصَلِّ عَلَيْهِمْ إِنَع صَلَاتَكَ سَكَنٌ لَهُمْ وَاللَّهُ سَمِيعٌ عَلِيمٌ “Take Sadaqah from their wealth in order to purify them and sanctify them with it, and pray for them. Verily your prayer is peace for them” [At-Tauba: 103]

Allah (swt) obliged His Messenger ﷺ in this Ayah to take Sadaqah from the owners of wealth, and the Messenger ﷺ used to appoint governors, workers and collectors to take the Sadaqah from the owners of wealth just as he would appoint estimators (Khurraas) to estimate the harvest of the palm and grape trees. People at the time of the Prophet ﷺ used to pay the Zakat to him or those governors, workers and collectors whom he appointed over the Sadaqah…. The situation continued like this after him… and Zakat used to be paid to the caliphs and their appointed governors. There are some narration reported from the Sahabah and followers (Tabi’in) allowing a person to distribute Zakat personally and to put it in its place in case of hard money i.e. currency. It was narrated by Abu Ubayd that Kaysan came to ‘Umar with 200 Dirhams as Sadaqah, saying to him: «يا أمير المؤمنين، هذه زكاة مالي»، “O Amir al-Mu’mineen, this is the Zakat of my wealth.” So ‘Umar said to him: «فاذهب بها أنت فاقسمها» “You go and distribute it yourself.” It has also been narrated by Abu Ubayd from ibn Abbas that he said: «إذا وضعتها أنت في مواضعها، ولم تَعُدَّ منها أحداً تَعُولُه شيئاً، فلا بأس» “There is no problem if you put it in its place and don’t give anything of it to anyone whom you support.” It was also narrated the statement of Ibrahim and Al-Hassan said: «ضعها مواضعها، وأَخْفِها» “Put it in its place and conceal it.” This is in relation to the hard money i.e. currency.

As for livestock, crops and fruits. these must be paid to the Khalifah or whoever he appoints, for Abu Bakr fought those who denied the Zakat, when they refused to pay it to the governors and collectors, saying: «والله لو منعوني عناقاً كانوا يؤدونه إلى رسول الله لقاتلتهم عليه» “By Allah, if they deny me one baby goat (‘Unaq) that they used to give to the Messenger of Allah I will fight them for it.” Agreed upon through Abu Huraira. If the Khalifah does not exist, it is permissible to be delivered by the Zakat payer to its beneficiaries, who are mentioned in the verse: إِنَّمَا الصَّدَقَاتُ لِلْفُقَرَاءِ وَالْمَسَاكِينِ وَالْعَامِلِينَ عَلَيْهَا وَالْمُؤَلَّفَةِ قُلُوبُهُمْ وَفِي الرِّقَابِ وَالْغَارِمِينَ وَفِي سَبِيلِ اللَّهِ وَابْنِ السَّبِيلِ فَرِيضَةً مِنَ اللَّهِ وَاللَّهُ عَلِيمٌ حَكِيمٌ “Verily the Sadaqat are (only) for the poor, needy, those employed upon it, those whose hearts are to be reconciled, slaves, debtors, those in the way of Allah and the wayfarers” [At-Tauba: 60]

The pillars of Islam are not to be disrupted in all circumstances and conditions, but are performed in the best possible way…

This is what I see regarding this issue, and Allah knows best and He is All-Wise.