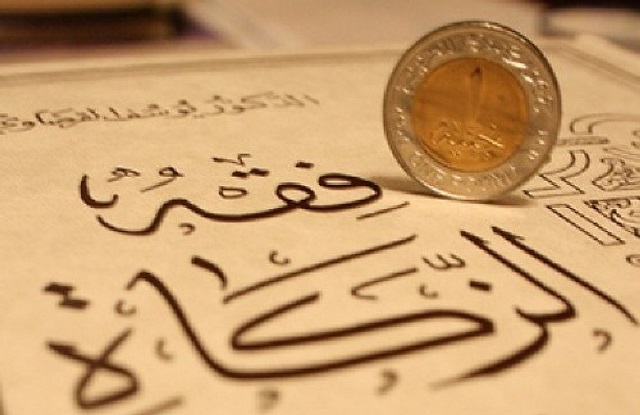 The savings of gold that for years in which zakat was not paid on it, is it paid for each year or once in a lifetime? And is the material payment permissible that is by its value? Thank you.

1- Before answering your question I would like to draw attention to the fact that saving gold and silver and money for a non-specific need is considered as hoarding even if you pay the zakat on it, and hoarding is haram, and the evidence of its prohibition:

Allah (swt) says: وَالَّذِينَ يَكْنِزُونَ الذَّهَبَ وَالْفِضَّةَ وَلَا يُنْفِقُونَهَا فِي سَبِيلِ اللَّهِ فَبَشِّرْهُمْ بِعَذَابٍ أَلِيمٍ * يَوْمَ يُحْمَى عَلَيْهَا فِي نَارِ جَهَنَّمَ فَتُكْوَى بِهَا جِبَاهُهُمْ وَجُنُوبُهُمْ وَظُهُورُهُمْ هَذَا مَا كَنَزْتُمْ لِأَنْفُسِكُمْ فَذُوقُوا مَا كُنْتُمْ تَكْنِزُونَ “And those who hoard gold and silver and spend it not in the way of Allah – give them tidings of a painful punishment * The Day when it will be heated in the fire of Hell and seared therewith will be their foreheads, their flanks, and their backs, [it will be said], “This is what you hoarded for yourselves, so taste what you used to hoard.” [At-Tawba: 34-35]

-Ahmad narrated through a correct chain of narration from Abu Amamah that he said: (تُوُفِّيَ رَجُلٌ مِنْ أَهْلِ الصُّفَّةِ، فَوُجِدَ فِي مِئْزَرِهِ دِينَارٌ، فَقَالَ رَسُولُ اللَّهِ صلى الله عليه وسلم «كَيَّةٌ»، قَالَ: ثُمَّ تُوُفِّيَ آخَرُ فَوُجِدَ فِي مِئْزَرِهِ دِينَارَانِ، فَقَالَ رَسُولُ اللَّهِ صلى الله عليه وسلم: «كَيَّتَانِ») “A man from Ahl Al-Suffah died, and a Dinar was found in his garment (waist-wrap); the Messenger of Allah ﷺ said: “he will be burnt”, then another died and two Dinars were found on him, and the Messenger of Allah said: “he will be burnt twice”.

Tabari narrated the same from Abu Amamah Al-Bahili. This means that it is haram to hoard gold and silver at all, even if it is two dinars, even if it is one dinar, as long as it is hoarding; that is saving up of money for no reason. And the Messenger ﷺ said that regarding these two men because they were living off charity and yet they had gold pieces, he ﷺ said: «Kayat» and said: «Kayatan» referring to the verse of Allah (swt): يَوْمَ يُحْمَى عَلَيْهَا فِي نَارِ جَهَنَّمَ فَتُكْوَى بِهَا جِبَاهُهُمْ وَجُنُوبُهُمْ “The Day when it will be heated in the fire of Hell and seared therewith will be their foreheads, their flanks,” [At-Tawba: 35]

2- If one saves gold for no purpose, then he has committed a sin because it is hoarding of gold, which is haram … However, he has to pay zakat on gold that he has saved for no reason, because the forbidden hoarding does not invalidate the obligation of zakat. The same goes to saving for a purpose, it is not haram, but the owner must pay zakat on it if the nisab is reached and the year has passed on it. This is because the permissibility to save up for a need does not invalidate the obligation of zakat.

3- The obligation of zakat is due on a (Hijri) yearly basis, if the money reaches “gold, for example,” the nisab and a year passes on it, the zakat is due on it, it is one-quarter of the tenth, or 2.5% of it. If one pays zakat on his money after the year, he would have fulfilled the obligation. But if he delays the payment of zakat on that year, it remains obligatory for him to perform it for that year. Its payment for one Hijri year does not take the place for another Hijri year, because zakat as mentioned above is an annual obligation that is renewed each year as long as its causes and conditions are in place.

For example, a person who has saved up gold five Hijri years, and gold has reached the nisab at the beginning of saving. He has to pay zakat of five years at the end of the fifth year if he has not paid zakat on this gold before Because the zakat of every Hijri year of those five years is an obligation on his neck and must be paid. He must pay zakat five times for that time (5 years), with the amount 2.5% of the gold he saved … Note that it is not obligatory for him to pay zakat on the amount of the first year that he paid, i.e. the 2.5 % rather he must pay zakat on the remaining 97.5% from the first year, so in the second year he will pay 2.5% of the remaining amount. The same goes in the subsequent years, it is noticed that there is a decrease on money of the person paying zakat after paying off zakat in previous years.

4- As for paying zakat in the value of the wealth rather than in same material is permissible, so instead of giving gold on gold, he can pay the value of the gold in banknotes, silver or the like.

In the Book “Funds in the Khilafah State” page 140 (English) it states the following under the chapters of Treasury’s revenues:

(It is also found in the Sunnah that the Messenger of Allah and his companions would oblige a right in money then change it to something else easier for its giver to give than the original money. Of this is the book of the Prophet to Muaz in Yemen on Jizya: “Upon each mature person is a Dinar or its equivalent in clothes (Mu’afir).” So the Prophet took goods instead of taking the specific thing itself i.e. he took clothes instead of gold. Of this also is what he wrote to the people of Najran: “Upon them two thousand garments every year or its equivalent in ounces of gold and silver.” ‘Umar (RA) used to take camels in Jizya instead of gold and silver, as Ali used to take needles, ropes and large needles in Jizya instead of gold and silver.) End quote.

In the Book “Funds in the Khilafah State” page 147 (English) it states the following under the chapters of Treasury’s revenues:

(Zakat on gold is paid in gold, representative currency and reliable currency. Zakat on silver is paid in silver, representative currency and reliable currency. Similarly, Zakat on gold can be paid in silver and compulsory currency while Zakat on silver can be paid in gold and compulsory currency, as they are all currencies and prices. So some of them can take the place of others and some of them can be paid in the place of others for the objective is verified in this. It has been mentioned in the chapter of Zakat on crops and fruits the evidences for taking the value as a substitute for the property upon which Zakat is obliged.) End quote

I hope this answer is sufficient.