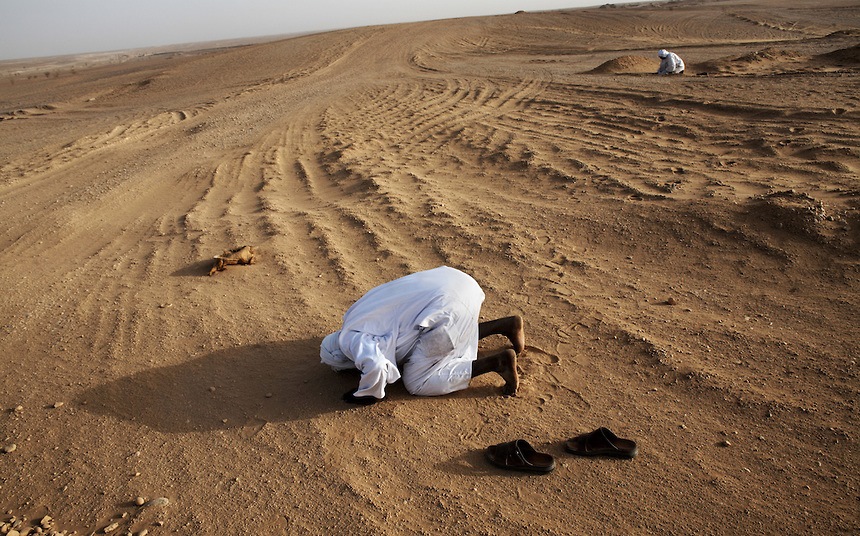 It is mentioned in the book “The Islamic State” at the end of page 11 (Arabic version): If they wanted to pray they would go to the wooded area and pray in hiding from their people, this was in the secretive stage of the call. So what was this prayer performed by the Sahaba in hiding from the people, and we know that prayer was prescribed on the night of Isra’, and whenever the word ‘salah’ (prayer) is mentioned in a text, it denotes to the prayer with specific rituals and movements and does not mean du’a?

There is a difference of opinion on the type of prayer the Muslims performed before the incident of Isra’ and Mi’raj…what we are inclined towards is that the Prophet ﷺ and Muslims before the five prayers were prescribed in Isra’ and Mi’raj, were praying two rak’as before sunrise, and two rak’as before sun set, here are some of the evidences for this:

First: The Asbab An–Nuzool (reasons for the Revelation) of Surat Al-Alaq, which is the first Sura revealed, were the following:

Muslim narrated in his Sahih from Abu Huraira (ra) that he said: Abu Jahl said: Does Muhammad cover his face with dust in your presence? He said: they said: yes, he said: By Al-Lat and Uzza if I see him do that I will stomp on his neck or I will cover his face in dust. He said: So he approached the Prophet ﷺ while in prayer, as soon as he moved to step on his neck, he said: he shocked the people by running away covering his face, he said; they asked him: What is wrong with you? He replied: there was a huge ditch of fire between me and him and awe and wings, the Propet ﷺ said: «لَوْ دَنَا مِنِّي لَاخْتَطَفَتْهُ الْمَلَائِكَةُ عُضْوًا عُضْوًا» “If he came closer to me, the angles would have snatched him, organ by organ”

He said: So Allah Azza Wa Jal sent down- we don’t know if it is in the Hadith of Abu Huraira, or someone relayed the information to him:

“Does he not know that Allah sees? No! If he does not desist, We will surely drag him by the forelock.  A lying, sinning forelock Then let him call his associates;  We will call the angels of Hell. No! Do not obey him”

Ahmad extracted a similar Hadith in his Musnad.

The author of Al-Bahr Al Muheet: “Ibn Atiya said: none of the scholars of Tafseer disagreed that the one who is forbiding (prayer) is Abu Jahl, and the the slave in prayer is Muhammad the Messenger of Allah ﷺ” [Al-Bahr Al Muheet (369/8)]

This Surah is the first Surah revealed that mentioned the prayer of the Prophet ﷺ and the aggression of Abu Jahl, this was in the secret stage, therefore there was prayer before Isra’ and Mi’raj.

Second: In the book “Al-Rowd Al-Anif Fi Sharh As-Sira An-Nabawiyah for Ibn Hisham” by Abu Al-Qasim Abdul Rahman As-Suhaili (deceased: 581 AH), in the chapter of the obligation of Salah, it mentions the following:

“Al-Muzni said that salah before Isra’ was before sunset and before sunrise, and the evidence for this is the saying of Allah سبحانه وتعالى: وَسَبّحْ بِحَمْدِ رَبّكَ بِالْعَشِيّ وَالْإِبْكَارِ “…and exalt [Allah] with praise of your Lord in the evening and the morning” [Ghafir: 55] Yahya Ibn Salam said the same.”

– Abu Muhammad Al-Ghitabi Al-Hanafi Badr Ad-Deen Al-Aini (deceased 855 AH) said in his book “Sharh Sunnan Abi Daoud”: “Salah (prayer) before Isra’ was one prayer before sunset and one prayer before sunrise, and the evidence is the saying of Allah سبحانه وتعالى: وَسَبّحْ بِحَمْدِ رَبّكَ بِالْعَشِيّ وَالْإِبْكَارِ “…and exalt [Allah] with praise of your Lord in the evening and the morning” [Ghafir: 55]”

“Salah before Isra’ was two: one before sunrise and one before sunset, Allah سبحانه وتعالى said: وَسَبّحْ بِحَمْدِ رَبّكَ بِالْعَشِيّ وَالْإِبْكَارِ “…and exalt [Allah] with praise of your Lord in the evening and the morning” [Ghafir: 55]”

This proves that the Prophet ﷺ and the Muslims prayed one prayer before sunrise and one before sunset.

Mujahid said: And pray by the order of your Lord بالعشي والإبكار “…In the evening and the morning” [Ghafir: 55]

Fourth: The above is an explanation to what we wrote in the book “Islamic State” pages 12-13 (Arabic version) and this is the text:

“He ﷺ was calling people to Islam in Makkah openly following the orders of Allah سبحانه وتعالى, Allah سبحانه وتعالى says: يَا أَيُّهَا الْمُدَّثِّرُ * قُمْ فَأَنْذِرْ “O you who covers himself [with a garment]. Arise and warn” [Al-Muddathir: 1-2]

He contacted people and presented the Deen to them and He ﷺ structured them around him secretly on the basis of this Deen, and when the companions of the Messenger ﷺ wanted to pray, they would go to the wooded area and hide (when praying) from their people…”

I hope that this issue is clarified, by the permission of Allah.