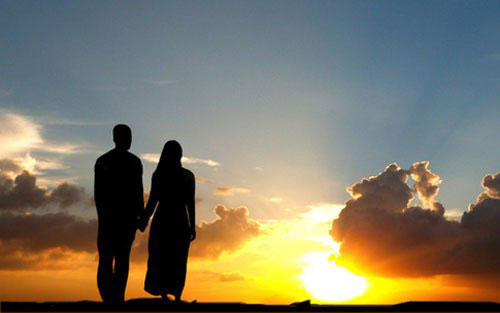 Our Ameer, May Allah protect you.

1- We have explained this and in its details in the Social System in Islam book:

The first condition is the occurrence of the offer and acceptance in the same sitting, where the sitting in which the offer was given is the same sitting in which the acceptance took place. This is if the two contracting parties are present together. If the two parties are in two different countries and one of them writes a letter to the other with an offer of marriage and the recipient of the letter accepts, then the marriage has been contracted. However, in such a situation, it is stipulated that she reads or lets someone read the letter out to two witnesses who are made to hear its wording. Or she should say to them so-and-so person has sent me a letter in which he has proposed to me and calls upon them in the same sitting to bear witness that she has given herself in marriage to him.

The second condition for the contracting of marriage is that each of the two contracting parties should hear the statement of the other and understand it to mean that he wants to contract the marriage with this statement. If he did not know, either because he did not hear or did not understand, the marriage will not be valid. For example, if a man dictated to a woman the meaning of ‘I have married you to myself‟ in French whilst she did not understand the language, and she repeated the expression without knowing that the purpose of what she said was the contract of marriage, and the man subsequently accepted it, then the marriage will not be valid. If, however, she knew that the purpose of what she had said was a contract of marriage, then the marriage would be valid.

The third condition is that the acceptance should not object to the offer, whether the objection is to the whole offer or part of it.

The first condition is that the woman should be suitable for the contract of marriage. “Like not marrying two sisters at the same time”.

The second condition is that the marriage will not be correct without a guardian (wali) since the woman does not possess the right to give herself or give others in marriage. Similarly, she does not have the right to delegate anyone other than her guardian to give her in marriage. If she does this, the marriage will not be correct.

2- We need to understand the difference between Fasid (improper) and Batil (void). Batil (void) is what contradicts the Shariah rule in origin, i.e. it is prohibited, or that the contract lacks a required condition that its absence violates origin of the action (i.e., marriage in this case). Fasid (improper) is in agreement with the Shariah rule in origin; however, its attributes that do not violate the origin is what contradicts the Shariah.

Fasid (contracts) are not found in the acts of worship; but Batil is found because the person who follows the conditions and elements finds them all related to the origin (of the rule). Rather, Fasid contracts can be present in the transactions. In the contracts, for example selling what is impregnated, which is in the stomachs of animals, is Batil from the basis because it is prohibited in origin, unlike someone who sells the one who is unaware of the price, like someone from the country side, it is a fasid sale; for ignorance of the price, and when he is in the market he will be given a choice; he can proceed with the sale or cancel it. In the example of shares in companies, they are Batil in origin because they don’t  have the Badan (physical effort) partner; they are free from a condition related to the original (rule), but if the partners participate in accordance with the conditions of the Shariah, but one of the partners insists that he gets an amount as a condition, the contract of the company is Fasid because it involves Garar (unknown element) in the attribute (detail) and not in the original (rule) because the partner has a proportion of the profit and not a certain amount; the company may lose. If they agreed on the percentage of profit, the contract will not be fasid any longer, and it will be a correct contract.

Thus, there is no difference between Batil and Fasid in the acts of worship. Act of worship could be either valid (removing a sin) or invalid (not involving removing the duty). Prayer is either valid or invalid. However, in financial contracts that result in corresponding obligations or transfers of ownership, such as contracts of sale, leasing, transfer, companies and the like.

As for marriage, Batil and Fasid contracts are both contrary to Shariah, but the Batil contract is annulled from the basis and is separate from its effects. If intercourse occurs, it takes the rule of the zina (adultery), and the child is not associated with the man who did zina; there will be no laws of Idda, nor the entitlement to dowry, nor women prohibited by marriage: It is Batil in origin. As for the Fasid contract, its violation of Shariah is in the conditions of validity and not in the conditions of the contract. Therefore, despite the sin that was inflicted on the two contracting parties, it has consequences if there was intercourse but if there wasn’t intercourse, there wouldn’t be any consequences. The consequences of fasid contracts that has intercourse include:

In this Hadith the Prophet ﷺ entitled the dowry to the woman who is married through a Fasid Nikah (i.e. without the permission of her wali (guardian)) on the condition that the marriage is consummated because the Prophet linked the dowry to the consummation (i.e., intercourse): «فَإِنْ دَخَلَ بِهَا فَلَهَا الْمَهْرُ بِمَا اسْتَحَلَّ مِنْ فَرْجِهَا» “If he (husband) consummates with her, she is entitled to the dowry due to his making permissible her private parts.”

There are other effects of the fasid marriage if there is consummation. But these entail details and differences in the school of thoughts, such as Iddah, lineage, inheritance and the prohibition of marriage (to certain women). Whoever wishes to learn more, they can go back and refer to the relevant references.

Allah is Most Knowledgeable and Most Wise