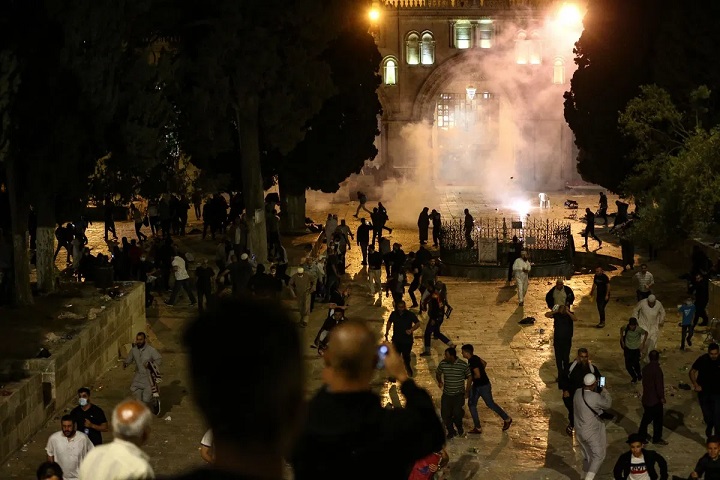 Evers since the last days of Ramadan when many across the world watched in horror as Zionist forces stormed al-Aqsa compound and Zionist settlers tried to evict residents in Sheikh Jarrah, matters have now escalated into a full-blown crisis as the Jewish entity is now invading Gaza. When the Zionists were committing their crimes, much of the global media gave it little attention and only begun covering the issue when rocket strikes started. The pro-Zionist West and its supporters in the media have begun their Information war to deflect people’s attention form their real crimes. At the heart of the current crisis is the neighbourhood of Sheikh Jarrah in East Jerusalem.

Since 2009, Zionist settler organisations have been working on their stated aim of evicting and expelling all Palestinians from Sheikh Jarrah. The neighbourhood has seen settlers storming homes and expelling the residents and then taking the properties for themselves. This has been the consistent policy of this Zionist regime across occupied Palestine as it supports settler groups in stealing lands from Palestinians who have been living in places such as Sheikh Jarrah for decades. Palestinians have no rights according to the ‘Israeli’ judicial system. Under the international law, Sheikh Jarrah and East Jerusalem belongs to the Palestinian territories. But the Zionists continue to illegally occupy it since the 1967 War.

Like many residents in occupied Palestine, Sheikh Jarrah residents resorted to the legal system for protection but ‘Israeli’ courts have consistently upheld the view of Zionist supremacy. The supreme court has a track record of supporting Zionist settlers. Zionist settlers have already stolen homes in Sheikh Jarrah amongst other areas with an effective apartheid system. The residents of Sheikh Jarrah resorted to peaceful protests with many people joining them in support of the families that were to be evicted. These were non-violent protests that consisted of chants and as it was the month of Ramadan, protestors broke their fast together and prayed together. Zionist settlers, seeing the sight of hundreds of protesters outside their recently stolen properties, turned to the ‘Israeli’ police to protect their claims. Then the police began spraying Skunk water on the protestors, which is a chemically enhanced sewage water. Videos have been posted all over social media of the police using violence on random civilians and breaking into homes in Sheikh Jarrah and arresting people.

Then, during the last 10 days of Ramadan, Zionist forces with heavy weapons barged their way into al-Aqsa when worshippers were praying. They then proceeded in using stun grenades and started shooting rubberised steel bullets. They even forced the doors shut so no one could escape. This caused countless injuries especially to their eyes and heads.

Sheikh Jarrah, like much of historic Palestine, is occupied territory and the Jewish entity is forcing the Palestinians to leave so Zionist settlers can move in. This was why protests have swelled to defend Sheikh Jarrah and to protect people who are going to be expelled from their homes. The Zionist regime responded as it has always done by attacking al-Aqsa. Al Aqsa was attacked by the Zionist police due to the protests taking place in Sheikh Jarrah.

Much of the global media only began giving coverage to this issue when the Jewish entity came under attack. This is no conflict or clash between relatively equal powers. Palestinian weapon of choice against a fully militarised police force are rocks and stones. But these images have seen public opinion growing against the surrounding Muslim rulers and militaries to intervene on behalf of the Muslims. These rulers are stuck between pleasing the West and maintaining normalisation with the Jewish entity. After decades of calling for UN resolutions and international help, the ummah now wants the Muslim armies to liberate Palestine.