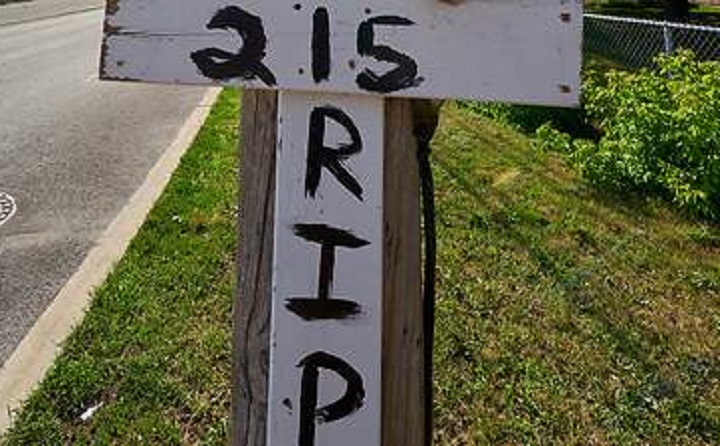 Canadian protesters have torn down and defaced statues of Queen Victoria and Elizabeth II in anger over the historical treatment of indigenous people. Demonstrators gathered in Winnipeg, Manitoba to highlight abuses under Canada’s residential schools system, which saw at least 150,000 indigenous children forced away from their families to assimilate them into Canadian society.

Outrage over the system, which ran from the 19th century until the 1990s, has been fuelled by recent discoveries of hundreds of unmarked graves at the grounds of the schools. Thursday marked Canada Day, which has traditionally been a celebration of the country’s independence from British rule in 1867.

Comment:
Winston Churchill stated, “I do not agree that the dog in a manger has the final right to the manger even though he may have lain there for a very long time. I do not admit that right. I do not admit for instance, that a great wrong has been done to the Red Indians of America or the black people of Australia. I do not admit that a wrong has been done to these people by the fact that a stronger race, a higher-grade race, a more worldly wise race to put it that way, has come in and taken their place.” [Winston Churchill to the Peel Commission (1937) on a Jewish Homeland in Palestine. – The 1930s]

In the 21st century, the attitude of the elite, ruling class in Britain hasn’t changed.

“The (African) continent may be a blot, but it is not a blot upon our conscience,… The problem is not that we were once in charge, but that we are not in charge any more.” [Boris Johnson, The Spectator, 2002]

“To any non-Muslim reader of the Koran, Islamophobia – fear of Islam – seems a natural reaction, and, indeed, exactly what that text is intended to provoke,… Judged purely on its scripture – to say nothing of what is preached in the mosques – it is the most viciously sectarian of all religions in its heartlessness towards unbelievers.” [Boris Johnson, The Spectator, 2005]

Western civilisation’s values and humanity are killing us with their superior hypocrisy and technologies of death and destruction. While their faithless puppet leaders, extinguish the sincere amongst the Ummah in our lands.

The response of Western civilisation elites is not a sincere admission, reflection and learning of the evils they visited in the past. Instead they deflect, detract and manufacture ‘cultural-wars’, label and demean the rising anger, with ‘anti-woke’ propaganda.

Liberal Capitalism talks a good talk about humanity, enlightened principles and equality of humankind, but the West’s ugly grab for Covid-19 vaccines has reminded the rest of the world that, at the core of Western civilisation, is a self-serving corruption that is the same as the barbaric colonialists of yore.

The governments and elites of the West, have manipulated truth and lied to their people for so long and so much, they no longer understand the value of Truth. A sizeable proportion are either confused, immune to facts or worse, actively manufacture and propagate lies. Lies and falsehood in society have crippled even the powerful USA.

Islam liberates, it does not colonise. Islam vanquished the worship of the elite “2%”, and their self-serving administrations, and replaced it with the justice and unique civilisation of Islam.

The peoples Islam liberated and bonded, still cling to the Shari’ah. From As-Shams to Palestine, to Afghanistan, Kashmir, Africa and South East Asia, Muslims across the world are calling for Islam.

In stark contrast, the former and neocolonialists and their ‘values’ are as hated today as in the past. Indeed the West has to actively intervene directly or indirectly via their puppets to suppress and impede the Ummah’s sincere actions to live by Islam.

Allah Subhanahu wa Ta’ala has informed us of these people,

“Whenever they are told: “Do not spread mischief on earth,” they say: “Why! We indeed are the ones who set things right. They are the mischief makers (mufsiduun), but they do not realize it.” [Al Baqarah: 11-12]

Despite the political pressures, ideological trickery, brutality and hatred of Islam pushed by the West, the Ummah know that only Islam brings a true liberation, justice and security to all peoples of earth. Only Islam will protect us from the ravages of the actual barbarians, the neocolonialists, the mufsiduun of the world.