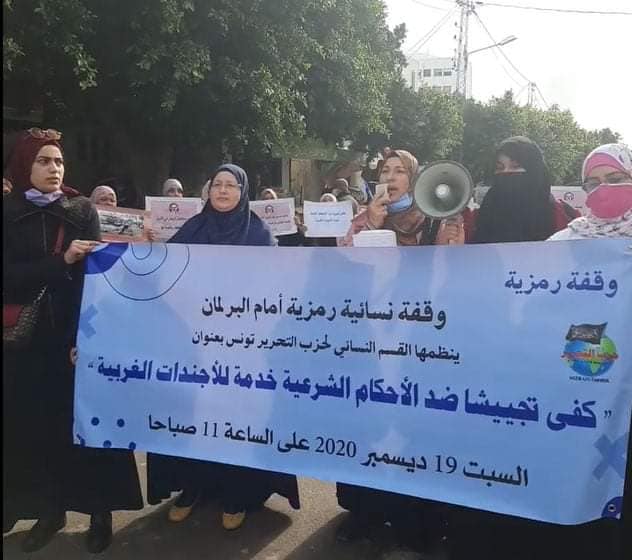 Organized a Protest: “Stop the Incitement Against Shariah Rulings to Serve Foreign Agendas”

Within the framework of the campaign “The Muslim Family is Fortified and Does Not Need Agreements Claiming Goodness that Wreak Havoc” carried out by the Women’s Section of Hizb ut Tahrir / Wilayah Tunisia in order to counter the country’s accession to the so-called Istanbul Agreement and the impact of recent events in Parliament following a very ordinary intervention by Deputy Muhammad al-Afas in which he mentioned some of the rulings of Islam in the field of the family when addressing the speech to the Minister of Women, the situation has been tensed up to insults, violence and the subsequent inciting speeches on Islam by those who call themselves the people’s representatives, and the people are innocent of them.

And following the stands of suspicious feminist organizations, agent and traitorous parties, and gay associations before the House of Representatives against the background of the aforementioned intervention entitled Anti-violence, and the content of rejecting the provisions of Islam related to women and the family and incitement against them and presenting them as backward and devoted to violence against women, and after the proxy media councils and platforms were opened for them, the Women’s Section of Hizb ut Tahrir / Wilayah Tunisia organized on 4 Jumada al-Awwal 1442 AH corresponding to 19 December 2020 CE, a stand during which the Shaabaat (women members) raised slogans indicating the Muslim woman’s adherence to her religion and that she believes that in the rulings of her Lord is her paradise and that she rejects the provisions of secularism and human legislation which she considers the cause of the misery they live today.

The stand ended with a speech by the spokesperson for the Women’s Section of Hizb ut Tahrir / Wilayah Tunisia, Ustadha Hanan al-Khamiri, following which the Shaabaat (women members) called out slogans condemning the secular regimes and their legislation. 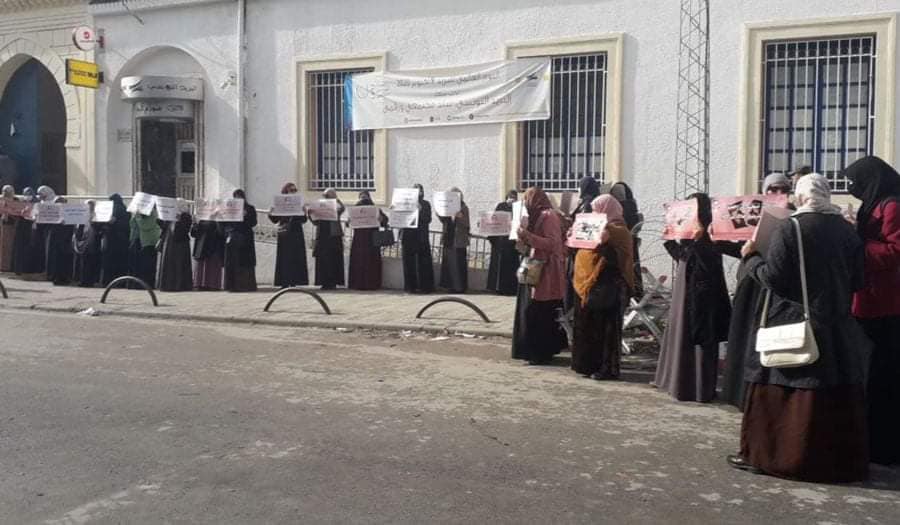 Al-Khamiri’s speech was summed up in the statement that the secular deputies who considered themselves as legislators expressing the will of the Ummah are in fact traitors, mercenaries and dishonest witnesses serving the colonial agendas hostile to the Ummah and its Islam, and that the recent events in Parliament revealed their truth, lifted their masks, and removed their false cover about freedoms, women’s rights and poisoned equality, showing to all that they had no message but to drag women into immorality and establish a society of perversion, and that they are entrusted with the task of eliminating Islam.

In her speech, al-Khamiri explained how the women of the entire Ummah reject what is offered to them of the plots of man-made laws, that they are aware of the poison in it and they adhere to the rulings of their Lord, and that there is no legislator other than Allah and no legislation other than the legislation of Islam, and that they in the Women’s Section of Hizb ut Tahrir / Wilayah Tunisia are working hard alongside their brothers for the sake of resuming the Islamic way of life by establishing the second Khilafah Rashidah (rightly guided Caliphate) on the method of Prophethood.

“And to Allah belongs [all] honor, and to His Messenger, and to the believers, but the hypocrites do not know.” [Al-Munafiqun: 8].