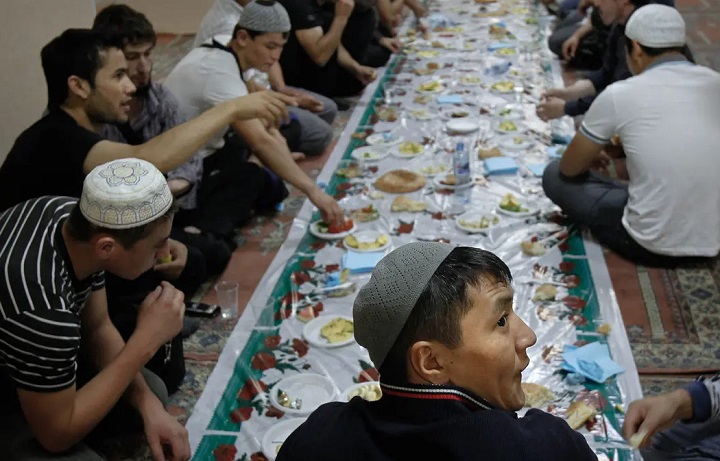 The month of Ramadan is a month of repentance for many, but not for President of Tajikistan Emomali Rahmon. On the eve of the onset of the holy month, he delivered an annual message to the people, in which he once again called on some categories of Tajiks to abandon their compulsory fasting.

“According to the ulema, Shariah and theologians of Holy Islam, fasting makes it difficult for people who work in difficult conditions or are employed in heavy industry and manufacturing, whose profession is related to ensuring food security. In this regard, they are allowed not to fast, they can observe Muslim fast at another favorable time for them,” said Rahmon, while, as usual, without specifying the names of scientists who would have allowed not to fast on Ramadan.

Requesting not to fast has become a tradition for Rahmon; for several years in a row, with the onset of the holy month, he has been telling fictional fatwas, trying to dissuade some people from compulsory fasting.

For the first time, Rahmon said this at a meeting with representatives of the public, which took place on May 12, 2018. Then he said that the dehkans and builders of the Rogun HPP may not fast. “Nobody believed that the Tajiks themselves would be able to build the Rogun hydroelectric power station. Therefore, builders may not observe fasting in the month of Ramadan, so that construction would not be delayed for a year,” Emomali Rahmon said then.

Immediately after this speech by Rahmon, the chief mufti of Tajikistan went to the construction site of the Rogun hydroelectric power station in order to confirm the president’s words and issue a fatwa in support of Rahmon’s statement. “The builders of Rogun may not observe fasting in the month of Ramadan, but they can do it later, at the most appropriate time,” Saidmukarram Abdulkodirzoda said. In addition to the chief mufti, the same opinion was voiced by some government imam-khatibs.

Also, the people of Tajikistan traditionally ignored Rahmon’s recommendations and categorically rejected his fatwas, including agricultural workers. “We are Muslims, under no circumstances we will leave the obligatory fasting this month, because it is obligatory for Muslims. We will adjust the work schedule, but we will not leave the fast,” they told reporters.

In addition, on April 21 of this year, the head of the Committee on Religious Affairs and Streamlining of Traditions, Sulaimon Davlatzoda, submitted the amendments to the parliament to the law on streamlining traditions and rituals. In a conversation with reporters, he stressed that iftars should be held exclusively with the family, arguing that the authorities should prohibit iftar holding outside the family at the legislative level. “Nobody forbids anyone to receive guests, any event can be held based on the situation and conditions… Iftar should be held with the family,” he said.

Recall that the month of Ramadan, for the residents of Tajikistan, is an important month of the year; this month, by tradition, many arrange iftar and invite relatives and friends to visit. In many cities, in restaurants and cafes, conditions for holding iftar are also created. All these actions of the Rahmon regime are nothing more than another attempt to create another obstacle to the practicing of Islam by the people. Thus, the authorities want to reduce the level of religiosity in the country. Allah Almighty said:

“The month of Ramadan [is that] in which was revealed the Quran, a guidance for the people and clear proofs of guidance and criterion. So whoever sights [the crescent of] the month, let him fast it; and whoever is ill or on a journey – then an equal number of other days. Allah intends for you ease and does not intend for you hardship and [wants] for you to complete the period and to glorify Allah for that [to] which He has guided you; and perhaps you will be grateful.” [2:185].