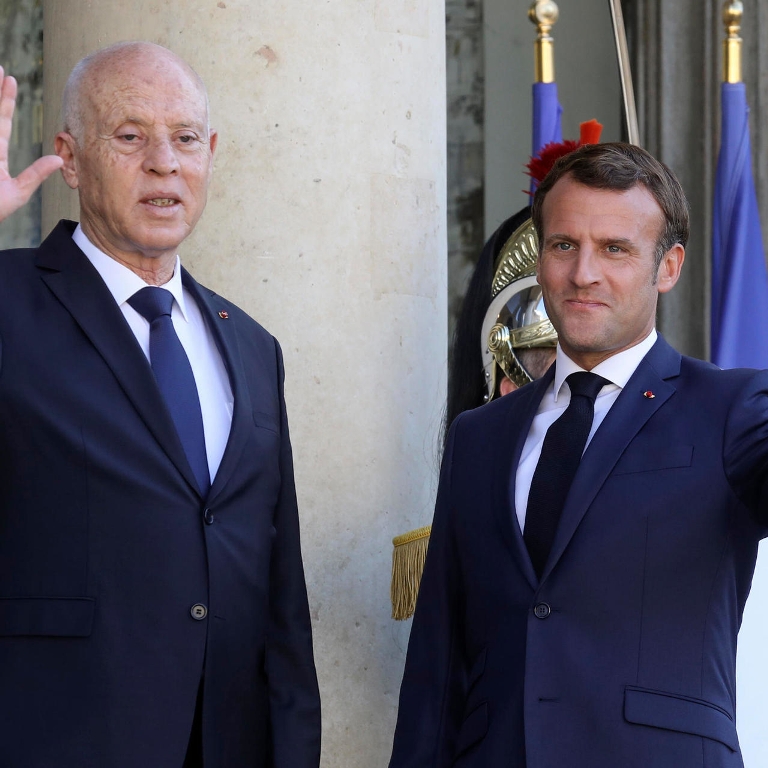 At a time when France is waging a fierce campaign against Muslims and against their Prophet and their religion, President Qais Saeed received, on Thursday 22 October 2020, at the Carthage Palace, the French Minister for Europe and Foreign Affairs, Jean-Yves Le Drian, without saying a word about President Macron’s offense to Islam, without denouncing the campaign of mocking the Prophet of Guidance Muhammad ﷺ, and without condemning the repeated attacks on Muslims in France and restrictions on their practice of their religion and rituals!

The president was not satisfied with his failure to support our Prophet Muhammad and the victory of Islam and Muslims, but he launched a severe assault on the Chechen Muslim youth who angered for his Prophet ﷺ and described his work as a ‘terrorist‘! And he demanded the necessity of strengthening cooperation with France to combat terrorism and extremism, so he made France the spiteful enemy that mocked our Prophet ﷺ, colonized our country, ravaged our people, raped our women and plundered our wealth, he made it a victim so that it must cooperate with it against (terrorists) Muslims!!! We wonder why President Qais Saeed, during his visit to Paris on 22nd June last year, did not visit the Museum of Human Skulls (the Museum of Mankind!), in which malevolent France displays the heads of the Muslims who were killed and beheaded at the time of the hateful occupation, in order to realize the French terrorism in its origins?! Did he not hear of the millions of martyrs killed by the Crusader France in beloved Algeria?! Does he not see France’s crimes in Mali and its conspiracy against our people in Libya?! فَإِنَّهَا لَا تَعْمَى الْأَبْصَارُ وَلَكِن تَعْمَى الْقُلُوبُ الَّتِي فِي الصُّدُورِ “For indeed, it is not eyes that are blinded, but blinded are the hearts which are within the breasts”. [Al-Hajj: 46]

Thus, Qais who whitened the page of the French colonialism in Tunisia and described it as a guarding covenant can never support his Deen, his Prophet ﷺ and his Ummah.

This French minister would not have trodden our country after his president vilified our religion, our country and our revolution except from the failure of our rulers, and the immoral and humiliating people of France would not have mocked our Prophet ﷺ and dare to our religion if the Muslims had a caliph, and it would suffice to remind what happened in 1890 when the French writer Marc de Paris wrote a scene of a play presented on the stage of the Francis Comedy Theater, in which there is an insult to the Messenger of Allah Muhammad ﷺ, then Caliph Abdul Hamid II, may Allah have mercy on him, prevented it from being shown by simply a threatening message that he sent to France, which complied in a debased way, and we ask Allah (swt) to honor us with the establishment of the second Khilafah Rashidah (rightly-guided caliphate) on the method of Prophethood so that we cause France to forget the whispers of the Satan.

Allah (swt) says: إِنَّ الَّذِينَ يُؤْذُونَ اللَّهَ وَرَسُولَهُ لَعَنَهُمُ اللَّهُ فِي الدُّنْيَا وَالْآخِرَةِ وَأَعَدَّ لَهُمْ عَذَاباً مُّهِيناً “Indeed, those who abuse Allah and His Messenger – Allah has cursed them in this world and the Hereafter and prepared for them a humiliating punishment.” [Al-Ahzab: 57].