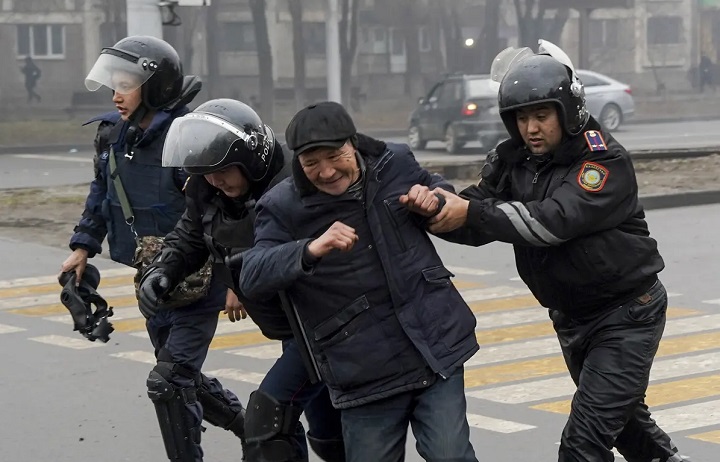 On January 7, the President of Kazakhstan, KZh Tokayev, made another statement: “The anti-terrorist operation continues in our country. The large-scale and well-coordinated work is being carried out by the police, the National Guard and the army to restore law and order in accordance with the Constitution.

Yesterday the situation in the cities of Almaty, Aktobe and Almaty region stabilized. The introduction of the state of emergency is yielding results. Constitutional legality is being restored throughout the country. But terrorists continue to damage state and private property and use weapons against citizens. I gave the order to law enforcement agencies and the army to open fire to kill without warning…”.

Comment:
Another increase in prices for liquefied gas in the country from January 1, 2022, overwhelmed the thicket of the patience of the people. On January 2, people dissatisfied with the rise in prices went to a protest rally in one city. The next day, residents of other cities also supported the protesters. Representatives of local authorities announced their refusal to reduce the gas price and began to passively disperse the protesters. But this only added fuel to the fire, and spontaneous protest rallies spread throughout Kazakhstan.

On the third day, January 4, the government made concessions to the protesters, albeit with some tricks, but still promised to reduce the gas price. But the protesters were not satisfied with the promises, and began to demand the resignation of the government and shouted: “Go away, old man!” “The old man” is the first president of the country N. Nazarbayev.

On January 5, KZh Tokayev announced that he had removed N. Nazarbayev from the post of the Security Council of Kazakhstan, took his place himself and dissolved the government. N. Nazarbayev has not yet reacted in any way to the statements of KZh Tokayev, and has remained completely silent since the beginning of the rallies. Obviously, against the background of the absence of N. Nazarbayev, KZh Tokayev decided to take control of the whole country, but that was not the case. The people did not calm down and continued the rallies demanding the withdrawal of the KZh Tokayev himself.

While KZh Tokayev was pondering how to become the sole ruler under the guise of the protesters, representatives of the opposition in the West joined the protesters. The oppositionists declare peaceful protests, control the people in the streets, and that none of the protesters are participating in the pogroms and shooting at the authorities. Oppositionists provide video material refuting some statements of KZh Tokayev about the shootings of the police, or the fact that the protesters went home and no one was left on the streets. The opposition also claims that arson and provocations come from the hands of the National Security Committee special services themselves.
In turn, KZh Tokayev, as expected, said that he was not going to leave his post, and the protesters were terrorists, attacking the police, causing riots in cities, shooting and killing.

Russian media, Putin and the CSTO joined in here. The Russian media were full of headlines about terrorists among the protesters, found an Islamic trail of militants, etc. KZh Tokayev turned to Putin for help and support from the CSTO. Putin did not hesitate to send troops to Kazakhstan, supporting the idea of fighting terrorists.

So we observe how the criminal power in Kazakhstan is maintained at the expense of the criminal regime of the Kremlin. KZh Tokayev is ready to shoot his people, who went to peaceful rallies demanding the resignation of the government. The CSTO is the Kremlin’s tool to keep the criminal regimes in power, and thereby maintain its influence in these republics, replacing one tyrant with another.

We can draw conclusions from the events taking place.

First: the power is in the hands of the people. The people themselves give the reins of government to whomever they wish. And if the people want, they can remove any tyrant. Second: today Muslims are in lack of political awareness. Due to a misunderstanding of politics, Muslims have given the reins of power to tyrants and colonialists, which is why they suffer in the abyss of economic, political, social and other problems.

In turn, I pray to Allah that these rallies in Kazakhstan become the beginning of the awakening of the political consciousness of Muslims in Kazakhstan, throughout Central Asia and the whole world, which will ultimately help in the work of reviving the Second Righteous State of the Khilafah (Caliphate). And may Allah help us.