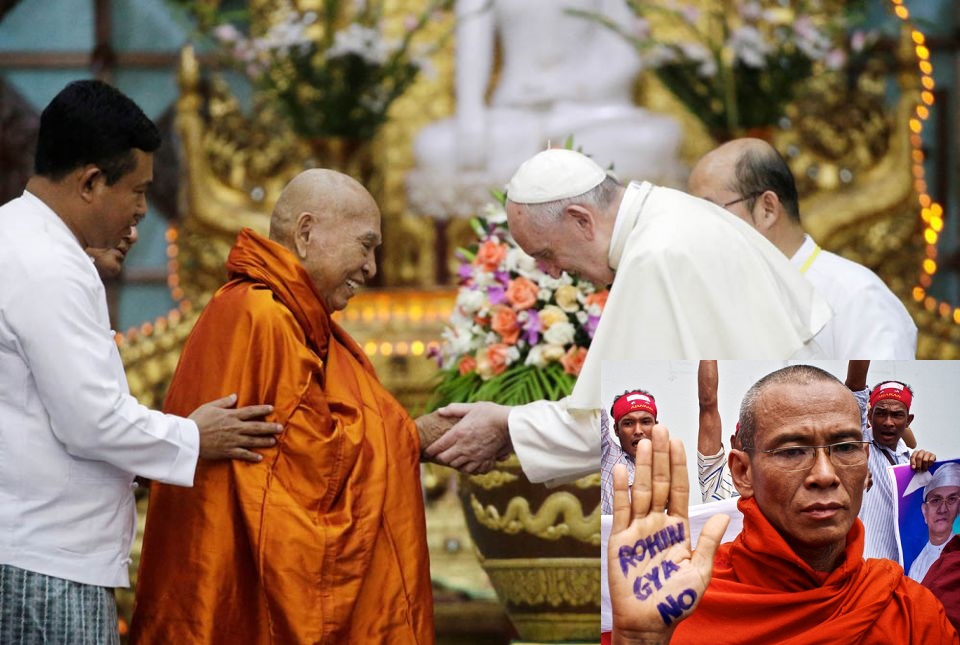 On 28th November 2017, the leader of the world’s 1.2 billion Catholics, Pope Francis delivered an open-air mass to more than 150,000 Catholics in Yangon in his much-hyped visit to Myanmar. It has been highly assumed that his visit would focus international attention on the plight of the stateless Rohingya who have been persecuted systematically by the Myanmar military. But, it came as no surprise to us when we found that the hypocritical pontiff shamelessly avoided any public mention of the Rohingya Muslims. Neither had he used the term ‘Rohingya’ in his speech in a bid to please the Buddhist bigots, nor did he mention anything about the cold-hearted massacre of the butcher Burmese military. And, he not only lost his pretentious moral high ground which he had tried to claim previously by referring to the Rohingyas as “our Rohingya brothers and sisters”, but also his two-facedness got exposed this time when he met the commander responsible for the crackdown, Gen. Min Aung Hlaing, whose hand is still wet with the blood of the Muslims, without mentioning anything about his military’s massacre. He also met one of the most bigoted monk of Myanmar, Sitagu Sayadaw, who always supports Myanmar’s government and military in the face of international accusations of ethnic cleansing against the Rohingya. Moreover, Pope’s profane hypocrisy did not end there; he, instead of criticizing Suu Kyi, has unashamedly expressed support for her efforts to bring about reconciliation among different groups after decades of military dictatorship!! All in all, the Pope’s visit, meetings and speeches were all reflective of the typical deceptive character of the western colonialists and their stooges.

Fact of the matter is that, like Donald Trump, Pope Francis represents an ideology, i.e. secular capitalism, which has been historically fearful about political Islam, especially since the famous siege of Constantinople in 1453 by Sultan Muhammad Al-Fateh who gave the death blow to Byzantium, the last vestige of the Eastern Roman empire. Since then, the fear of being conquered by Islam is deeply ingrained in all the western institutions. Thus, time and again we saw same deceitful stance from earlier Popes like Benedict XVI, the immediate predecessor of Francis, who on one hand claimed to work for bringing unity among Christians and Muslims, but spewed hateful idea about the apex of Islam – Jihad – by labeling it as violent and portraying to be equivalent to terrorism. In today’s world, one side of the coin of western colonialism is Donald Trump and the other is Pope Francis. The only difference is that Francis is capable of veiling his ugly, irrational and historical hatred and fear about being seized and conquered by Islam once again by his sweet talks.

Therefore, Pope Francis’s 3-days long visit to Bangladesh on 30th November and his meeting with some Rohingya refugees were nothing but a part of Western strategy to exploit religious sentiments of Bangladeshi Muslims. One of his key objectives of visit was his cunning call of ‘interfaith dialogue’ – a modern western-construct to fuse Islam, Christianity, and Judaism into one Abrahamic religion with the objective of obscuring the reality of the ideological struggle between Islam and Kufr. This is the wicked agenda of the Pope to further the Western hegemonic interest in the Muslims lands amid the war against Islam by the West. On one hand, the Western Kuffar and their regional allies are carrying on massacre on the Muslims in their lands, and on the other hand their secularly religious stooges like Francis are trying to diffuse ‘inter-faith ideas’ into the minds of Islamic Ummah to neutralize her and/or compel her to abandon her role in carrying Islam’s challenge to all other religions and ideologies. Allah Azza Wa Jal has already exposed Pope Francis’s deceitfulness in Myanmar and no matter how hard he tries to deceive the Muslims, the revival of the second Righteous Khilafah (Caliphate) on the way of the Prophet (saw) can never be prevented:

“They desire to put out the Light of Allah with their mouths, but Allah rejects and He insists that His Light prevails even if the Kuffar detest it. It is He Who has sent His Messenger with the Guidance and the Deen of Truth to make it prevail over all other ways, even if the idolaters detest it.”