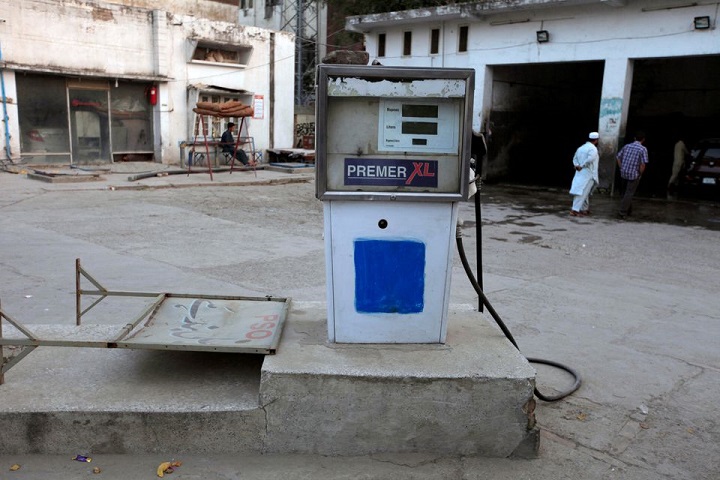 In the span of just one week, upon the dictation of the IMF, the government of Pakistan increased the petrol and diesel prices by PKR 60. So petrol shot up from PKR 150 to PKR 210! Yet again, the imported system sets a new record. The previous record set by the visionless PTI government has been broken by the current visionless PML-N government, increasing the prices by PKR 60!

When PTI increased the petrol prices during their term in office upon IMF dictation, the opposition alliance, the PDM which included the PML-N, spoke against it. Cursing the PTI government, the opposition went on to organize an entire march, the “Mehngai Mukao March (Abolish Inflation March)” demanding an end to high petrol prices and back breaking inflation. They gathered people on the streets with mere slogans, but with no solutions to the high petrol prices whatsoever.

Now that PML-N is in office, PML-N too, upon IMF dictation, has increased petrol prices, due to which the common man suffers. Today, PTI, that is now in the opposition, is speaking out against them. It is indeed PTI that is cursing the government today. However, they are also doing so, without any solution to the issue either.

This is so because no matter who the leader is, if we are a part of the current capitalist world order, there exists no solution to the issue of backbreaking petrol prices. None of these so-called leaders have the vision to bring the Muslims of Pakistan out of this misery. They are all committed to capitalism and cannot see outside of it.

Erroneously, capitalism asserts that each and every economic resource, including public utilities, such as petrol, must be privatized. Privatization results in the private owners milking huge profits at the expense of the public, with soaring petrol prices. However, economic equity necessitates differentiation in types of ownership, to distribute wealth and prevent its concentration. Guardianship of the public, as a sharing community, mandates a distinct type of ownership for public utilities, such as minerals, water, feeding pastures and energy. The divinely revealed Islam alone has the Shariah legal ruling of ‘public property,’ uniquely applied upon public utilities. The Khilafah (caliph) must spend the wealth and revenues of public utilities on the needs of the public alone, whilst preventing their privatization, making costs affordable. The Messenger of Allah (saw) said,

“The Muslims are partners in three things, waters, feeding pastures and fire.” (Ahmad)

So, the discussion is no more about who the leader is. Now is the time to discuss the real issue, that is the system itself. It is the current imported system that forces us to surrender our economy to the IMF. It is the system due to which the common man suffers and any leader that talks about relief in the current system is giving the people a false hope.

What must be realized today is that there exists a political vacuum in Pakistan, where on one hand you have PML-N, and on the other you have PTI, both of whom are incompetent, visionless, incapable of solving the issues of the Muslims of Pakistan and subservient to the IMF and the US.

Just, looking at just the issue of petrol prices, we realize that none of the players in the current political system have a solution to the issue, and this is the case with every issue faced by the Muslims of Pakistan today.

This political vacuum must be filled by the political system of Islam, that gives us a vision to build an independent economy, by implementing the Islamic economic policies, ultimately implementing an Islamic world order that challenges the Western capitalist world order, due to which the Muslims of Pakistan are suffering today.

The Dawah Carriers who care for the Ummah must realize that this is a crucial time for Pakistan and that the sons of the Muslim Ummah must step up. At a time when none of the political players have a solution to the issues faced by the Muslim Ummah, it is the responsibility of the Dawah Carriers to explain the Islamic solutions to the people of Pakistan and the people of power in Pakistan.

O Dawah Carriers, you have the capability of becoming the next Musaab ibn Umayr (ra). This is not the time to sit quietly. Instead, this is the time to end the misery of the Muslims of Pakistan by establishing Khilafah (Caliphate) upon the Method of Prophethood.

As for you, O people of power in Pakistan, you must realize that if Pakistan continues to follow IMF dictation, as it is doing today, we are going to end up worse than Sri Lanka. Now is the time for you to be like the Ansaar and provide Nussrah for the implementation of the Khilafah in Pakistan, so that the misery of the Muslim Ummah can come to an end and the glad tidings of RasulAllah (saw) can be fulfilled. RasulAllah (saw) said,

“…And then there will be Khilafah upon the Prophetic method…” (Ahmed)