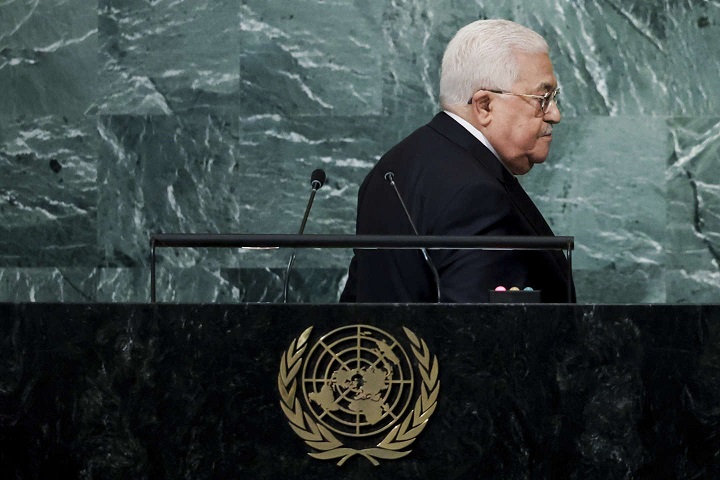 On 23 September 2022, Mahmoud Abbas, president of the Palestinian Authority reiterated his appeal for the State of Palestine to become a full-fledged member of the UN, and warned of waning peace prospects with Israel, in his speech to the General Assembly on Friday. [UN News]

Israel “is, through its premeditated and deliberate policies, destroying the two-state solution,” the Palestinian Authority president said in a speech to the UN General Assembly. “This proves unequivocally that Israel does not believe in peace,” he added. “Therefore, we no longer have an Israeli partner to whom we can talk.”

Abbas, 87, said Israel has been engaged in a campaign of land confiscation in the occupied territories and was giving the military “total freedom” to kill or otherwise use excessive force against Palestinians. “This is the truth: they are an apartheid regime,” he said. [English Al-Arabiya]

Comment:
That is the sad pathetic representation of the Palestinian state president, without any shame or dignity he utters, “Therefore, we no longer have an Israeli partner to whom we can talk.”

How can the zionist entity ever be depicted as a partner?!?! Only to those who are acclimated to being humiliated before the world especially before his own people, yet he speaks only on his behalf. Partner in what exactly?! Killing? Pursuit? Harassment? Oppression of the people of Palestine?

Like a beggar that keeps begging for a morsel knowing full well he will be rejected harshly yet Abbas knows no meaning in self-dignity – worse he pushes the boundaries by making his government submissive openly and covertly to the occupation state. The latest incident was in Nablus, the horrific scene of the PA security forces storming in to Nablus in the very style used by the Jewish entity’s’ forces (IDF).

Then in an emotional yet pathetic show before the UN, Abbas aired out his grievances only for the criminal state to tear his claims up by jewish entities Ambassador to the United Nations, Gilad Erdan, who described the speech delivered Friday by the Palestinian Authority president at the UN as “delusional, full of lies and out of touch with reality. Abu Mazen has proven once again that his time is over.” [I24News].

Here is the mentality of the “yes master” as demonstrated by Abbas and his entourage – they know full well that they are rejected openly yet submit themselves to the humiliation.

This is a stark contrast to the people of Palestine who have the self-dignity and inner and outer strength – as mentioned above when the PA replicated the show of “Israeli” tactic storming into Nablus – the brave Palestinians threw rocks at the PA Security Forces tanks who understand the collaboration with the Jewish entity is done at the expense of the Palestinians.

The PA paves the way for the Jewish criminals to assassinate and destroy the Palestinians – the PA has blood on its hands like the Jewish entity so perhaps that is the “partnership” when they carry out the logistics and coordination with the criminals to pursue the pure men and women of Palestine as well as providing them with informants.

So Abbas begging to the UN – the institution that fully recognizes and protects the criminal entity…pleading for peace from the hungry wolves – Abbas is the wolf as well but the Palestinians pay the price of being the vulnerable lambs.

Palestine will never be liberated by any foreign formed council or recognized with any sovereignty. Just the opposite, every agency especially the US and European countries will prop up the criminal entity turning every blind eye to the persistent and continuous crimes against humanity in Palestine.

The armies of the Muslims – the Islamic State in the form of the Khilafah Rashidah (rightly guided Caliphate) upon the method of the Prophethood will not spare any effort to liberate the people of Palestine and their lands. Unquestionably the Islamic State will never allow itself to be humiliated or compromised before any foreign Western formed committee to gain recognition; a leading state power that will be the one to decide whether another state is worth its time. The Islamic State will liberate the seized lands and return them to their rightful owners (who are displaced all throughout the world). Allah (swt) promises,

“Indeed, the ones who oppose Allah and His Messenger – those will be among the most humbled. (20) Allah has written, “I will surely overcome, I and My messengers.” Indeed, Allah is Powerful and Exalted in Might.” [Al-Mujadilah 20-21].

Verily Allah will grant the Muslims the victory and indeed that will be a force to be reckoned with when the sleeping giant awakens from its deep slumber. Thus creating a new world order forever eradicating the criminal Jewish occupation.