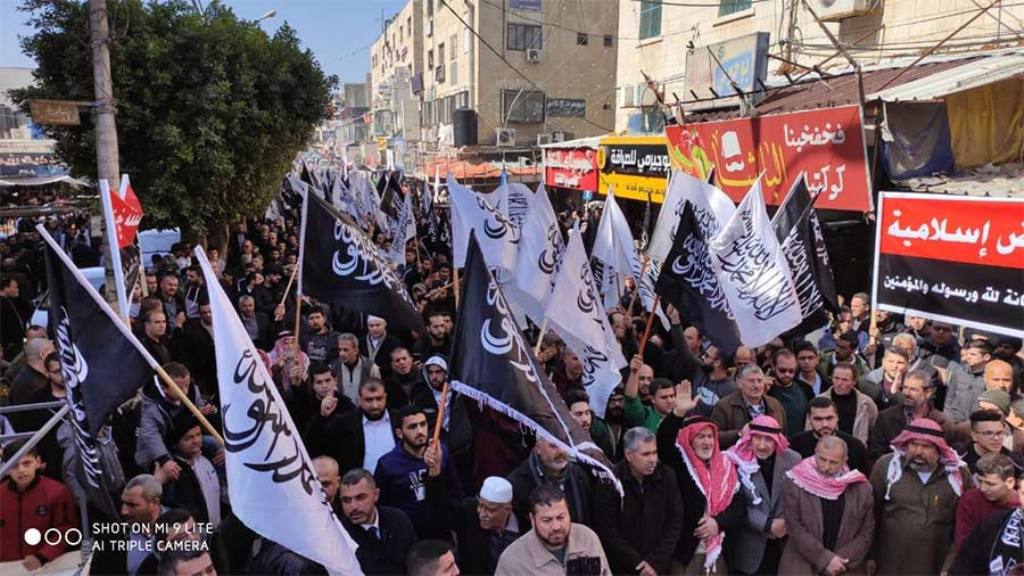 “And indeed, the wrongdoers are allies of one another; but Allah is the protector of the righteous.” [Al-Jathyia: 19]

On Saturday morning, 15 February 2020, the Palestinian Authority (PA) and its security apparatus erected barriers at the entrance to the city of Jenin, and took a number of measures to prevent a stand called by Hizb ut Tahrir to counter Trump’s colonial deal, … and as soon as the stand started, its individuals appeared in a state of agitation and hostility to suppress people in a shameful scene expressing the truth of these devices that were brought up by the American General Dayton, and the people shouting Allahu Akbar (Allah is Great), and yelled the truth seeking the victory of the Islamic Ummah and its armies to liberate the Blessed Land, and the voice of truth has raised rejecting the surrendering and treacherous solutions. So, what is it that enraged the PA and its devices to attack people in a barbaric manner, firing gas bombs and bullets, and hit with batons the banner of the Messenger of Allah ﷺ “La Ilaha illa Allah, Muhammad Rasul Allah”, and attacking the elderly and the ninety-year old great Sheikh?!

We ask the governor of Jenin, Akram al-Rajoub, the director of intelligence, Muhammad Ghannam, and the director of preventive Hijazi al-Jabari, what has angered you in the stand? Were you enraged by the volume of people’s Takbeerat (saying Allahu Akbar)… or by the banner of Rasulullah ﷺ?! Or the call on the Islamic Ummah and its armies to liberate the Blessed Land, or the rejection of the treacherous solutions that gave a Jewish entity 78% of the Blessed Land?! … Say what annoyed you?! Did Sheikh Taher, who is around ninety years old, who stood in front of your oppressors, shouting Allahu Akbar and cheering on Muslims, enraged you?! By Allah, who is no god but Him, this good does not enrage but the Jewish entity and the enemies of Islam … So, are you on their side?! … Respond: Are you on the side of the Jewish entity and the enemies of Islam?!

O the People in the Blessed Land:

The truth of the Palestinian Authority (PA) and its primary function was clearly expressed by the President of the PA at the last Arab Summit, and he said to the Jewish entity, “I am now able to protect… I am able to bring you a piece of information that you have never dreamed of bringing it”. He added, “We have 83 security protocols and agreements and we are ready to cooperate with any country that fights terrorism and we are following this policy and will not retreat from it!” And he stressed this in his speech at the Security Council and added to it that he is ready to provide new security services that extend to 183 countries … So, this is the truth of the PA, it is nothing more than a security arm serving the enemies of Islam.

The PA and its apparatus are liars in rejecting the Trump deal, so whoever ceded 78% of the land of Israa and Mi’raj in the Oslo Accord does not harm him to give up 82% in the Trump deal, but the betrayal required to implement the deal is greater than the PA, and America and Jewish entity are betting on preparing the atmosphere for the implementation of their colonial projects. As the Jewish entity invested the Oslo agreement as a cover to create a new reality in the West Bank, and they had bet on the PLO that abandoned its charter and accepted the recognition of the Jewish entity and ceded most of Palestine after saying the three no’s; no recognition, no peace, and no negotiation with the Zionist enemy.

The PA’s rejection of Trump’s deal is a formal refusal and not a real one. The understandings of “Beilin-Abbas” and “Olmert-Abbas” are not very different from Trump’s deal except in some details. What confirms that the authority’s opposition is formal and not real is its assertion of its adherence to fighting terrorism “i.e. fighting Islam”, and its adherence to the international resolutions and the agreements it signed with the Jewish entity, under which it ceded most of Palestine, its adherence to the Arab treacherous initiative, and its adherence to the option of negotiations, as it adheres to everything that preserves the Jewish entity and gives it legitimacy in the Blessed Land of Palestine. Therefore the Jewish entity will remain reassured of the implementation its projects as long as the Authority adheres to its security role and appeals to the international community, the Security Council and the United Nations, because it is an appeal similar to a cry in a valley that does not give relief or save a person.

The crimes committed by the PA against you and your issue never stopped, as it did not stop at the crime of relinquishing your land to your enemy, rather it made people taste the fire of its “sacred” security coordination with the occupation, and left no door to corrupt our children and destroy the values ​​of Islam in their souls except it opened it, and you have seen this clearly in the many educational curricula and corrupt programs. You have seen its endeavor to change the personal status law to comply with the CEDAW criminal agreement, and flooded people with loans and debt as a result of its economic policy of keeping people mortgaged to banks… And corruption prevailed in its institutions until the PA became a hotbed for the corrupt … It is not expected to stop its crimes, as the hearts its leaders absorbed dependency to the enemies of Islam.

What your enemies plot against you is tremendous, and what is planned for you is a greater crime than what happened in 48 and 67, so the Jewish entity seeks to make Palestine its exclusive land, and this crime cannot be stopped through the Security Council and the United Nations or the Quartet … etc. وَالَّذِينَ كَفَرُوا بَعْضُهُمْ أَوْلِيَاءُ بَعْضٍ “They are [in fact] allies of one another.” [Al-Ma’ida: 51]

You have experienced international resolutions; they are to distract and silence peoples! Then only what was in the interest of the enemies of Islam would be executed… As for the positions of the leaders of the authority and rulers of the Islamic world, they are disgraceful and laggards, because they have betrayed your issue for a long time, so do not wait for the good from them.

The radical solution to the issue of Palestine is to bring it back to its origin; to its true scope, that is Islam and the Ummah of Islam, for this is the correct and legitimate path to your pride, which is what your enemies work day and night to distract you from. What cast terror into the hearts of your enemy is calling the Ummah and its armies to give support to establish the Khilafah (Caliphate), and Jihad in the way of Allah to cleanse the Blessed Land from the abomination of the usurpers … America and Jewish entity are haunted by Islam and the return of the Khilafah, and the truth of  the Jews and their enmity to us and to Islam is clear in Allah’s Book. Allah Almighty said: لَتَجِدَنَّ أَشَدَّ النَّاسِ عَدَاوَةً لِلَّذِينَ آمَنُوا الْيَهُودَ وَالَّذِينَ أَشْرَكُوا “You will surely find the most intense of the people in animosity towards the believers [to be] the Jews and those who are polytheist” [Al-Ma’ida: 82]. And He (swt) said: أَمْ لَهُمْ نَصِيبٌ مِنَ الْمُلْكِ فَإِذاً لَا يُؤْتُونَ النَّاسَ نَقِيراً “Or have they a share of dominion? Then [if that were so], they would not give the people [even as much as] the speck on a date seed.” [An-Nisa: 53[.

And Allah has guaranteed us to manifest His religion, and His Messenger ﷺ gave us the glad tidings of the Khilafah on the method of the Prophethood and Allah does not fail in His promise, so trust in Allah your protector and your helper … Trust in your Ummah the best nation that was brought out to the people, and adhere to the words of Allah Almighty: يَا أَيُّهَا الَّذِينَ آمَنُوا اصْبِرُوا وَصَابِرُوا وَرَابِطُوا وَاتَّقُوا اللَّهَ لَعَلَّكُمْ تُفْلِحُونَ “O you who believe! Endure and be more patient (than your enemy), and guard your territory by stationing army units permanently at the places from where the enemy can attack you, and fear Allah, so that you may be successful.” [Al-i-Imran: 200]  وَاعْتَصِمُوا بِاللَّهِ هُوَ مَوْلَاكُمْ فَنِعْمَ الْمَوْلَى وَنِعْمَ النَّصِيرُ “and hold fast to Allah. He is your protector; and excellent is the protector, and excellent is the helper.” [Al-Hajj: 78[. Adhere to the words of Allah Almighty:

“O you who have believed, when you encounter a company [from the enemy forces], stand firm and remember Allah much that you may be successful. * And obey Allah and His Messenger, and do not dispute and [thus] lose courage and [then] your strength would depart; and be patient. Indeed, Allah is with the patient.” [Al-Anfal: 45-46]