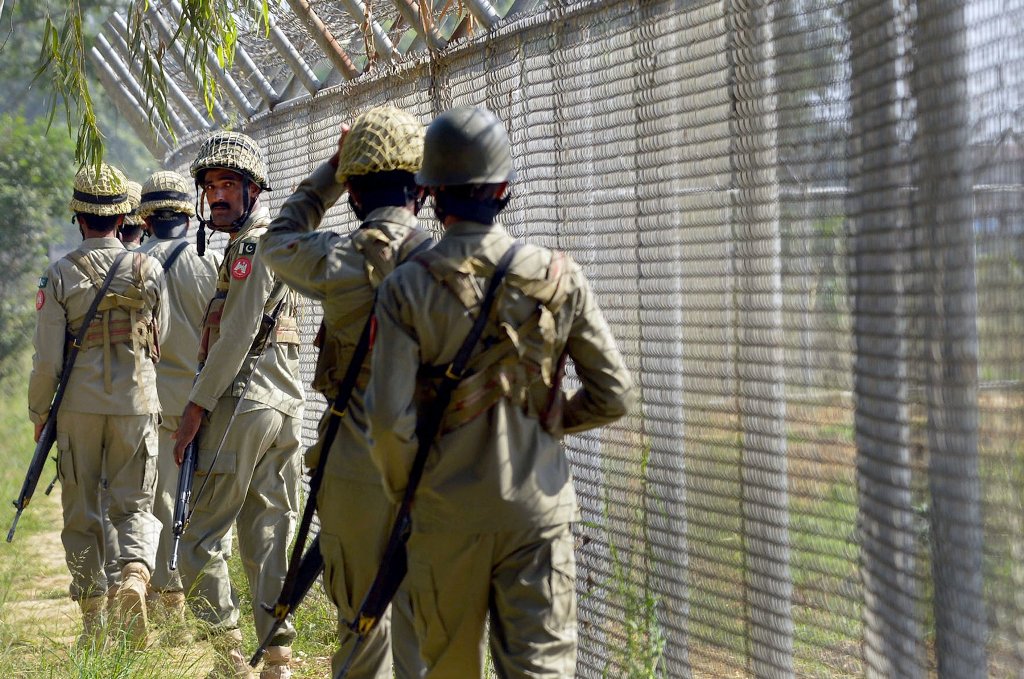 Al-Jazeera reported that three Indian soldiers were killed by firing from the Pakistani side in the Kashmir region, whilst Pakistan announced the death of two of its soldiers, and another injured, as a result of the Indian shelling across the Line of Control separating the two sides. (Al-Jazeera Net)

The Line of Control (LoC) which divides liberated Kashmir and Occupied Kashmir has historically been a pressure point for India which the Pakistani State exploited whenever it wanted to put pressure on India within the Occupied Kashmir Valley. Ceasefire Violations (CFVs) across the line of control were thus normally initiated by the Pakistani State, as a cover for its support for the Kashmiri armed resistance. After the launch of the War on Terror the Pakistani State abandoned its support for the Kashmiri armed resistance, renewed the LOC ceasefire agreement in 2003 and provided the Hindu State with a strategic respite to strengthen her occupation of Jammu and Kashmir.

The turning point in the Pakistan-India confrontation along the Line of Control came on 29 September 2016, when India claimed that it has carried out a surgical strike across the Line of Control, with Indian troops penetrating into the Pakistani side of Kashmir. The claim of a surgical strike inside Pakistan held territory was immediately rejected by the Pakistani military, followed a militant attack on Uri and the martyrdom of the famous Kashmiri Mujahid Burhan Wani. Since then India has adopted the policy of belligerence across the LoC, regularly initiating CFVs along the LoC. Through adopting an aggressive policy on the LoC, the Hindu State aims to strategically alter and reverse the power equation along the LoC. The goal of the Hindu State, through such a policy of belligerence, is to pressurize the Pakistani State into openly disowning its support for the armed resistance in Kashmir, where any material support for the armed resistance in Kashmir will be linked to a threat of greater war between India and Pakistan initiated by the Indian State. Emboldened by support from the United States, the Indian government under Modi has threatened military escalation and war, if militant groups fighting in Kashmir are supported by the Pakistani State.

This is a complete reversal of the situation along the Line of Control, where historically it was considered a soft underbelly of the Indian State ,which was used by Pakistan to put military pressure on India in Occupied Kashmir. What has contributed to this reversal of the power equation along the Line of Control is the explicit delinking of, and abandonment of, the use of military force by the Pakistani State in support of the Kashmiri armed resistance and the Pakistani State’s explicit refusal to help the oppressed Muslims of occupied Kashmir through military means.

By unilaterally announcing that Kashmir has no military solution, Pakistan’s political and military rulers have encouraged the Hindu State in its belligerence along the Line of Control. The Hindu State, assured that Kashmir will not trigger a wider military response from Pakistan, has sought to aggressively crackdown on militant groups in the Kashmir Valley. Instead of disowning military confrontation with Pakistan, India has used military means and pressure to ensure that Pakistan abides by its commitment to not support Kashmiri armed resistance.  Although the Pakistani State does respond to CFVs along the LOC initiated by the Indian side, this response is now purely for defensive purposes, to maintain the prestige of its military domestically and to inflict reciprocal harm on the Indian side for any causalities taking place due to Indian belligerence. Successive Pakistani regimes have tried to sell this policy of abdication to India over Kashmir. As a policy of restraint in front of Muslims of Pakistan. However increasingly the public disapprove of this approach of weakness in front of the Hindu State.

The issue of Kashmir however will only be solved through military means where the power of the Pakistan’s formidable military is deployed to end the Indian occupation of the Occupied Valley. This is not possible through the current state structure in Pakistan, which has openly and explicitly disowned a military solution to Kashmir. It is only the reestablishment of the Khilafah (Caliphate) on the Method of Prophethood in Pakistan which will adopt a military policy towards liberation of all occupied lands, which will result in the liberation of Kashmir from the clutches of the Hindu State.

“So be not weak and ask not for peace (from the enemies of Islam), while you are having the upper hand. Allah is with you, and will never decrease the reward of your good deeds.” [Surah Muhammad 47:35]