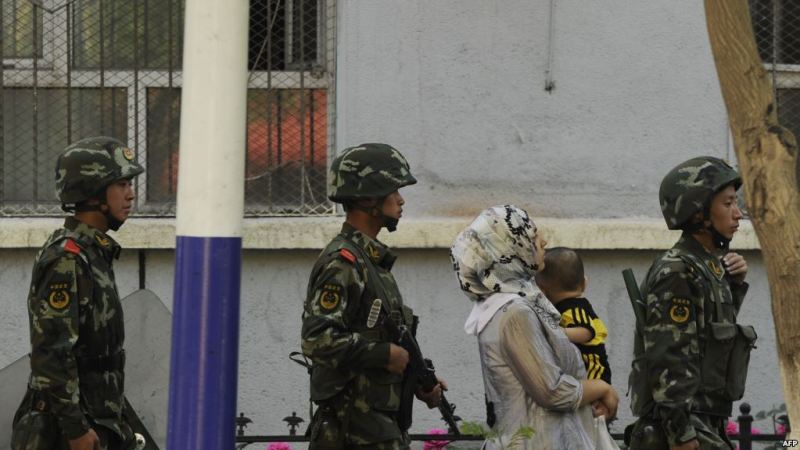 Pakistan’s rulers have already established a stance of alliance with those who openly persecute the Muslims, maintaining a condemnable silence at their oppression, rewarding their evil with economic deals. However, now Pakistan’s rulers have reached a new low, even for them, voicing support of the Chinese government, even as it wages war on the Deen of the Uyghur Muslims of East Turkestan. In an interview to Al-Jazeera broadcast on 30 December 2018, Pakistan’s President, Arif Alvi, voiced full confidence in China in handling those under its authority, when asked about Beijing’s brutal stance towards the long-suffering Uyghur Muslims. Pakistan’s president voiced support of China, even as it confines hundreds of thousands of Muslims in concentration camps, shackles Muslims and pours cements in their mouths until suffocation. He reposed confidence in China, even as it prevents the chaste Muslim women from conceiving and giving birth, whilst castrating Muslim men. And he granted support to a regime that places a Chinese spy in Muslim homes, in flagrant disregard to Islamic laws of privacy and separation of genders. Days have passed without a retraction of the regime’s poisonous support of the Chinese tyrants, without even regret or remorse.

Such a despicable stance is expected from rulers who do not rule by all that Allah (swt) has revealed. It is only such rulers that rush to normalize relations with all those who wage open war against Muslims, whether it is China in the East or America and Russia in the West. They ally with the oppressors, even though Allah (swt) said, إِنَّمَا يَنْهَاكُمْ اللَّهُ عَنْ الَّذِينَ قَاتَلُوكُمْ فِي الدِّينِ وَأَخْرَجُوكُمْ مِنْ دِيَارِكُمْ وَظَاهَرُوا عَلَى إِخْرَاجِكُمْ أَنْ تَوَلَّوْهُمْ وَمَنْ يَتَوَلَّهُمْ فَأُوْلَئِكَ هُمْ الظَّالِمُونَ “Allah forbids your alliance with those who fight you because of your Deen, and drive you from your homelands, or aid others to do so: and as for those who turn to them in alliance, they are truly oppressors.” [Surah al-Mumtahina 60:9]. And they abandon the oppressed, even though Allah (swt) said, وَإِنِ ٱسْتَنصَرُوكُمْ فِى ٱلدِّينِ فَعَلَيْكُمُ ٱلنَّصْرُ “If they seek your help in Deen, it is your duty to help them” [Surah Al-Anfal 8: 72]

O Muslims of Pakistan! Enough of rulers that extend political, military and economic support to those that defile our Deen and violate its sanctities! Let us abandon them as they have abandoned us and strive hard for the re-establishment of the Khilafah (Caliphate) on the Method of the Prophethood, Only then will we have rulers that strengthen us through the unification of Muslim Lands, rather than weaken them by alliance with the hateful enemies. Allah (swt) said, الَّذِينَ يَتَّخِذُونَ الْكَافِرِينَ أَوْلِيَاءَ مِنْ دُونِ الْمُؤْمِنِينَ أَيَبْتَغُونَ عِنْدَهُمُ الْعِزَّةَ فَإِنَّ الْعِزَّةَ لِلَّهِ جَمِيعًا “Those who take disbelievers for helpers or friends instead of believers, do they seek honor, power and glory with them? Verily, then to Allah belongs all honor, power and glory.” [Surah An-Nisa 4:139]