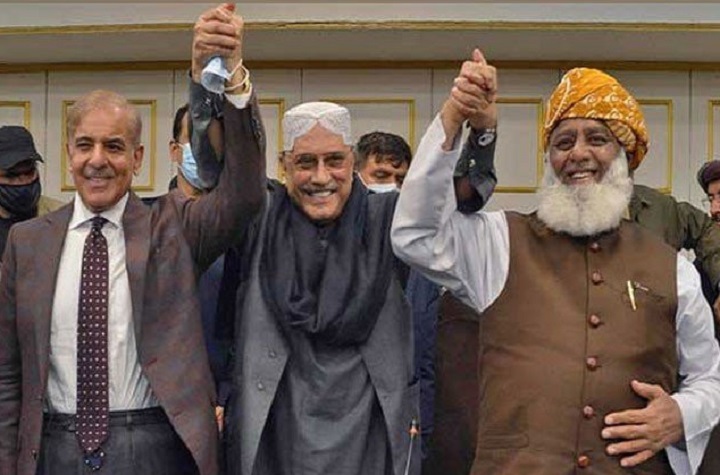 Recently, the leadership of the Pakistani Peoples Party (PPP) and Pakistan Muslim
League-Nawaz faction (PML-N) met in Lahore for renewed cooperation—the political capital of the country. The meeting suggests that Khan’s government faces a stern test ahead of the general election in October 2023, and Khan’s adversaries and allies alike will be jostling for power. (Source: Dawn)

Comment:
The meeting of PPP and PML-N leaders to discuss cooperation ahead of the general election is an ominous sign that the military is growing frustrated with Khan’s government and his beleaguered party Pakistan Tehreek Insaaf (PTI). Even Khan’s coalition partners are playing with the power optics and have started to recalibrate their relationships. PTI’s coalition partners Muttahida Qaumi Movement (MQM) and Pakistan Muslim League- Q faction (PML-Q) have openly flirted with the opposition parties. Whether MQM and PML-Q are genuinely looking to switch sides or trying to negotiate a better deal with PTI the question most analysts are asking what is the army’s position.

Pakistan is a country where the army through its institution the ISI moulds domestic politics to suit its interests. Pakistan’s political history is littered with many such examples. Sometimes, Pakistan’s army brass like to engineer political outcomes behind the scenes—the four governments of Bhutto and Sharif in the so-called decade of democracy is an example of excessive military interference. On other occasions the army likes to take direct control and fiddle with Pakistani politics. When Musharraf ousted Nawaz Sharif from power through a military coup in 1999, he began a long journey of building domestic politic support by making himself the kingpin of Pakistan’s political landscape. Musharraf’s meddling in Pakistani politics casts a long shadow on Khan’s current government, which is very similar to the Musharraf government minus a few faces.

There is no doubt that Khan and the military brass have their differences, but nothing of the sort that suggests schisms are deep seated. On the contrary, the army is more worried about the incompetence of Khan’s government from the handling of the economy to managing the fallout from India’s occupation of Kashmir. By giving leeway for PPP and PML- N to oppose PTI and also permitting the MQM and PML-N to flirt with the opposition, the army brass is grooming potential options should Khan’s popularity plummet to the point where he is unlikely to bounce back.

But six decades of disproportionate tinkering with Pakistani politics comes at a huge cost. Pakistanis despise dynasty politics of Bhuttos versus Sharifs, and if version 3.0 was to assume power the outcome would be no different to the 1990s. Added to this complexity is the widely held perception that the Pakistani army works for America. From the abandonment of Kashmir and Afghanistan, to the army’s support for the IMF—started during the Zia era—has left an indelible impression amongst the populace that the army is no longer the custodian of Pakistani interests. So whether Khan falls or stays in power the days of tinkering with Pakistani politics are numbered.