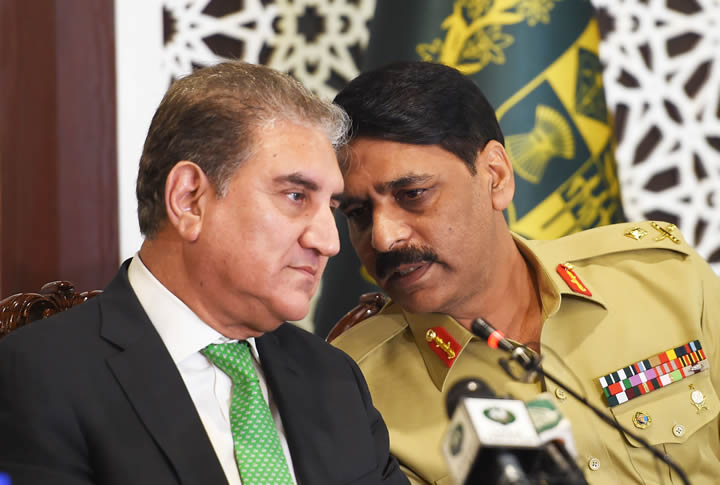 On February 24th 2021, Pakistan and India agreed to end violations of LoC based on the truce reached between the two countries in 2003. The statement read the two sides “agreed to address each other’s core issues/concerns, which have propensity to disturb peace and lead to violence.” [voanews]

Comment:
The ceasefire text produced by the two militaries clearly contradicts the demands made by Imran Khan at Kotli on February 6th 2021. At the public gathering, Khan was absolutely adamant that India must reverse its steps of August 5th 2019 before any dialogue over Kashmir could happen. He said, “Come resolve this Kashmir dispute with us…the first thing you must do is to restore Article 370…” [The News] What at first appears as a slip by the Bajwa- Khan regime quickly turned into recognition of Modi’s Kashmir Reorganisation Act passed in 2019 that converted Jammu and Kashmir into a Union Territory. Pakistan’s Foreign Minister, Shah Mehmood Qureshi, described the ceasefire as an “important step” for supporting regional peace. [The News] Qureshi’s endorsement of the ceasefire implies that Bajwa-Khan government was deeply involved in the preparation of the text and lends credence to reports of back channel diplomacy led by India’s National Security Advisor Ajit Doval. [The Hindu]

The deceit of the Bajwa-Khan regime became even uglier when the State Department spokesman, Ned Price, told journalists “We welcome steps to return the union territory of Jammu and Kashmir to full economic and political normalcy consistent with India’s democratic values”. [4] America’s description of Jammu and Kashmir as a Union Territory paves the way for a Kashmir settlement that is hugely weighted in India’s favour. It endorses the ground realities, ignores the aspiration of the Kashmiris and rejects the intense desire of Pakistanis to see Kashmir liberated. The full-scale capitulation of the Bajwa-Khan regime is an enormous betrayal of the Kashmir cause. This is exactly what the US did to help the Jewish state press home its advantages over Palestine supported by compliant Arab states to accomplish Trump’s ‘deal of the century’. The Jews balked at the deal because they wanted more concessions. There is every likelihood that India would do the same.

A return to the 2003 ceasefire agreement without India restoring Article 370 is a grave mistake made by Bajwa-Khan regime that carries huge strategic implications for Pakistan’s security. It enables America to forge a political settlement in India’s favour, where the best case scenario is for the LoC to become a permanent border. In the worst case scenario, it is likely to spur India to incessantly demand a soft border along the entire length, which will lead to a confederation with India and help the Hindu nationalists realize their dream of a ‘Greater India’.

Therefore, it is incumbent on Muslims of Pakistan to oppose the Bajwa-Khan regimes collaboration with America to strengthen India at Pakistan’s expense.

“Oh you who have Iman, respond to Allah and to the Messenger when he calls you to that which gives you life. And know that Allah intervenes between a man and his heart and that to Him you will be gathered.” [TMQ: Al-Anfal: 24]