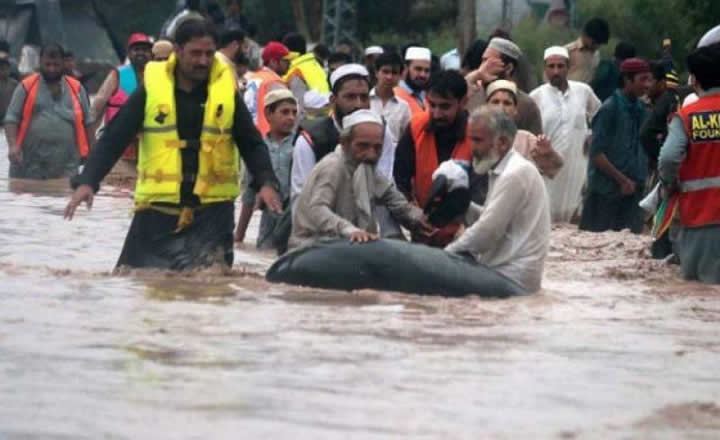 • The US Seeks a Permanent Presence on the Door Step of the World’s only Muslim Nuclear Armed Country, Pakistan
• Devastation due to Floods in KPK exposes Democracy and Highlights the Need for Khilafah (Caliphate) on the Method of the Prophethood
• Under IMF Dictates, Pakistan’s Exports Cannot Maintain Sustainable Growth

Details:
The US Seeks a Permanent Presence on the Door Step of the World’s only Muslim Nuclear Armed Country, Pakistan

Increasing prospects of peace talks with the Taliban show the U.S. strategy in Afghanistan is working, despite continuing violence and insurgent control of wide areas of the countryside, top U.S. commanders in Afghanistan said on 23 July 2018, according to Reuters. “The advancement toward the reconciliation goal in President Trump’s strategy has seen progress in the last year that we haven’t seen in the previous 17 years and that is significant,” General John Nicholson, commander of the NATO-led Resolute Support mission, told reporters. “I believe this advancement toward peace is extremely relevant and in a way is perhaps more important than some of these other metrics that we’ve been using,” he said.

However General Joseph Votel, the top U.S. regional commander who was visiting Kabul, expressed “cautious optimism” about the progress made. He said the strategy, which set no deadline for U.S. forces to leave Afghanistan, had squeezed the Taliban and created the space for diplomatic and social pressure for peace to build.

Like the British Empire and Soviet Russia previously, the United States realizes that it cannot achieve a military victory against the hardy, defiant Afghan Muslims. So, Washington is desperate to secure a political victory, through talks to secure an extensive military, intelligence and private military presence on the doorstep of the world’s only Muslim nuclear power. Even its current limited military actions are to force political talks. On 22 August 2017, US Secretary of State, Rex Tillerson, declared, “I think the president (Trump) was clear this entire (military) effort was intended to put pressure on the Taliban, to have the Taliban understand that you will not win a battlefield victory… We may not win one, but neither will you.”

The puppets in Pakistan’s leadership alone can deliver for America that which it could never achieve for itself, were it left to its own resources. So, when the US had no hope of occupying Afghanistan from an ocean away, Musharraf provided Pakistani intelligence and air bases, all the while claiming that it is putting “Pakistan First.” Then, when America’s cowardly troops were torn to pieces by the poorly armed but highly motivated Muslim fighters, Kayani and Raheel deployed our capable armed forces to restrict the movements of the Afghan Muslim resistance in the tribal areas, all the while claiming that the US crusade is “our war.” These spineless rulers rush to support the wounded American enemy, when its economy is collapsing, its demoralized military is poised for retreat and its international standing is in tatters. And the current rulers are striving to save America from ruin in the “graveyard of the empires”, even though the crusaders are intent on consolidating the influence of the malicious Hindu State there, as part of the US plan to make it the region’s leading power.

Our greatest burden is the spineless leadership that seeks to strengthen our enemies with our resources and capabilities at every opportunity, for the sake of personal wealth. They ally with the disbelieving major powers, even though such alliances are the sure path to economic ruin, insecurity and foreign policy humiliation.

Military alliance means exploitation of our military and intelligence capabilities for furthering the interests of the major powers, as we have seen for decades in the alliance with US, and more recently with Russia. Economic alliance means plunging us into interest-based debt traps, exposing our resources to foreign ownership and our economy to foreign dominance, as we have seen for decades in alliance with the US and more recently with China. And political alliance is to exploit our considerable regional influence and penetration to provide legitimacy for their collapsing projects in the region. Allah (swt) warned

“Those who take disbelievers for allies instead of believers, do they seek power with them? Verily, then to Allah belongs all power.” [Surah an-Nisa’a 4:139]

A girl was killed and several suffered injuries on 23 July 2018 as rain lashed parts of Khyber Pakhtunkhwa and caused flash floods in Peshawar and Nowshera districts reported Dawn. The PDMA said flash floods in Chimkar nullah of Nowshera district inundated houses in Kandi Tazadin and Pabbi areas. A Rescue 1122 statement issued here said the flash floods had affected Garhi Qasim, Ali Baig, and Wazir Kally and Zara Maina villages. The reports claimed that around 100 people, including women and children, were rescued from inundated villages of Pabbi. The DC office said the Government Degree College Pabbi building, assistant commissioner’s offices, and Chowki Mamraiz were submerged after the entry of five-six feet rainwater.

Heavy rain and floods are a regular, yearly occurrence in Pakistan. Yet, democratic regimes fail to arrange adequate measures to save human life every year. Pakistan has suffered deadly monsoon floods for at least last decade, in the period 2014-17 1,297 deaths in the monsoon seasons were reported while millions were affected by flooding around the country. In 2012, 520 people were killed and more than 1,180 people were injured, while the floods of 2010 were the worst in Pakistan’s history, with 1,800 people killed and 21 million affected in what became a major humanitarian crisis. While the people of Pakistan are being killed, the government and the opposition are busy in their political campaigns, attending their marches cum street festivals or playing blame games. Democratic government, federal or provincial, has failed to solve the major problem of saving precious Muslim lives from flooding.

This is due to the nature of Democracy itself. Democracy is not to look after the affairs of the people, it is only to look after the affairs of a political elite. Work for people’s welfare, if any, is restricted to development work before elections or ribbon cutting ceremonies. In Democracy, every ruler, provincial or federal, is only interested in securing his time in power. So we see devastation in KPK despite several claims of constructing small dams in KPK by the PTI government. Therefore, successive democratic regimes in the last decade have failed to solve the problem of flooding from its root. Democracy produces politicians who care only for their personal benefits whilst in public office, and care about the public only to the level of being re-elected.

In Islam, politics is looking after the affairs of the Ummah and it is an obligation. Failure renders the ruler accountable on the Day of Judgment. RasulAllah (saw) said,

The sincere and aware politicians who are working for the Khilafah today will then provide a strong environment for a generation of sincere statesman, who will be creative and capable in solving the problems of Ummah from their basis.

The government has released nearly Rs32 billion in cash support for promoting exports of textile and clothing in the last one and a half years, officials told Dawn on 24th July 2018. The massive support was doled out under the special prime minister’s package and the textile policy for the sectors. Both measures helped accelerate the pace of growth, especially that of the value-added products. Pakistan’s export of textile and clothing reached $13.53bn in 2017-18 as against $12.45bn over the previous year, reflecting an increase of 8.67pc. It shows that the cash subsidies partially picked up export proceeds from the sectors.

After every few years Pakistani exporters asks the government to provide subsidies or cash support so that their products become competitive and they can earn foreign exchange. However, because of IMF dictates and programs, rulers constantly increase the prices of electricity, gas, petroleum products and input raw material. They also increase taxes which increases the cost of production and so the cost of doing business.

When various interests in the economy, especially exporters, cry out for lowering the cost of production, the regime introduces packages which provides financial support to them for a specific period of time. This measure works for a short period of time and loses steam because all the while the prices of electricity, gas, petroleum products and other raw materials are increased on IMF dictation. The cycle merely repeats itself with no resolution.

This situation can only be changed if Islamic economic system is implemented in Pakistan under the Khilafah (Caliphate) on the Method of Prophethood. Islam’s economic system ensures that the prices of electricity, gas, petroleum products remain affordable to industry by declaring them public properties. Also Islam’s economic system does not apply crippling taxes on the manufacturing sector such as in the capitalist system, where a vast array of taxes are applied from the very start of manufacturing of a product, until its sale to the customer or consumer, such as GST, withholding tax and custom duties. So Islam’s economic system helps to keep the cost of production and eventually the cost of doing business as low as possible. This scenario makes local products competitive and exporters would not need financial support or any other especial favour to remain in business.