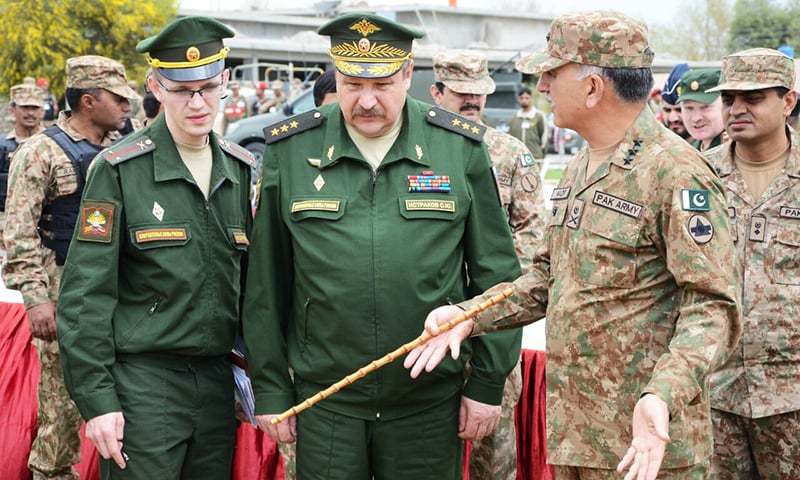 Pakistan’s Chief of Army Staff, General Qamar Javed Bajwa, on 5 November 2018, lauded the joint military exercises with Russia and said joint training is a great forum to reinforce existing relationship between the two militaries. The statement by the army chief comes as members of Russian ground forces and elements of Pakistan’s Special Forces conclude the bilateral Druzhba-III exercises. The joint military drill focused on counter-terrorism training with troops from both countries exchanging hard-learned lessons with each other.

Since the creation of Pakistan, the ruling elite, the national politicians and military commanders, have been seeking protection from major powers to counter the Indian threat. In 1955, Pakistan became a member of the Baghdad Pact, which was later known as the Central Treaty Organization (CENTO), so Pakistan could receive military hardware. However, the purpose of that organization was to contain the Soviet Union (USSR) expansion, which the United Kingdom was opposed to. In 1958, the US joined the military committee of the alliance. However, the military treaty did not help Pakistan fight against Indian aggression in 1965, which the United Kingdom endorsed. Moreover, the US suspended military aid for Pakistan. In 1971, when India attacked former East Pakistan, the US did not send its Seventh Fleet to Pakistan, so that India could be deterred from sending its forces into East Pakistan. Consequently, East Pakistan was turned into Bangladesh. America helped Pakistan militarily and economically during the first Afghan Jihad to beat USSR. However, as soon as the USSR left Afghanistan in 1987-88, America imposed sanctions under Pressler Amendment on the grounds that Pakistan had a nuclear explosive device. Then in 2001, when America needed to topple Afghan Taliban regime in Afghanistan, it again depended on Pakistan, whilst promising the safeguarding of Pakistan’s economic and military interests. However, instead of securing Pakistan’s interests, the US brought India into the Afghanistan theatre, thereby threatening Pakistan’s interests. So what is established from these realities is that alliances with major powers only serves the interest of major powers.

Since the time of the Raheel-Nawaz regime, the military and political leadership are trying to deceive the Muslims of Pakistan by claiming that they are re-aligning Pakistan, moving away from US slavery towards co-operation with Russia and China. However, any military or economic alliance with Russia or China will only benefit them, not Pakistan. Consider CPEC. From China’s standpoint, supporting Pakistan through economic and military means was regarded as an important means to preoccupy India with security problems on its Western border through strengthening Pakistan. Consider the purpose of recently concluded joint “counter-terrorism” military exercises between Pakistan and Russia. For Russia Islamic resistance to her secular system and against her occupation of Islamic Lands, as in Chechnya, is “terrorism”. So military exercises with Russia are not to help Pakistan liberate Occupied Kashmir from Indian occupation, but will help Russia in its occupation of Muslim Lands and intervention in Syria.

Islam forbids military treaties with non-Muslim states, for RasulAllah ﷺ said,«لا تَسْتَضِيئُوا بِنَارِ الْمُشْرِكِينَ» “Do not take light from the fire of the polytheists (the Mushrikin)” (reported by Ahmad and Al-Nasa’i), and the fire of a people is a Kinaya (metaphor) for their structure in war. It is also forbidden because RasulAllah ﷺ said, «فَلَنْ أَسْتَعِينَ بِمُشْرِكٍ» “I do not seek help from a polytheist (Mushrik)” (Muslim) and he ﷺ said «إِنَّا لا نَسْتَعِينُ بِمُشْرِكٍ» “We do not want any help from a polytheist (Mushrik).” (Ibn Majah, Abu Dawood). So the coming Khilafah (Caliphate) on the Method of Prophethood will not undertake military exercises or alliance with Russia, China, US or any other Non-Muslim states. Instead it will unify the Muslim Lands as a single powerful state to liberate Muslim lands under enemy occupation.

After making widespread publicity for Prime Minister Imran Khan’s ambitious Naya Pakistan Housing Programme (NPHP), the government on 5 November 2018 revealed that applicants will have to bear 20 per cent of the total cost of their dream house as down payment. “Every person has to pay 20pc of the cost of the house,…” said ruling Pakistan Tehreek-i-Insaf (PTI) leader Syed Firdous Shamim Naqvi at a joint press conference with Task Force on Housing chairman Zaigham Rizvi and Punjab Minister for Housing, Urban Development and Public Health Engineering Mehmoodur Rashid. “If the cost of the lowest category house/apartment is Rs 3 million, the applicant will have to pay Rs600,000 as down payment,” said Mr. Naqvi. Mr. Naqvi said the NPHP was based on the mortgage housing system, under which the owner of the house would return the entire cost in 20 years. Moreover interest based finance ensures that much more than the price of the house is paid back, a form of economic slavery.

If the initial payment of Rs. 600,000 as down payment is required to be paid by the applicant, how will be poor or even much of the middle class be able to afford such a housing scheme? According to a UNDP report, nearly 39 percent of Pakistanis live in multidimensional poverty, with the highest rates of poverty in FATA and Baluchistan. As for the middle classes, it is also shrinking. In 2001-02, 43 percent of the population was in the middle class. By 2015-16, the share had fallen to 38 percent. The share of 38 percent in income the middle class own only 28 percent of the property in the country. In such a situation, how will the poor or middle classes be able to take advantage of the government scheme? Moreover, if any one from these classes will be able to get a house through the scheme, it will sink them in the ocean of never ending interest based loans. Thus, the rulers in democracy have made life of the people miserable. The PTI government will not let them live in peace, with the sword of mortgage and threat of repossession for failure to keep up with their payments, hanging over their head all the time. Not being able to own a home, or even not having a roof over one’s head, is too common, due to the inequities of capitalism. For example, three quarters of the entire world’s homeless people come from India, which is the world’s largest democracy. Though poverty is considered the major cause of homelessness, India does not lack wealth, for its 100 richest people have a net worth of $250 billion.

So again Democracy is shown to only care for the interests of a small capitalist elite. The common man is left to pay back the cost of the house many times over through paying the evil of riba (interest). In contrast, Islam has declared housing as a basic necessity of humankind. RasulAllah ﷺ said,«لَيْسَ لابْنِ آدَمَ حَقٌّ فِي سِوَى هَذِهِ الْخِصَالِ: بَيْتٌ يَسْكُنُهُ، وَثَوْبٌ يُوَارِي عَوْرَتَهُ، وَجِلْفُ الْخُبْزِ وَالْمَاءِ» “The son of Adam has no right to anything except these: a house to live in, a clothing to cover his ‘Awrah (parts of body that must be covered in public), some bread, and water.” Thus in the Khilafah state, it is the responsibility of the state to ensure housing for each and every citizen. To keep the cost of housing within the affordable range of the common man, the state will provide basic facilities throughout the country. It will not just concentrate within existing urban centers, which causes massive urbanization and inflation of land costs in urban areas, even though more than 60% of Pakistan’s population is dependent upon agriculture for living. The Khilafah state will abolish the stock share company that enables the dominant private ownership of large scale construction industries. Instead the Khilafah will undertake large scale construction, bringing the cost of construction as low as possible, as it will not profiteer. If some of the citizens of the state are still not able to arrange accommodation for them, then it is the state responsibility to arrange for such needs through the ample funds it will have at its disposal after implementing the Islamic economic laws.

The IMF and Capitalism Itself is Against Pakistan’s Well Being

Asad Umar’s reassurance is contradictory to the reality of the IMF. The loans come on interest, which means IMF-indebted countries the loans many times over. The IMF insists on devaluation which the PTI already began within the recent mini-budget. The ever-weakening Rupee causes continuous, back-breaking rises in prices. It increases the cost of local agricultural and industrial production, making industrial production costly. It makes essential imports more expensive, at a time where local industry is overtaxed and underdeveloped. As a condition on its loans, the IMF insists on privatization, depriving the state treasury of revenue from its large-scale capital intensive enterprises, as well as energy and minerals. Then to compensate for the losses in revenues, the IMF demands huge increases in taxation to worsen the burden on the people, the agriculture and industry. Clearly, the IMF will never ever alleviate poverty or allow Pakistan to stand on its feet. Indeed, any country into which the IMF has sunk its teeth, has been economically ruined.

Nothing less than ruling by all that Allah (swt) has revealed will save Pakistan’s economy. The Khilafah (Caliphate) on the Method of the Prophethood will generate the equivalent of billions of dollars for the state treasury, without resorting to interest based loans, which are forbidden by Allah (swt) and His Messenger ﷺ. It will implement the Islamic ruling for energy and minerals, which is that they are a public property, whose entire benefit is for the people’s needs. It will implement the Islamic rulings on company structures, which restricts the scale of private ownership of capital-intensive industry, such as large-scale manufacturing, construction, transport and telecommunications, allowing the state to dominate these sectors and hence have access to large revenues to look after the affairs of the people. It will implement the Islamic rulings on revenue generation which abolish oppressive taxation, such as GST and income tax, which do not take into account the poverty of individuals. It will implement the Islamic ruling on currency, ensuring that it is backed by gold and silver, ending the root cause of inflation; a currency which ensured the Khilafah enjoyed stable prices for over a thousand years. The Khilafah will implement the Islamic ruling on the excessive increase in personal wealth of the rulers during ruling, which is to seize the ill-gotten wealth and put it in the Baytul Maal. So, is it not time that the Muslims worked to ensure that ruling is by all that Allah (swt) has revealed, so that wealth is circulated throughout society, rather than being confined to a few?  Allah (swt) said, كَيْ لَا يَكُونَ دُولَةً بَيْنَ الْأَغْنِيَاءِ مِنكُمْ “So that the wealth does not circulate solely among the wealthy from among you.” [Surah Al-Hashr 59: 7]