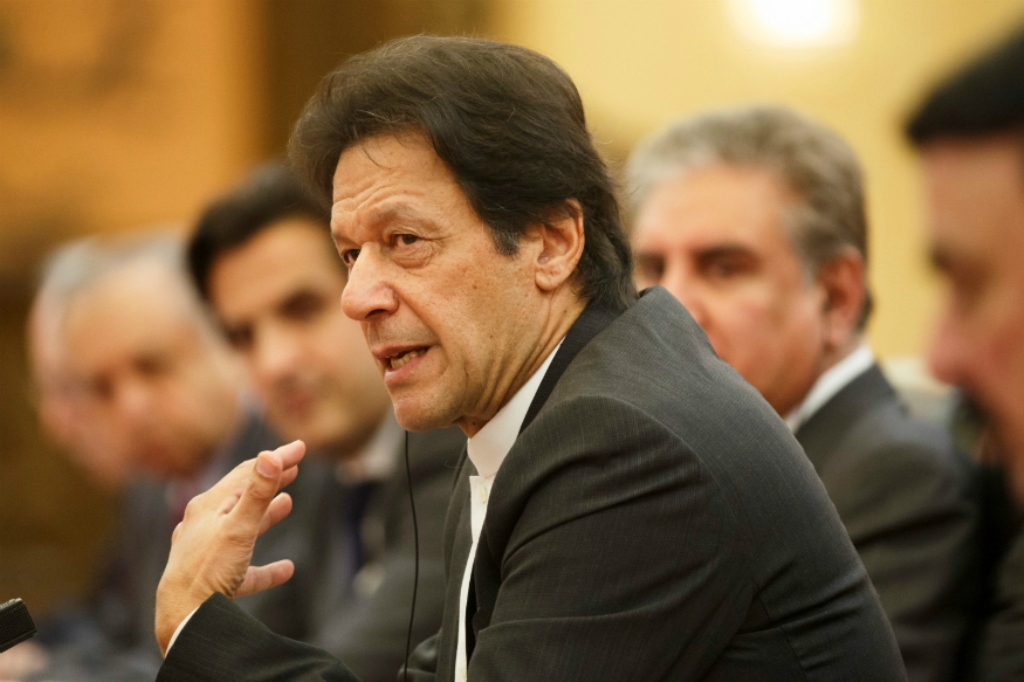 On 7th October 2019, the Prime Minister Imran Khan expressed his annoyance over criticism of his government’s 13-month performance. He asked his critics to show patience and allow him time to bring about a meaningful change in the life of the common person by making the country a true welfare state. The PM said this while speaking at a ceremony held to launch ‘Ehsaas Langar (Soup Kitchen) Scheme’ under an agreement with the Saylani Welfare International Trust. The prime minister said that, “the Madinah State was not set up in a day. The change took place slowly. Even Allah (swt) banned liquor and slavery in phases.”

Imran Khan has been caught badly in the whirlpool of his own pack of lies. Before the general elections of 2018, he repeatedly assured the Muslims of Pakistan that he will change the fate of this country in 100 days after coming into the power, since he will provide an honest leadership that will not indulge in corruption. He claimed that he will take back looted money from the plunderers and spend it for the well-being of the masses. Therefore, when Imran Khan came in power, people expected from him that he will bring meaningful change in the first 100 days. Imran even presented his 100-day program to achieve this. However, the promise to bring change in 100 days did not materialize. It was earlier extended to six months, then one year, and later prolonged to two to three years. He is now lecturing the masses that the problem created because of seventy years of bad governance cannot be resolved in a few years and so they need “not worry” and must be patient. Did Imran not know before coming into the power that the ills of seventy years cannot be undone in 100 days?

Instead of seeking apologies from the masses for his lies and accepting his monumental failure, Imran Khan is once again trying to cheat the Muslims of Pakistan, by narrating erroneous narratives about the State of Madina. The State of Madina was established on the Aqeedah of Islam from day one and the system of this state was Islamic comprehensively and exclusively. Islam as revealed by Allah (swt) was implemented from day one and as soon Allah swt revealed new commands, the State of Madina would not waste a minute in implementing them. Commands would not be delayed on the excuse that they contradict the current system implemented in the world. In contrast, Riba (Interest) is still allowed in Pakistan under a regime which boast about following the footsteps of the state of Madina. Imran Khan, who claims that he will make Pakistan a state like Madinah, is implementing the Kufr capitalist system, just like the previous political and military rulers. It is obvious that real change can never take place. Real change can only occur after the re-establishment of the Khilafah (Caliphate) on the Method of the Prophethood, which will uproot the Kufr system and implement Islam comprehensively in every field of life. The Bajwa-Imran regime must stop fooling the Muslims of Pakistan by opening free soup kitchens and clear the path for the advocates of the Khilafah. Allah (swt) said, اَلَّذِيۡنَ اِنۡ مَّكَّنّٰهُمۡ فِىۡ الۡاَرۡضِ اَقَامُوۡا الصَّلٰوةَ وَاٰتَوُا الزَّكٰوةَ وَاَمَرُوۡا بِالۡمَعۡرُوۡفِ وَنَهَوۡا عَنِ الۡمُنۡكَرِ “(Allah will certainly help) those who, were We to bestow authority on them in the land, will establish Prayers, render Zakah, enjoin good, and forbid evil. The end of all matters rests with Allah.” [Surah Al-Hajj 22:41].

On 7th October 2019, the daily Dawn Newspaper published a report that the Asian Development Bank (ADB) had approved a $200 million loan as additional financing to support the Benazir Income Support Programme (BISP). “Social protection programs like the BISP are crucial to ensure that the poorest segments of the population do not go further into poverty, especially at a time when the country is facing difficult macroeconomic challenges,” said the Director of Public Management, Financial Sector, and Trade for ADB’s Central and West Asia Department, Tariq Niazi. Also, additionally, ADB Country Director for Pakistan, Xiaohong Yang, said the additional financing would “support further institutional strengthening and improvements in financial management and controls in BISP.”

The BISP was first started in 2008 by the Pakistan People’s Party (PPP) government. Its budget has now crossed the one billion dollar mark. Various colonialist institutions backed this program in different periods. In 2013, the ADB, under the social security program, granted a loan of 430 million dollars for Pakistan. The total money for this project was 578 million dollars, of which 148 million dollars were from the government of Pakistan. The British Institution for Global Progress has provided 244 million dollars for the fund. Also the World Bank supports the BISP program, providing 60 million dollars in 2009 and 150 million dollars in 2012. Funds collected under the BISP are redistributed among those households earning less than 6,000 Rupees that are headed by a woman. Even if the political gains and corruption that are bound to BISP, are ignored, it is clear that such programs are not serious in eradicating poverty. BISP and other such initiatives are built to fight poverty generated by this system. They only create the illusion that poverty can be eradicated in capitalism, so as to distract people from the real solution, which is uprooting capitalism and implementing Islam.

Colonialist countries actually buy the loyalty of officials in Muslim countries through such programs, so as to secure their political interests in Muslim lands. Islam forbad foreign loans, investments and aid for the country as they allow the Kuffar to dominate our affairs. Allah (swt) said,  وَلَن يَجْعَلَ اللَّهُ لِلْكَافِرِينَ عَلَى الْمُؤْمِنِينَ سَبِيلًا“And He (swt) has not allowed believers to give any say to unbelievers over their affairs.” [Surah An-Nisa’a 4:141]. Instead of foreign investment, the Islamic State relies on local investments for business and welfare work. On top of this, it is an obligation, amongst many other obligations, upon the Islamic State to secure the basic needs of all citizens. In order to make this a reality, Islam has given a comprehensive economic system with all its details which enables the state to gather sufficient revenues, without ever burdening the poor. It was the outcome of this system that in the era of the Khaleefah Umer Bin AbdulAziz, there were huge Zakah funds available, but no deserving to be found as they had all been lifted from poverty. The economic system of Islam not only ensures liberation from the clutches of colonialists, it also ensures that the economy stands on its own feet firmly.