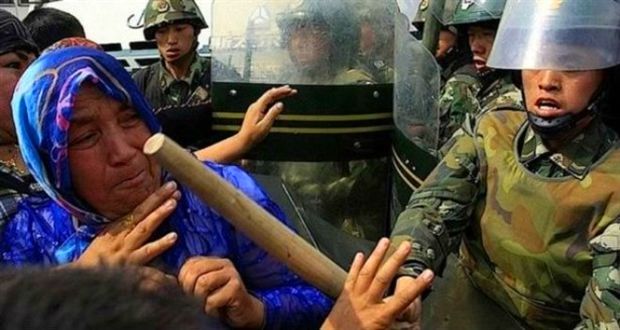 Why Ally with China as it Fabricates a Chinese Islam, when the Khilafah can Unify Muslim States as a Powerful Muslim State?

China’s main English newspaper, Global Times, reported on 7 January 2019 in an article entitled “Islamic communities urged to uphold sinicization, improve political stance” that “China will soon release an outline on the sinicization of Islam”. The outline discussions highlighted “providing training on socialist core values, laws and traditional culture, as well as guiding Muslims through vivid stories with a positive spirit.” So, the Chinese socialist kufr regime is now going to fabricate a Chinese version of Islam and indoctrinate the long oppressed Uyghurs of East Turkestan with it. There is no shock or surprise at the hostile behaviour of the Chinese because they are mushrikeen; those who associate others with Allah (swt). Allah (swt) said, لَتَجِدَنَّ أَشَدَّ النَّاسِ عَدَاوَةً لِّلَّذِينَ آمَنُوا الْيَهُودَ وَالَّذِينَ أَشْرَكُوا “You will surely find the most intense of the people in animosity toward the believers [to be] the Jews and those who associate others with Allah.” [Surah al-Maida 5:82].

Despite China’s war on Islam, the rulers of the Muslim World, including Pakistan, maintain alliances with China, turning a blind eye to its brutal conspiracy against Islam. Muslims must work to end the betrayal of the Uyghur Muslims by re-establishing the Khilafah (Caliphate) on the Method of Prophethood. It is the Khilafah on the Method of Prophethood which will ensure that the Muslim states are unified as a single powerful and resourceful state, decisively ending the era of seeking alliance and normalization with the American crusaders, the Jewish entity, the Hindu state and the Chinese mushrikeen to seek strength. Allah (swt) said, يَا أَيُّهَا الَّذِينَ آمَنُوا لَا تَتَّخِذُوا الْكَافِرِينَ أَوْلِيَاءَ مِن دُونِ الْمُؤْمِنِينَ ۚ أَتُرِيدُونَ أَن تَجْعَلُوا لِلَّهِ عَلَيْكُمْ سُلْطَانًا مُّبِينًا “O you who have believed, do not take the disbelievers as allies instead of the believers. Do you wish to give Allah against yourselves a clear case?” [Surah 4:144]

We need Implementation of Islam, Rather than Synchronization with Existing Kufr Laws

On 6th January 2019, Chief Justice, Mian Saqib Nisar, stressed the need for synchronizing the existing laws with the requirement of modern times. He said the British-era laws which were being followed in Pakistan were not in consonance with Islam and local traditions. The Chief Justice has rightly said that British era laws are being followed in Pakistan. It is unacceptable that a country which was created in the name of Islam, for which hundreds of thousands of Muslims sacrificed their lives for its creation, has been run on British Kufr laws since its inception. Moreover, the Chief Justice of the highest Court in Pakistan has made clear that the constitution of Pakistan is not Islamic despite claims otherwise by the regime. Such false claims are made so that the Muslims of Pakistan are deceived and never arise to abolish the Kufr system.

However, the recipe prescribed by the Chief Justice is wrong and akin to falling out of the frying pan into the fire. Synchronizing current laws with the requirement of modern times means ruling by kufr continues. It is clear that these laws are kufr laws, so instead of synchronizing them with more kufr, we must abolish and replace them with the law of Allah (swt). Allah (swt) said, إِنِ الْحُكْمُ إِلَّا لِلَّهِ “The ruling is only for Allah” (Surah Yousuf 12:67). And Allah (swt) said, وَمَا كَانَ لِمُؤْمِنٍ وَلَا مُؤْمِنَةٍ إِذَا قَضَى اللَّهُ وَرَسُولُهُ أَمْرًا أَنْ يَكُونَ لَهُمُ الْخِيَرَةُ مِنْ أَمْرِهِمْ ۗ وَمَنْ يَعْصِ اللَّهَ وَرَسُولَهُ فَقَدْ ضَلَّ ضَلَالًا مُبِينًا “It is not for a believer, man or woman, when Allah and His Messenger have decreed a matter that they should have any option in their decision. And whoover disobeys Allah and His Messenger, he has indeed strayed in a plain error.” (Surah Al-Ahzab 33:36).

During the opening of new lands to Islam during the era of the Khilafah (Caliphate), the Muslims never synchronized local laws or traditions with the Islamic laws. They abolished what had been implemented in those newly opened lands and implemented Islam in every field of life. That was the only key of success of the Islamic State, the Khilafah. It not only forged people of different faiths, races and languages into one Ummah, but the Muslims excelled in every field of life, whether economy, medicine, engineering, literature, arts, material sciences or jurisprudence. Muslims never felt the need to change the laws of Islam because of the changing times, as the laws of Islam are from Allah (swt), Who knows everything that will come in future till the Day of Judgment. Allah (swt) is the only One Who can make laws which never require change.

In an interview with Turkish International News Channel, TRT World, that was aired on 8 January 2019, the Prime Minister Imran Khan said that from Afghan jihad onward, Pakistan paid an enormous price in the form of 80,000 casualties, four million Afghan refugees, militancy and Kalashnikov culture. He asserted that Pakistan is still recovering from that chaos. He further added that instead of the previous mantra of doing more, Pakistan would now be an ally in peace and has been playing its role to facilitate the peace process in Afghanistan. Prime Minister, Imran Khan, has confirmed that previous rulers accepted the role of hired guns according to previous American needs. However, there is no virtue in now acting as hired facilitators for a deal to secure US private military and military in Afghanistan. After a militarily and economically exhausting seventeen Afghan War facing the resilient Afghan mujahedeen, Washington is desperate to secure a permanent presence in Afghanistan through the negotiation table. Just like previous rulers, Pakistan’s rulers are rushing to assist their struggling master, whilst deceiving the Muslims that it is in their best interests. RasulAllah ﷺ warned, «لَا يُلْدَغُ الْمُؤْمِنُ مِنْ جُحْرٍ وَاحِدٍ مَرَّتَيْنِ» “The believer is not stung from the same hole twice.” [Bukhari, Muslim].

The Muslims must not be fooled by the current rulers. They must not waste the sacrifices over the last seventeen years by co-operating with the foreign disbeliever aggressor, when it is at the brink of humiliating retreat like Soviet Russia before it. Co-operation with the Americans brings only humiliation in the Dunya and invites Punishment in the Aakhira. Previous rulers have been rudely abandoned in the dustbin of history once America had no use for them. Alliance with America this time round came with a horrible price, including America opening the doors of Afghanistan for India to establish a destabilizing presence there, opening a new front in its continuous war against Pakistan. Continued American private military presence will mean that America can continue to orchestrate false flag attacks in Pakistan. Continued American military presence means a continued threat to Pakistan’s nuclear arsenal. Allah (swt) said, إِنَّمَا يَنْهَاكُمْ اللَّهُ عَنْ الَّذِينَ قَاتَلُوكُمْ فِي الدِّينِ وَأَخْرَجُوكُمْ مِنْ دِيَارِكُمْ وَظَاهَرُوا عَلَى إِخْرَاجِكُمْ أَنْ تَوَلَّوْهُمْ وَمَنْ يَتَوَلَّهُمْ فَأُوْلَئِكَ هُمْ الظَّالِمُونَ “Allah forbids your alliance with those who fight you because of your Deen, and drive you from your homelands, or aid others to do so: and as for those who turn to them in alliance, they are truly oppressors.” [Surah al-Mumtahina 60:9]. The only way to rid Pakistan of the chains of alliance with America is to establish the Khilafah (Caliphate) on the Method of Prophethood. It alone implements the Shariah of Allah (swt), undertakes Jihad Fee Sabeelillah and will work with the mujahideen within and without Afghanistan to decisively uproot the disruptive American presence from Afghanistan.