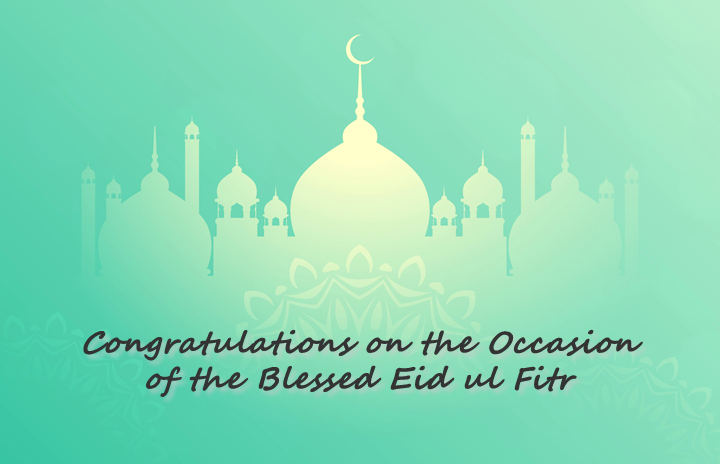 We ask Allah (swt), An-Naseer, to Send His Nasr Such that the Light and Guidance of Islam Shines Upon the Entire World

On this blessed occasion of Eid ul Fitr, we ask Allah (swt) that He has accepted our siyyam and qiyyam, our tashahhud and our sujjood, our giving of Zakat ul-Fitr and Sadqah, as well as all of our good actions. Indeed, Eid ul Fitr is a favor from Allah (swt) upon us and the Eid for us all. So, O Muslims, O loyal servants of Allah (swt), let us come out to our Eid with expanded breasts, filled with joy with what we gave of worships in the month of the revelation of Noble Quran, drawing us closer to Allah (swt), earning His pleasure, His Mercy and His Forgiveness. Allah (swt) said,

“Their mark is on their faces from the trace of prostration.” [TMQ Surah Al-Fath 48:29].

And let us raise our hands in Dua on this joyous occasions, beseeching Allah (swt), An-Naseer, Who Alone possesses and bestows Nasr (Victory) for the believers, for the Eid of all Eids, an Eid celebrated under a righteous Khaleefah, ruling us by the Book of Allah (swt) and the Sunnah of the Messenger of Allah (saw). Allah (swt) said,

“˹It is Allah Who named you ‘the Muslims’ in the earlier Scriptures and in this Quran, so that the Messenger may be a witness over you, and that you may be witnesses over humanity. So establish prayer, pay alms-tax, and hold fast to Allah (swt). He alone is your Guardian. What an excellent Guardian, and what an excellent An-Naseer!” [TMQ Surah al-Hajj 22:78].

And thus we raise our hands and ask you Allah (swt), An-Naseer:

“O Allah, An-Naseer, grant your Nasr for the re-establishment of the Khilafah (Caliphate) on the Method of Prophethood that will unify the Muslim World as the world’s largest state, striking fear in the hearts of the colonialist powers, even before it mobilizes its armies. O Allah grant your Nasr for the shield of the Ummah that will mobilize the Ummah’s armed forces for the liberation of Al-Masjid Al-Aqsa and Occupied Kashmir, as well as the Conquest of Hind. O Allah grant your Nasr for the Khilafah Rashidah that will spread the light and guidance of Islam through Dawah and Jihad, as it did for centuries before, liberating entire countries from slavery to man-made law, such that legions of people can embrace Islam. O Allah, grant your Nasr for the Khilafah of whose return the Messenger of Allah (saw) gave glad tidings, a Khilafah that will pledge the souls of our military troops in defense of the honor of your final Messenger (saw), the chief of the Anbiyyah (as), the Imam of the Messengers (as), Muhammad Mustafa (saw), such that the evil tongues will fall silent and the evil hands will fall still, whether in France, Sweden or the United States. Allahuma Aameen!”

Indeed, may Allah (swt) strengthen each and every one of us in our commitment to Allah (swt) to the Deen of Truth, such that each one of is a faithful guardian, earning the Nasr of Allah (swt) through striving and sacrifice, advancing forwards until the light of Islam shines upon the world today, as it did for centuries in the era of the Khilafah. Allah (swt) said,

“And on that day the believers will rejoice * In the victory of Allah. He gives victory to whom He wills, and He is the Exalted in Might, the Merciful” [TMQ Surah Ar-Rum 30:4-5].