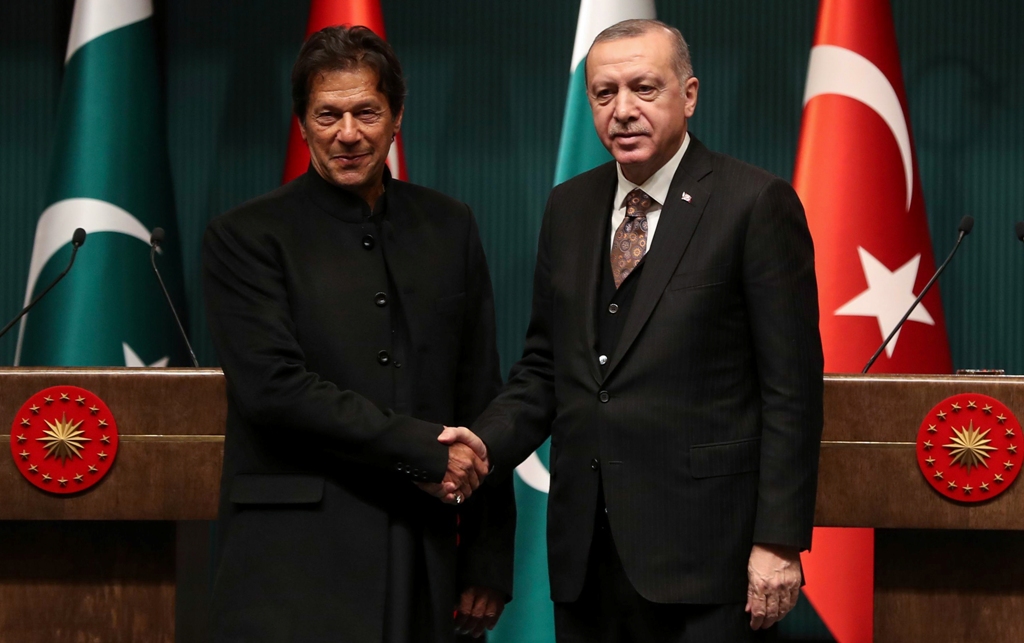 In an exclusive interview to Anadolu Agency published on 14 January 2021, Air Chief Marshal Mujahid Anwar Khan, stated that, “Our relationship is unique and enviable, not only here in Pakistan and Turkey, but all across the world they look at us like that.” Noting that he sees Turkey as a second home, Khan added, “In my candid opinion, we are two countries, one nation.” It is indeed true that the people of Pakistan and the people of Turkey are Muslims, brothers in the true Deen of Allah (swt), for Allah (swt) said, إِنَّمَا الْمُؤْمِنُونَ إِخْوَةٌ “Indeed the believers alone are a single brotherhood.” [Surah Al-Hujurat 49:10].

However, the current regimes in the two countries have made them into two states separated from each other, contrary to what pleases Allah (swt) and His Messenger ﷺ, who forbade Muslims from having more than one ruler, ruling them according to all that Allah (swt) has revealed. Shariah stressed the unity of Muslims altogether as one political entity, stipulating the death penalty for those who are independent in a state separate from the Muslim state, for the Messenger of Allah ﷺ said, «مَنْ أَتَاكُمْ وَأَمْرُكُمْ جَمِيعٌ عَلَى رَجُلٍ وَاحِدٍ يُرِيدُ أَنْ يَشُقَّ عَصَاكُمْ أَوْ يُفَرِّقَ جَمَاعَتَكُمْ فَاقْتُلُوهُ» “When you are held together by one single man as your leader, you must kill anyone who seeks to undermine your solidarity or disrupt your unity.” [Muslim.] The Messenger of Allah ﷺ also said, «إِذَا بُويِعَ لِخَلِيفَتَيْنِ فاقتُلوا الآخِرَ منهُما» “When the Bayah of allegiance is sworn to two Caliphs, kill the latter of them.” [Muslim]. Despite this, Pakistan and Turkey have two separate heads of state, with two governments that rule by other than all that Allah (swt) has revealed. Both their constitutions, as well as the laws emanating from them, are secular, completely disconnected from Islam and the identity of Muslims. Along with the other states in the Muslim World, these states were established on the ruins of the Islamic Khilafah state, which was destroyed by English agents within the Turkish and Arab nationalists, exactly a hundred Hijri years ago. Although this occasion is a grave tragedy for Muslims, the Anadolu Agency, that conducted the interview, celebrates this occasion, adopting the slogan of “100” for it.

Emphasizing Islamabad’s support for Ankara on Cyprus and other regional issues, Khan said his country stands by Turkey in its fight against terrorism. “We need to have mutual collaboration, and cooperation, to overcome these challenges,” he said, adding that Pakistan also has similar challenges on its borders. We indeed desire that Pakistan and Turkey stand with each other but in a real way and not merely as an expression of formality. This real unity is needed over the issue of Cyprus, which Turkey is fully capable of liberating entirely through battle, whilst it must not abandon any part of it to Greece through negotiation. Such unity is needed over the Kashmir issue, which Pakistan Army is fully capable of liberating, so there must be no hands extended in peace to the tyrant Modi. We indeed desire that Pakistani Army would meet with the Turkish army to support their brothers in the revolt against the tyranny in Syria, ridding them of America’s agent Bashar, instead of Turkey handing over the liberated areas to the Nusayri regime, which is allied with Russia and Iran against the vulnerable people of Syria. We indeed desire that the two countries would cooperate in combating the terrorism of the Jewish entity, America and Russia in the region, instead of entering into alliances with these evil forces, establishing a joint defense, as is the case between Turkey and the Jewish entity. The two countries open military bases for use by enemies, even though they are the fortresses of the Muslims. They both cooperate with the evil forces in the pursuit of the Mujahideen and those working to liberate their country from the agents of the West, as well as those working for the revival of the Ummah through the re-establishing of the Khilafah (Caliphate) on the Method of Prophethood.

Allah (swt) has blessed both Pakistan and Turkey with many blessings, enabling them both to become a superpower, by their mutual unification, as well as with those Islamic lands around them, under the shade of a truly sovereign state, ruled by the Khaleefah of all the Muslims, ruling according to all that Allah (swt) has revealed. It is only then that the Ummah will liberate the occupied Muslim lands, with Muslims enjoying the bounties that Allah (swt) honored them with, instead of them being plundered by the kafir colonialists, under the existing secular regimes in Muslim countries. So as to unify Pakistan and Turkey under the Khilafah State in reality, we call upon you, O Air Chief, along with your brothers in the Pakistan Army and the Turkish army, to grant Nussrah to Hizb ut Tahrir to return matters to the best they were, beyond a hundred Hijri years ago, through establishing the second Khilafah Rashidah on the Method of Prophethood.

“O believers! Respond to Allah and His Messenger when they call you to that which gives you life. And know that Allah stands between a person and their heart, and that to Him you will all be gathered.” [Surah al-Anfaal 8:24].