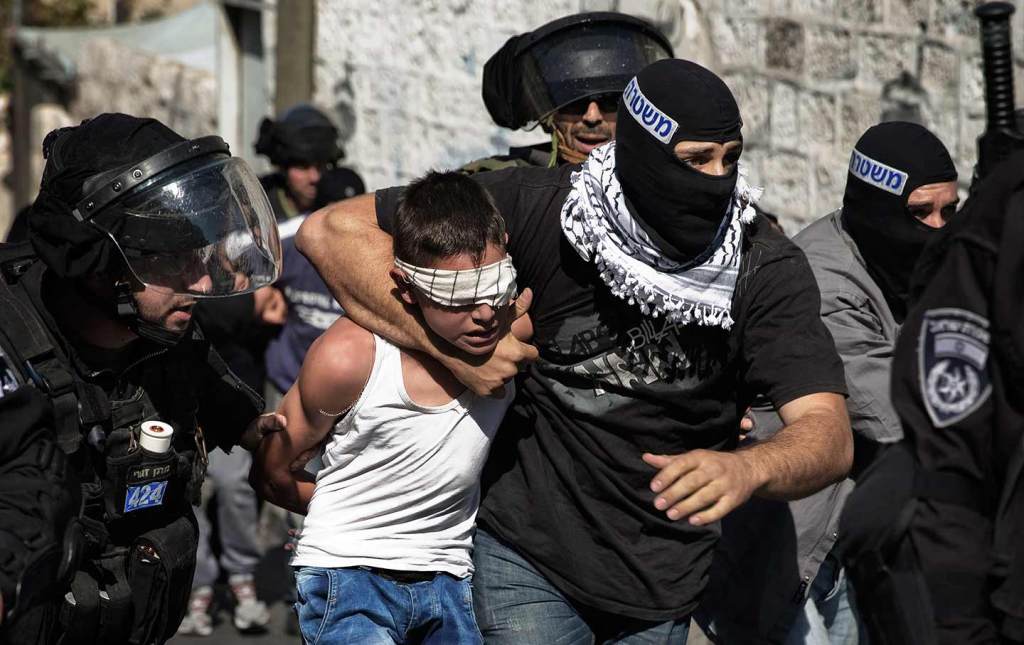 “During the last month, October, the Zionist occupation authorities escalated the arrests of Palestinians, as the Palestine Center for Prisoners reported 410 detention cases, that included 46 children and 8 women.”

The Occupation continues to target Palestinian women and children with arrest and abuse. The number of female prisoners has reached 40, including mothers, wives, students and young girls, and including the sick and wounded. All this is in conditions of extreme cruelty, complexity, humiliation and poor care.

The Handhalah Center said recently, on the so-called “National Day of Palestinian Women,” that these prisoners are currently languishing in Damon Prison, which was built by the British occupation in the forests of Al-Carmil, and which was designed to remain wet throughout the year because it was used as a tobacco storage. The Occupation authorities do not take into account any privacy for female prisoners, whether related to their private or public needs, and subject them to torture in the same centers, using the same brutal methods that they use with the prisoners.

Even in light of the outbreak of the Coronavirus epidemic, there are no real preventive measures against this virus. Rather the prison administration, including Damon Prison, has prevented prisoners from purchasing many items from the canteen, including cleaning products, which threatens the health of the female prisoners and all prisoners and puts them in danger from the virus.

As for children, the Palestinian Prisoners Center for Studies indicated that the special repression units of the prisons’ administration continued to break into prisons and departments, and abuse and assault prisoners. The center has reported 16 raids during the past month, most notably the storming of the children prisoners’ section in Ofer Prison and the transfer of 45 children and their representatives to Section 18 and the confiscation of many of their properties.

Save the Children organization issued a report on the psychological and humanitarian consequences of the arrest and detention of Palestinian children. It was found that more than 90 percent of former detainees, who benefit from post-traumatic rehabilitation programs for Palestinian former detainees in the West Bank, suffer from PTSD. These damages are not related to the length of detention, as the detention experience represents a strong trauma, regardless of its duration.

This is just the tip of the iceberg of what Palestinian women prisoners and children are subjected to in the prisons of the occupation. These authorities deafen their ears from their cries and sufferings in light of the international, Arab and local silence, and the complicity of the Dayton authority and its neglect of this suffering and tragedies, and in light of the scrambling of submissive regimes to, with insolence and impudence, publicly normalize with the Jewish entity.

But the continuation of any situation is impossible, and Allah (swt) will give support to those who support Him, and He will take those who have betrayed Him as enemies. And the oppressors will know to which end they will return, and that is easy for Allah (swt) to accomplish. Allah (swt) will support those working for the establishment of the Second Khilafah Rashidah (Rightly Guided Caliphate) on the method of Prophethood that will help the female prisoners, save children and all the captives, and liberate the country and the people with His Permission (swt), وَمَا جَعَلَهُ اللَّهُ إِلَّا بُشْرَى وَلِتَطْمَئِنَّ بِهِ قُلُوبُكُمْ وَمَا النَّصْرُ إِلَّا مِنْ عِندِ اللَّهِ إِنَّ اللَّهَ عَزِيزٌ حَكِيمٌ “And Allah made it not but good tidings and so that your hearts would be assured thereby. And victory is not but from Allah. Indeed, Allah is Exalted in Might and Wise” [Al-Anfal: 10].