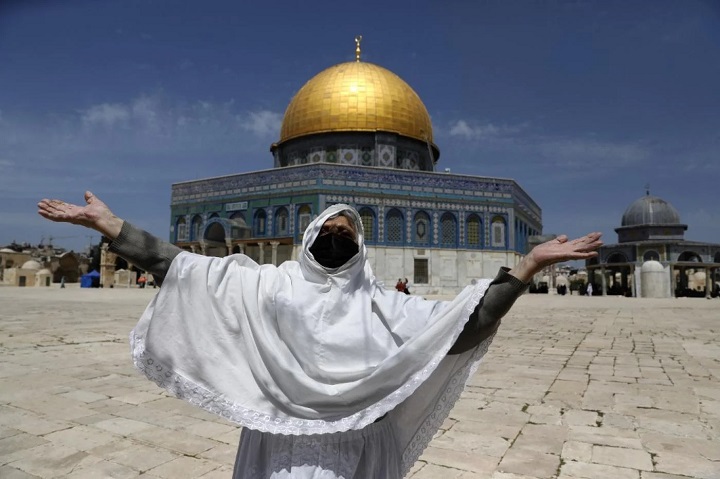 The level of the tragedies and disasters that Muslims are experiencing due to the absence of the Khilafah (Caliphate) State, that protects Islam and repels the plots of the enemy from the Muslims, has become clear. The wars waged by the enemies are on all fronts; they have permitted the violation of Muslim blood and left Muslims without help and aid.

Days hardly pass without new calamities and disasters befall Muslims, adding to the previous ones, saddening the hearts, causing the tears to shed, increasing pain and heart ache and reopening wounds. So, the aches are renewed and intensified. So, what should we as Muslims do about this?

Many Muslims are strongly moved when they see the conditions of their brothers on news programmes. Some of them weep for images of dead bodies of Muslims in India, and some of them pray for the refugees from Syria, and some of them give charity to the people of Palestine, with reactions of mercy that follow the calamities, but is this sufficient to Allah (swt)? Will the one who carry out these acts be absolve of responsibility before Allah, especially since the Ummah’s condition has gone from bad to worse?

The scourge that we live as Muslims must awaken our feelings and motivate us to work to change the painful reality and return to the normal place of the best nation chosen by Allah (swt).

Temporary reactions do not achieve the desired goal, do not lead to the desired end, and do not please Allah (swt) alone if they are isolated from serious thinking and productive work.

Serious thinking as Muslims in our situation and its outcome leads us to clear conclusions and tangible facts that we are an Ummah without a guardian; nations rallied against it, and our rulers are guardians of our enemies, taking care of their interests, not ours. What improves our situation is the following of the guidance of our noble Messenger and holding tightly to our Deen, which in the past was the source of our strength and the basis of our State. Therefore, our situation will not get better except by that which improved the situation of the first Muslims, who were in strangling ignorance, as they rose up and revolted against it and carried the doctrine of Islam with strength until Allah (swt) honoured them and they established a state in Medina whose constitution stems from Allah’s law.

This serious thinking must be focused on the solution and the cure; that is, the approach, the method, and the styles that lead us to the result we hope for, which is to change our situation and create an entity that protects us and achieves a decent life and luxury for us.

As a result of that productive, honest thinking, we will make crucial decisions about our duty as Muslims towards our Ummah and the need to work hard to extricate it from what it is in.

It is necessary for us to take advantage of the calamities that we are going through to ignite a fire in our hearts that will be a fuel that motivates us and increases our determination. The times of calamities are the best times to work hard to reshape the awareness of Muslims and make them aware of the path they must follow and spread the culture of giving and sacrificing for the Deen, and that they are the carriers of the message of the Prophet after him (saw).

All Muslims must be held responsible, even the old sheikh, the young boy and the old woman must bear the concerns of their Ummah, and strive to support their Deen.

How can a Muslim live comfortably while Palestine is bleeding, while the Masra of the Messenger of Allah’s is violated by the Jews?! Thousands of Muslims are being killed and abused, the Muslims of India, Afghanistan, Iraq and Syria are crying out (for help) without an answer! Our Qur’an is desecrated! And other things gave us gray hair and made us like orphans at the banquets of the wicked.

We must not lose sight of the tragedies of our Ummah. The pain in our souls will motivate us to renew the covenant with Allah (swt) whenever we become weak or afflicted with weakness and despair. The terrifying image will be present on our minds of our brothers in distress standing before Allah (swt) on the Day of Judgement and complaining about our negligence and abandonment. Who will save us then from the wrath of Allah (swt)?!

Allah (swt) has made clear the trade that will save us from His torment on that Day in this world, when He (swt) said:

“O you who have believed, shall I guide you to a transaction that will save you from a painful punishment? * [It is that] you believe in Allah and His Messenger and strive in the cause of Allah with your wealth and your lives. That is best for you, if you should know” [As-Saff: 10- 11].

What is required of us is the jihad of the soul and the struggle with the most precious and valuable for the sake of Allah’s Deen, so that we may be saved, and we have no choice but to sacrifice with our money and ourselves on the path of Truth and strive hard on that path despite its difficulties and hardship, so that we attain the qualities of the true believers who fulfill the conditions of Allah’s victory and the promise of succession and empowerment after weakness and humiliation. Allah (swt) says:

Every Muslim must feel that he is a member of an Ummah chosen by Allah (swt), with an ancient history that bears the most wonderful pages of glory and honour, the Ummah of the Qur’an and great Islam, the Ummah that does not deserve the fragmentation, humiliation and weakness it has reached. The key to revival is still, thanks to Allah (swt), in our hands. We are capable to repeat this honourable history so that it becomes a certain reality, and we are able to put an end to the tragedies of Muslims if we unite and establish the Khilafah that preserves Islam and Muslims, which will repel the plots of the aggressors.

So, our brothers, come to that which carries the glory of this world and the Hereafter.