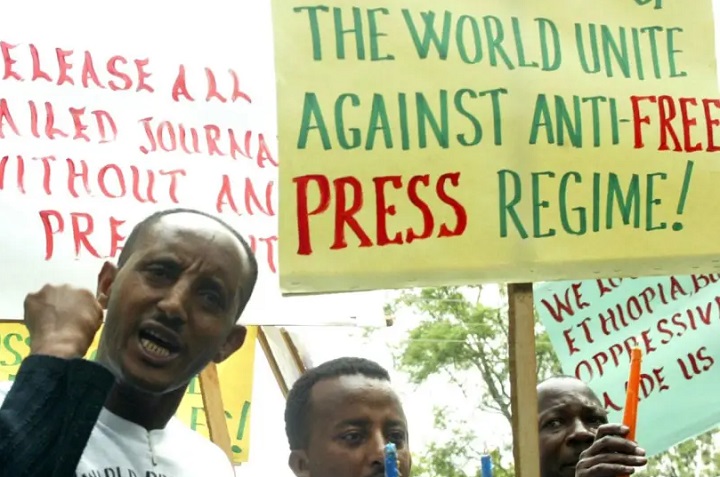 Ethiopian authorities have detained at least 19 journalists over the last week in what activists said was a “shocking and unprecedented” new crackdown on the press and independent media organisations. The latest wave of arrests began on May 19 when authorities detained at least 11 journalists and media workers in Amhara region and in the capital Addis Ababa. Among those arrested was Temesgen Desalegn, a prominent journalist and editor-in-chief of the Amharic-language Fitih magazine. [Source: Nation Media Group]

Comment:
The crackdown on journalists, activists and other critics came a few days after Prime Minister Abiy on May 20 stressed the need for a “law enforcement operation” in what he said was to “protect citizens and ensure the survival of the nation.” Last week as part of a broader crackdown, security officials in the Amhara region announced the arrests of more than 4,500 people.

Ethiopia has been receiving Global condemnation for not being upholding its international commitments to the “freedoms of expression and the press.” The United States on Tuesday 24th May 2022 voiced alarm over Ethiopia’s targeting of journalists in a sweep of arrests. State Department spokesman Ned Price saluted a continued ceasefire and progress in sending humanitarian aid into the war – battered north but called as well for protection of press freedom online and offline.

It is no wonder that the capitalist secular regimes use all possible means to silence critics that expose their crimes, even if it means violating the so-called freedom of the press. Ironically western politicians who come first to condemn by criticizing their puppets across Africa and Islamic world for violating ‘freedom of the press’, are silent, when the nasty Jewish entity does the same. Ethiopia and Africa in general have represented a model of criminality of the Western nations such as the US which indeed has her hand in perpetrating wars via the oppressive administration of Aby Ahmed.

As for press freedom which is one of the fundamentals of Democratic society, thus seeking out and circulating news, information, ideas, comment and opinion and holding those in authority to account. This is however not the case in Democracy; the deemed freedoms and values are subject to violations. Press media or freedom of expression is only sanctioned when it is pro-government and anything contrary is intolerable. On the other hand, democratic regimes mock and insult Islam under the same guise of press freedom! Media personalities who have insulted Islamic sanctities have been protected by the same regimes.

It is illustrated in Article 103 of the Draft Constitution, which Hizb ut Tahrir adopted and presented to the Ummah: “The institution of the Media Office is responsible for drawing up and executing the political media strategy for the State in order to support the interests of Islam and the Muslims. Internally, it works to build an Islamic society that is strong and cohesive, and it refutes that which is malicious while confirming that which is good. In external affairs, it is to promote Islam during peace and war in a manner that explains the greatness of Islam, its justice and the strength of its army, and exposes the corruption and oppression of the manmade system and the weakness of its army”.

Conclusively this article sets the media policy and its supervision. The media content should be of high degree of morality, sound cultures, awareness, political analysis, and ability to link the news and good formulation of it using the required means. Media should be enshrined with high ethics and reputation in a manner that serves the affairs, safety and security of the citizens.

This is indeed a rational policy upon which under the Khilafah (Caliphate) on the method of the Prophethood we will witness a fair and honest media that adopts the issues of this Ummah and we heal our chests from the corrupt regimes and biased media.