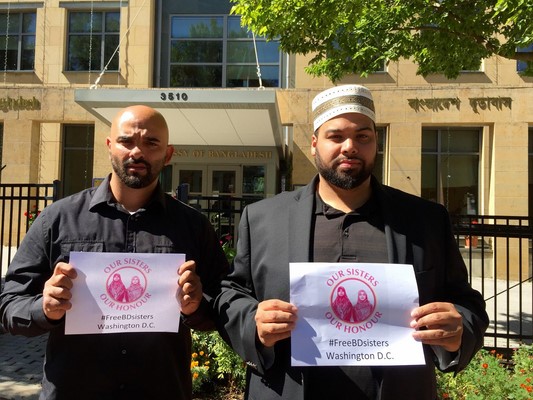 On Sunday, August 30th, 2015, police from Uttara, Dhaka, arrested two women members of Hizb ut Tahrir. The only crime these sisters committed was to invite their acquaintances to participate in an online Islamic conference that Hizb ut Tahrir held on Friday, September 4th, 2015 titled “Emerging Khilafah…The Inevitable Transformation of Bangladesh’s Politics and Economy“. Having failed to face the men of Hizb ut Tahrir, the tyrant Hasina resorted to such desperate and cowardly acts against sincere Muslim women.  Their detainment was then followed by torture in which one of the sisters was severely beaten. The torture in itself was so severe that it left the sister bleeding from various parts of her body and left her unconscious.

What threat did these dignified daughters of the Ummah bring other than winning people over with the words of Allah azza wa jal regarding the obligation of the Khilafah! Allah سبحانه وتعالى praises those Muslims who invite people to Islam:

“And who is better in speech than one who invites to Allah and does righteousness and says, “I am one of the Muslims.””

These horrific acts of torture against our sisters are nothing new to the believers, as we remember when Quraish tortured to death Sumayyah (ra) the first martyr of Islam. A woman who stood firm on the truth! The sacrifice of Sumayyah is echoed all over the world right now as our daughters, sisters, mothers are being tortured and killed for their love of Allah سبحانه وتعالى and His Messenger ﷺ.

To the people of influence your sisters are being tortured for adhering to the commandments of Allah سبحانه وتعالى, and they are being tortured on behalf of Delhi and the West. Where is your honor?  Supporting the tyrant Hasina in her open “war against Islam” will bring you the anger of Allah سبحانه وتعالى, and the punishment in this life and the next.  We urge you to stand up, be courageous and fulfill your duty.  You must save your sisters from the brutal torture and free them from prison.