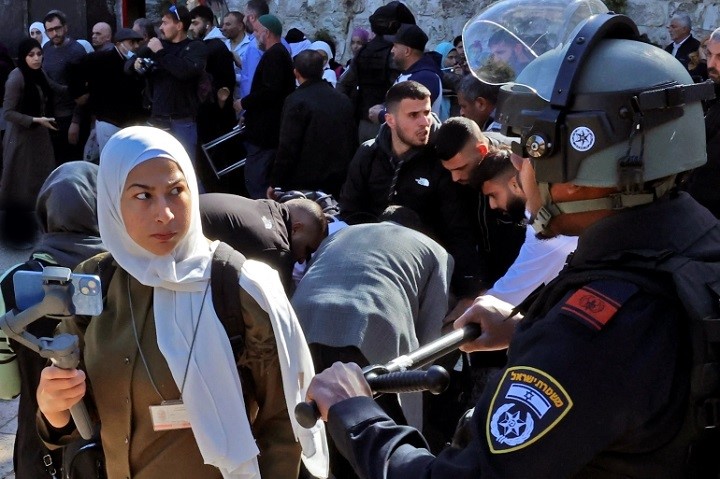 On Friday the 14th of Ramadan 1443 Hijri corresponding with the 15th of April 2022 CE, the Zionist state has yet again attacked Muslims during the Fajr prayer in the noble Al Aqsa Mosque. The army forced their way in, heavily armed, and harassed unarmed Muslims with smoke bombs and flash bangs severely assaulting the Muslims. According to several media outlets Muslims who were allegedly considered a potential threat were hiding in the mosque upon which the Jewish entity’s forces were dispatched to raid Al Aqsa Mosque.

This is not the first incident in which the Zionists attacked Muslims since the start of Ramadan. The past weeks were already unsettling because several times Muslims were harassed by the occupying forces and the invaders. Every year around this time the Zionist state takes it upon itself to use serious violence against the Muslims.

Therefore, this is not an isolated incident. Rather, it is part of the structural oppression of Muslim in Al Aqsa and all Palestinian territories. Day after day, the Muslims witness how their lands are being taken from them, violently if necessary. The Muslims are chased out of their homes abruptly so that eventually the Zionist state can take their territories.

The attacks on Al Aqsa Mosque concern the entire Ummah because this is not just a national matter or a domestic conflict. Allah (swt) said about Al Aqsa in Surah Al Israa:

“Exalted is He who took His Servant by night from al-Masjid al-haram to al-Masjid al-Aqsa, whose surroundings We have blessed, to show him of Our signs. Indeed, He is the Hearing, the Seeing.”

It is therefore the duty of the Muslims to speak out against this suppression and to unite under one political entity which can protect their Islamic symbols. The Prophet (saw) said in an authentic hadith:

“The imam (khalifah) is a should behind which you seek protection.”

Only the return of the Khilafah Rashidah Khilafah (rightly guided Caliphate) State upon the Prophetic method can stop the suppression of Muslims in Palestine and create a peaceful society which offers stability to Muslims and non-Muslims. The Muslim world should hasten to make this noble goal reality in the Muslim countries so that the interests of the Muslims are once again met, and protection is in the hands of the Muslims.