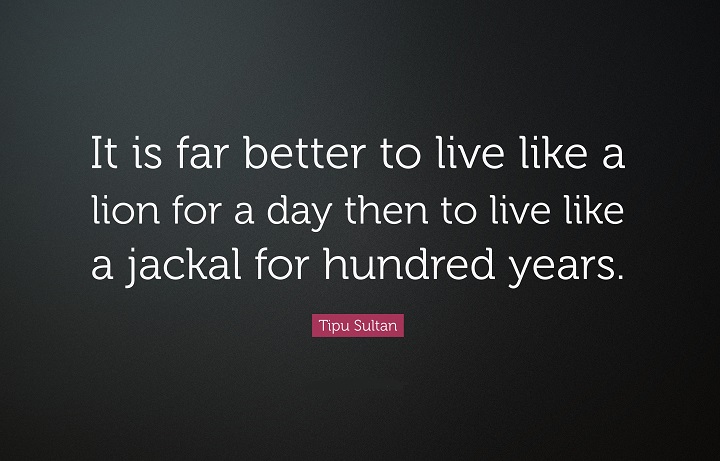 4th May 1799 is the day of the martyrdom of the Tiger of Mysore, Tipu Sultan, who defeated the British many times. Whilst fighting the combined forces of the Marhats, the British and the Nizam of Hyderabad, Tipu was martyred because of the treachery of Mir Sadiq. Tipu Sultan said, “To live like a lion for a day is far better than to live for a hundred years like a jackal.” Tipu Sultan developed rocket technology that could hit a target at a distance of two kilometers. After martyring him in battle, the British took several of his rockets back to Britain where William Congreve essentially reverse-engineered them to develop the so-called Congreve rockets. These rockets were then used in World War I by Britain. The same technology was later used by the United States to develop its own rocket technology, which ultimately resulted in NASA’s Apollo XI mission. Indeed, the reception lobby of NASA’s Wallops Flight Facility has a display of a painting depicting the Mysorean rockets being fired by Tipu Sultan’s army at the British Cavalry.

Kashmir today awaits liberation at the hands of the determined, courageous and principled sons of Tipu Sultan in Pakistan’s armed forces. Tipu Sultan was only fifteen years old at the time of his first war against the British, creatively and daringly defeating them. He wrote the combat manual Fatah-ul-Mujahideen (Victory of the Mujahideen) for his forces, through which he trained his troops in the latest rocket technology. Today, our military and intelligence officers are proud of the name Tipu, however let them consider that his legacy lies not in obedience to the Biden-Modi’s alliance. Such sinful obedience leads to the betrayal of Kashmir and forcing a normalizing alliance with the Hindu state, such that the Hindu State fears no reprisal from the sons of Tipu, whilst laying siege to the Muslims and China in compliance with US regional strategy. Indeed, the legacy of Tipu Sultan is to uproot today’s Mir Jafar and Mir Sadiq who call for “burying the past.”

It was Tipu Sultan who pledged allegiance to the Ottoman Caliph, Abdul Hamid I, and was granted the title of Wali by the Caliph over the Wilayah of Mysore, implementing Islam entirely. Today, Tipu’s sons in the Armed Forces of Pakistan must first restore the Khilafah, which was abolished 100 Hijri years ago. Only then can successive victories begin again, avenging a century of humiliation, disgrace and defeat. Hizb ut Tahrir is ready with a complete plan and preparation for the Khilafah. The Ameer of Hizb ut Tahrir, the eminent jurist and statesman, Sheikh Ata Bin Khalil Abu Al-Rashtah, is the most suitable for being our Khaleefah. InshaaAllah under Sheikh Ata’s leadership you will unify the Muslim World as a single state, cut off the roots of colonialism, liberate Al-Aqsa Mosque and Occupied Kashmir and uproot the current colonialist oppressive world order.

“If Allah helps you none shall prevail over you; if He forsakes you then who can help you? It is in Allah that the believers should put their trust.” [Ale-Imran 3:160]