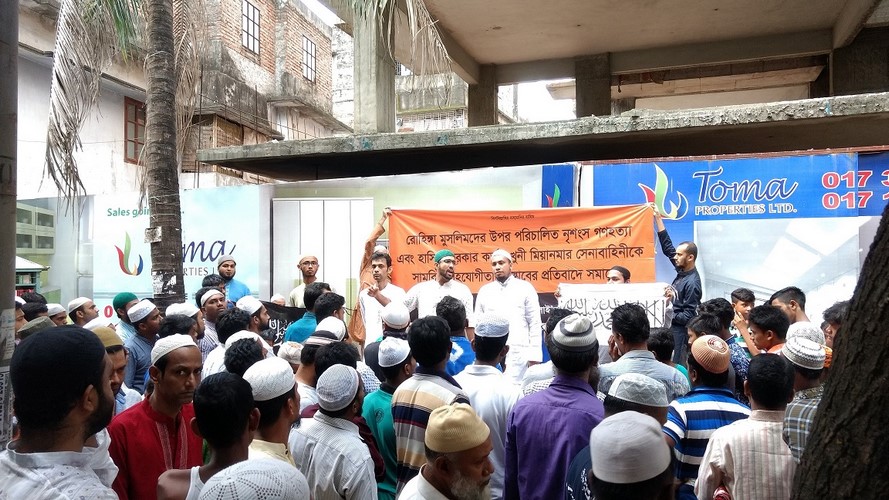 Demanding the mobilization of their armed forces and rejecting arms sales to the Myanmar regime, the Muslims of Pakistan are restless over the slaughter and displacement of the Rohingya Muslims by the military forces of Myanmar (Burma), aided by Buddhist terrorists. Indeed, in the blessed Muslims of Pakistan is the practical manifestation of the hadith of RasulAllah ﷺ,

“The similitude of believers in regard to mutual love, affection, fellow-feeling is that of one body; when any limb of it aches, the whole body aches, because of sleeplessness and fever.” (Muslim)

As for the advocates of Democracy, they have confirmed that they are deaf to the cries of the oppressed. Only after being awoken from their slumber by over two weeks of growing public outrage, did the members of the Senate and National Assembly finally gather on 11 September 2017 to urge Pakistan’s government to raise its voice internationally in condemnation. Condemnation, when mere condemnation can only be acceptable from the powerless and weaponless. Condemnation, when Pakistan is the world’s only Muslim nuclear power, possessing the world’s seventh largest armed forces and sixth largest army. Condemnation, when the blessed Muslims of Pakistan and their noble armed forces will spend of their lives and properties, willingly and freely, for the sake of Allah (swt), RasulAllah ﷺ and the believers. Indeed, such condemnation itself is subject to condemnation, reprimand and rejection!

The advocates of Democracy divide and chain an Ummah of a combined immense wealth and powerful armed forces that exceed the world’s major powers. They divide and chain the Ummah to the point that Muslims are slaughtered by even the small and weak states, such as Myanmar, without appropriate response. They do not even move to close the Myanmar embassy in Islamabad and end the Pakistan embassy in Yangon (Rangoon), as an announcement of the beginning of hostile relations, which would scare away the shayateen from our weak enemy. They do not rip to pieces the 2015 contract that was signed for sixteen JF-17 Thunder fighters with Myanmar, the first of which are due to go into service with the Myanmar Air Force within 2017. They do not halt the ongoing negotiations to license-build the JF-17 in Myanmar. And they do not demand that the impotent ruler of Bangladesh opens bases for our elite SSG, infantry, army aviation and armored units to support their Bengali brothers-in-arms against Myanmar on their border. Instead, whenever Muslims are oppressed, whether in Burma, Occupied Kashmir or Palestine, the advocates of Democracy act as if they have nothing but toothpicks in their hands, pouring salt in the wounds of the believers with words of condemnation, even though Allah (swt) said,

O Muslims of Pakistan! Democracy is deaf to the cries of the oppressed as it does not care for Islam or Muslims. Ruling by Islam alone will secure our lives, properties, sanctities and lands throughout the world. Even in the weakest periods of Islamic rule, the Muslims were strong and victorious over their oppressors. Thus, well after the Khilafah Rashida reached the Indian Subcontinent, Muhammad bin Qassim answered the cries of our oppressed and demolished the tyranny of Raja Dahir. Thus, Sultan Aurangzeb Alamgir demolished the notorious ancestors of the Myanmar Buddhist mushrikeen regime, the mighty Rakhine marauders, in answer to the cries of the oppressed Muslims. The Rakhine state had extended its dominion all the way to Chittagong in modern day Bangladesh and was at the height of its power. Undaunted, Aurangzeb liberated Chittagong in January 1666, after a thirty-six-hour siege, with 6500 troops and 288 ships, delivering it a crushing blow, which led to its complete collapse.

Indeed, only the Khilafah (Caliphate) on the Method of the Prophethood will respond to the cries of the oppressed as is their right. A Khaleefah Rashid (righteous caliph) will ignore the Westphalia nation state borders that have divided and weakened the Muslims for so long. A Khaleefah would work to unify the lands and forces of the Muslims, including those that encircle the mischievous ally of Myanmar, India. Indeed, what might does the Indian-Myanmar nexus have before the combined might of the Khilafah over the lands of Pakistan, Afghanistan, Bangladesh, Malaysia and Indonesia, let alone the rest of the Muslim Lands? So, let your love and compassion for the oppressed drive you to stand now with the advocates of Khilafah and work to restore the shield of the Muslims, the Khilafah on the Method of the Prophethood.

O Muslims of Pakistan’s Armed Forces! See, you are as the Ummah conceives you to be. The Muslims have full confidence in your motivations and capabilities and that is why they call to you now directly, ignoring the rulers, treating them with the contempt and disregard they deserve. Disregard these despicable rulers that chain you and deliver a victory that the Ummah yearns for and has not seen since the era of the Khilafah, the shield of the Muslims. Grant the Nussrah to Hizb ut Tahrir for the re-immediate re-establishment of the Khilafah on the Method of the Prophethood, so that you practically become the faithful ally of the Ummah in her time of need, securing her dominance over her enemies.  Allah (swt) said,

It is time brothers, respond!