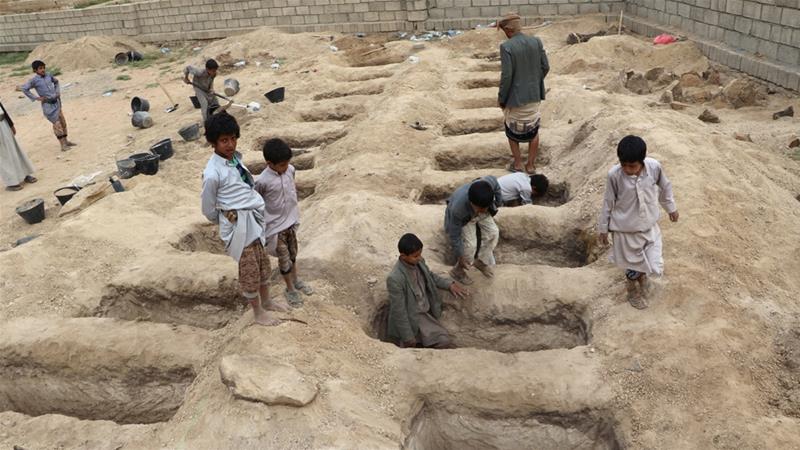 Despite the magnitude of the humanitarian disaster in Yemen, because of the war and the resulting poverty, famine and cholera and lack of health services, and the loss of an entire generation, the decision-makers in the management of this war have succeeded, even relatively, to fool the people that these are internal conflicts in this region that complicates its crisis, involves its parties and provides a cover for them. This explains the extent of marginalization and neglect of the issue of Yemen, having entered its fourth year in the “war of interests”, and having sacrificed for that the blood and lives of the people and the millions of displaced and sick until it reached the brink of the abyss.

Yemen, O Muslims, is a land in which a mother and 6 infants die every two hours in pregnancy and childbirth due to lack of health care and sanitation, and the spread of epidemics and diseases, and the spread of poverty and famine as it is the poorest country in the Middle East!

Yemen, O Muslims, borders the Gulf States that do not consider it part of the GCC despite the fact that it disputes its borders and is neighbouring the Kingdom of Saudi Arabia and Oman. Rather, the subordination to the Kafir West made the Kingdom of Saudi, at the instruction of America, lead the alliance against it by military intervention with the UAE, Oman and Qatar, before being expelled from the alliance! The rulers of the above-mentioned countries and the rulers of Iran and the rulers of Yemen in the north and south participated in all the crimes that befell our people in Yemen.

Yemen, O Muslims, is part of a single Ummah that shares its Aqeedah, blood, honour and sanctities, not a forgotten or neglected part, such that people may ignore it and forget its crisis and its people, and for the lives of its people, children, women and the elderly to be forsaken. At the same time that shelters are being opened for cats and dogs across the world, a mother and six infants die every two hours in Yemen of starvation and disease. Isn’t this alone enough to motivate men and to mobilize people to adopt their Ummah’s issues and gather around their problems and seek solutions?

The solution in Yemen is not by financial and international aid advocated by UNICEF, charities and the United Nations. They proved their dubious role in implementing the Kafir Western agenda. It is shameful, disgraceful and cynical to resort to Europe and the White House to intervene and reduce the crisis or to denounce its slow intervention in stopping the disaster.

It is a shame really that this is the ceiling of our demands while our Ummah has enough of the armies to solve the issue of Yemen, Palestine, Syria, Iraq, East Turkestan, Myanmar and the issues of the Ummah combined!!

We are not an Ummah without an army or without wealth, to have to stand on the threshold of the West and beg for their aid and wealth. If hoarding of wealth without a need is forbidden in Islam, what about hoarding of ammunition and armies while we need them?! These are armies that hold high ranks in the world in terms of military strength, who fight courageously and brilliantly, but it is shameful that they participate in the crime committed in Yemen.

The tragedy of the death of mothers and newborns like war, poverty, famine, cholera, homelessness, and displacement and every calamity that has afflicted the people of Yemen, is resolved by force and protection, which protects and preserves and protects them from evil, through a great army that saves blood, honour, sanctities and spreads peace, security and stability within one great and mighty state! This is the second Khilafah Rashidah State (Righteous Caliphate) on the method of Prophethood, which Hizb ut Tahrir works for.

Yemen, O Muslims, is one of the issues of our Ummah and we should not ignore or forget it, under the pretext of the many calamities that surround us, for Muslims are one Ummah to the exclusion of other people and the Messenger of Allah ﷺ said:

“If the people of Yemen pass by you, bringing their women and carrying their children on their shoulders, then they are from me and I am of them.”