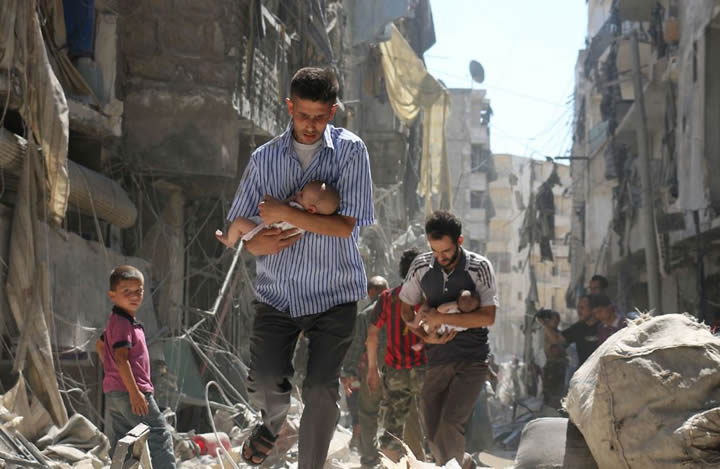 The tenth anniversary of Ash-Sham’s Revolution descends upon us and we see what things have turned into, and where the revolution has reached, after the kaffir West managed to divert it from its path with the help of its tools, and after it nearly crushed it with the so-called political solution, which one of its first steps is the formation of a constitutional committee whose task is to set a constitution defining the form of the state, its systems, and its organs. So that it becomes a secular state far removed from Islam in its system of government, state form, apparatus, and systems, thus ensuring its hegemony over the country and its capabilities, and Muslims in Ash-Sham remain within the circle of control even if it is necessary to change their butcher in a “free and fair” elections. It sees nothing wrong with having the freedom to choose who will slaughter you – and all that the kaffir (disbelieving) West has carried out in terms of truces, negotiations and conferences is a prelude to this crime called a political solution. Because this solution will not change anything of the reality, but rather the economy of the future country will remain dependent on the policies of the International Monetary Fund and the usurious World Bank, which works to control the capabilities of the country and impoverish the people. The systems and laws will remain derived from the viewpoint of the kaffir West that separates Islam from life, which depends on dismantling the Muslim family under the pretext of women’s rights and equality with men, and spread vice through international community organizations such as UNICEF and others, and the ruling political class that practices oppression, injustice, tyranny and bullying will remain an agent of the kaffir West with its political center,

The army will remain dependent on this agent political class and rely on its arming and training on the kaffir West, and it will continue to be used to protect the ruling political class from any attempt of change, and to kill the people of Ash-Sham whenever necessary under the pretext of fighting terrorism and imposing security and stability. The schools and universities will continue to teach educational curricula that distort Islam and eliminate its rulings; they spread Westernization, ignorance and backwardness among the sons of Muslims through its programs that were developed under the supervision of those who are spiteful of Islam. To ensure that they remain within the circle of the so-called third world countries, and foreign policy will remain dependent on the policies of the United Nations and its Security Council, in other words, occupation and slavery will continue to dominate us in all areas of life, all under different names required by the stage, Allah (swt) says:

“And never will the Jews or the Christians approve of you until you follow their religion. Say, “Indeed, the guidance of Allah is the [only] guidance.” If you were to follow their desires after what has come to you of knowledge, you would have against Allah no protector or helper” [Al-Baqara: 120].

O Muslims in the Land of Ash-Sham, the Abode of Islam:

After this truth has been clarified, you must realize the nature of the conflict, that it is a struggle between truth and falsehood, and that there are no half-solutions, nor is it possible to meet between right and wrong in the middle of the road. There are no middle solutions, there is no compromise, and no reliance on the oppressors. Allah (swt) says:

A radical change is necessary to preserve your sacrifices and to ensure that you live a dignified life under the rule of Islam under the shade of the Khilafah Rashidah (rightly guided Caliphate) on the method of the prophethood, that the Messenger of Allah (saw) gave the glad-tiding of its return, after the elimination of the oppressive rule in which we live in. This requires that you stand steadfast upon the truth and cut off the ties with all states, because they are tools that achieve the interests of their masters, Allah (swt) says:

“And if We had not strengthened you, you would have almost inclined to them a little. *Then [if you had], We would have made you taste double [punishment in] life and double [after] death. Then you would not find for yourself against Us a helper” [Al-Isra’: 74-75].

It is imperative to follow the path of real change that depends on the guidance of Allah (swt) to ensure His victory and support. Allah (swt) says:

Since we lived to see the tenth anniversary of Ash-Sham’s Revolution, we must correct our course, restore our decision making, and adhere to our goals and constants, relying on the one who holds victory alone, holding the solid rope of Allah, and then the banners of victories return to make our hearts rejoice again.

“…And that day the believers will rejoice * In the victory of Allah. He gives victory to whom He wills, and He is the Exalted in Might, the Merciful” [Ar-Rum: 4-5].