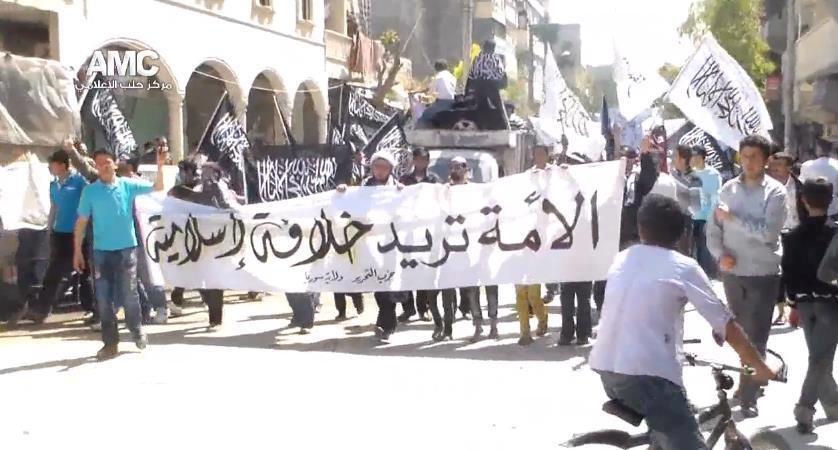 The eleventh anniversary of the start of the blessed Ash-Sham revolution is upon us, and we are sure that Allah Almighty will not fail a revolution that gave the most valuable and precious in His way, a revolution that came out of its masjids, and called out in the loudest voice “It is for Allah, it is for Allah,” and made the Messenger of Allah SAW, its leader.

The Kafir West has tried to contain this orphan revolution, curb it, and divert it from its course since the first day of its launch; because of the great danger it posed to its agent, the tyrant of Ash-Sham. This was in preparation for aborting it and emptying it of its content, so it set traps for it in its conferences, flooded it with dirty political money, and chained it with agreements, truces and negotiations, and it began preparing to chart its future according to its view based on the separation of Islam from life, through a constitution tailored to it; by excluding Islam from ruling, preserving its interests, guaranteeing its colonization of the blessed land of Ash-Sham, and securing in it the arrival of its men to power, thus it has replaced an agent with an agent; and a secular manmade constitution with a secular manmade constitution, thus guaranteeing the misery of Muslims in the blessed land of Ash-Sham, and the hardship of their lives, after keeping them away from their religion, its system and its rulings.

The Kafir West is the one who brought down the Islamic State whose foundations were established by the Messenger of Allah, peace and blessings be upon him. it is them who colonized the Muslim countries and divided them into meager mini-states. They enslave its people, and afflict them with a terrible torment. Does Security Council Resolution 2254 seek to save us and give us a decent life?!

The end of this Ummah is not reformed except by what the first of it was corrected by, for there is no salvation for us except by adhering to the commands of Allah the Almighty, and adopting the project of the Khilafah (Caliphate) upon the method of the Prophethood that emanates from our faith, and that is by working hard and sincere with the workers to establish it, it is the only way to salvation, and it is the only way for our salvation. It alone solves the problems of Muslims, restores their rights and restores their dignity, and through it alone Islam is applied in the battlefield of life, and everything else is a waste of time and effort, a waste of energies, and drowning in the swamp of the rotten capitalist system that wretched the people and destroyed the country. Allah (swt):

“Then when guidance comes to you from Me, whoever follows My guidance will neither go astray ˹in this life˺ nor suffer ˹in the next˺. But whoever turns away from My Reminder will certainly have a miserable life, * then We will raise them up blind on the Day of Judgment” [TMQ Taha:123-124].