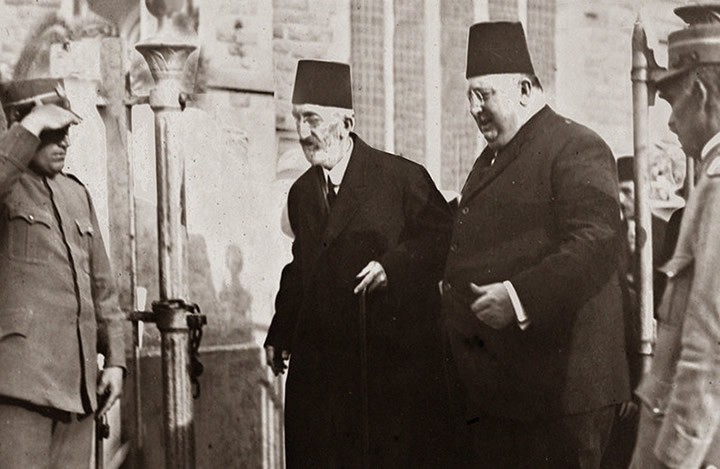 (إِنِ الْحُكْمُ إِلَّا لِلَّـهِ)
“On the Centenary of the Destruction of the Khilafah!” [Yusuf: 40]
And the Sultan (Authority) Belongs to the Ummah to Choose who Rules It

The days have passed by, just as the wind passes by, approaching the twenty-eighth of Rajab, in which the Muslims would have completed hundred years since the destruction of their state, the Islamic State, which was represented at the end of its reign by the Uthmani Khilafah (Ottoman Caliphate). The Ummah lost its authority and the right of choice of its ruler, but more than that, the colonial kaffir West divided the lands and the people, and appointed rulers who were subordinate and agents to them, to rule the lands and the people. Rulers whose description contains every evil, but the most fitting to their description is what Abu Huraira narrated of the Prophet (saw):

And the days are passing quickly, since Hizb ut Tahrir launched its global campaign- the campaign that found resonance within the Ummah despite the systematic media blackout – to alert Muslims to the need to work with it and support it to establish the second Khilafah Rashida (rightly-guided Caliphate) on the method of Prophethood, reminding them that they are the best nation:

“You are the best nation produced [as an example] for mankind. You enjoin what is right and forbid what is wrong and believe in Allah. If only the People of the Scripture had believed, it would have been better for them. Among them are believers, but most of them are defiantly disobedient” [Al-i-Imran: 110].

And being wasat (just), that is, the best, the finest and the most just of all nations, until they attained the position of being witnesses over humankind.

“And thus we have made you a just community that you will be witnesses over the people and the Messenger will be a witness over you”. [Al-Baqara: 143]

What is required of the Ummah is to strive quickly to regain its stolen authority and to appoint a caliph who will take care of its affairs by Islam; this is the highest level of looking after the affairs in the Hadith on the authority of Ibn Umar (ra) from the Messenger (saw) that he (saw) said:

Hizb ut Tahrir / Wilayah of Lebanon sends two messages to two groups in the Ummah for their significance:

First: To those who carried the banner of knowledge in this Ummah, to those who ascended the pulpits, and to those who are responsible for issuing the fatwa, we say to them: Knowledge is a trust, the Deen is a trust, and advice is a trust. And it is time for you to dedicate your efforts to unify your Ummah and establish the law of Allah by the pledge of allegiance to a caliph on the method of prophethood. Hizb ut Tahrir is working in front of you to establish it, so support it, and stand with the party today in reminding the Ummah of its catastrophe and push it to embrace the workers working for establishing the Khilafah, so that, Allah willing, it will be a public opinion among Muslims.

Second: To the Muslim youth, Allah (swt) has given victory to His Messenger through the youth, so make them your example and be supporters of this Deen and bearers of its banner, for the Ummah is waiting for you to save it, just as Al-Aqsa waited for Salah ud-Din, and just as Constantinople waited for Muhammad Al-Fatih who opened it at the age of twenty-four. So, make it your vital issue, and join Hizb ut Tahrir, and be from its workers.