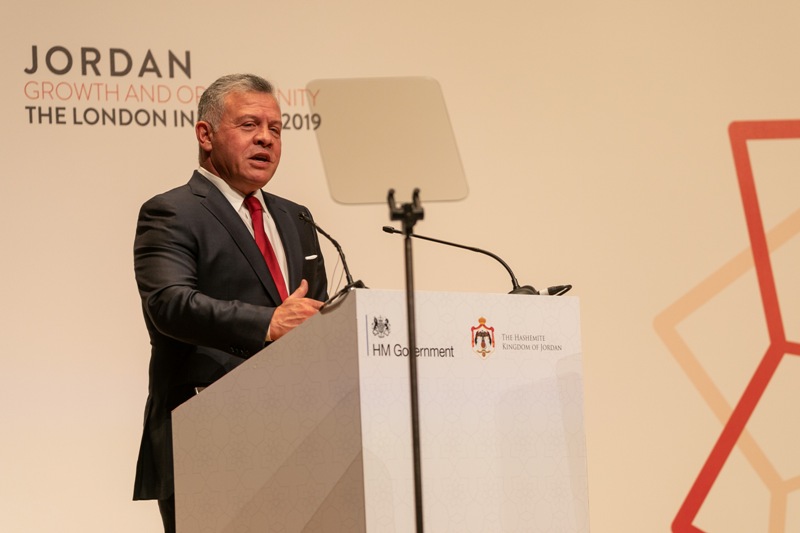 The final statement of the London Initiative conference, co-hosted by Britain and Jordan, in London on 28/2/2019 entitled “Jordan: Growth and Opportunity” stated: “The Initiative marks the start of a new partnership approach between Jordan and the international community in pursuit of Jordan’s sustainable growth and self-reliance.” In its support of the regime in Jordan and its firm base in the region since its birth, Britain, although suffering Brexit and its financial burdens, has been keen to remind the international community of the services provided by the regime in Jordan during the years of conflict in the Middle East, and as stated in the final statement: “Jordan has played a vital role in promoting regional stability and moderation, as well as supporting the international effort to counter terrorism and extremism.” Also the statement included: “The London Initiative is a five-year pathway to unlocking growth, investment and jobs for Jordan, designed by Jordan.… The international community needs to back this effort to make it a success.  Jordan will need the support of the international and regional stakeholders to better target and coordinate their support for economic reform“.

Regarding this English initiative, we highlight the following:

1- Let us recall what we said in the leaflet of Hizb ut Tahrir / Wilayah of Jordan on 26/12/2018: “The surrender of the regime to colonial countries and subjection to the policies of the IMF will lead the country to real destruction and to a major disaster. This requires the faithful to work to save the country and to pay attention to what is being planned and prepared for Jordan and its people. And in order to save the country from these calamities and crises, requires the understanding of their causes. The Jordanian regime was created by a political decision by the colonial powers, especially Britain, following the Sykes-Picot Agreement, which stripped it of its Islamic perimeter as part of the Islamic Ummah, and linked it tightly with the Western “colonial infidel” (kafir) and its capitalist system, and provided it with ways of life through aid, grants and loans, and prevented it from finding a real economy based on real resources of industry, cultivation, mining and exploitation of its wealth, and even made it a guardian of the Jewish entity, which occupies the Al-Aqsa Mosque and destroys the stones, trees and people in the Blessed Land of Palestine. Jordan has therefore become a weak hostage to the Western countries, serving their interests and implementing their policies.”

We stress once again what we have said in the same leaflet: “The way out of this cyclical cycle of incapacity, loan and poverty is only through the return to Islam and seeking solutions from its provisions, so that the revenues and expenses of the State are in accordance with the Islamic provisions, and this requires making the financial and economic policy in accordance with the provisions of the economic system in Islam, and emancipating from the Capitalist economic system with all its ideas and tools, of forbidden usury (Riba), submissive loans and fiscal taxes, as well as severing the relationship with the IMF and the World Bank and all the tools of global capitalist hegemony. This is the path of salvation and rescue of the country, and this is what Hizb ut Tahrir calls you for.”

2- On the anniversary of the destruction of the Khilafah state, on March 3, 1924, we must not forget that Britain was the biggest conspirator in the work for several decades to abolish the Khilafah state (Caliphate) by its criminal agent Mustafa Kemal, it is the basis of the scourge and malice and conspiracy against Islam and Muslims. It is the one that divided the Muslim land, in the conspiracy agreement of Sykes-Picot, which created the Jewish entity in Palestine. It divided India and Pakistan and gave Kashmir to the Hindus, it united and competed and fought and America inherited from it the war on Islam and Muslims in the midst of preventing the return of the Khilafah on the method of Prophethood. Britain is the basis of deception and deceit, it is the real enemy. On what basis do we expect good and economic support and aid?! It is rather the dependency, subordination and loyalty to the colonial Kafir who gave the rule and the kingship. Britain wants the regime in Jordan, through marketing to the international community, to continue its services for its regional and local and even the international interests and to disregard the people and only give the minimum that keeps them under control and loyalty.

3- The final statement did not issue specific figures on interest loans and grants pledged by Britain, France, the European Investment Bank and Japan, which amounted to almost $1170 million in loans and total grants of $1 billion. In this regard, the Minister of Finance said that these loans would not lead to an additional increase in the size of the debt target, but fall within the government’s plan to reduce the debt to GDP ratio! This is a manipulation and deception in the description of these loans, which will inevitably increase due to the increase in debt as absolute numbers and relative figures. The GDP is not expected to increase without achieving the desired investment projects. Moreover, these loans and grants are incredible promises, that are believed only when paid and according to the political positions pursued, It is also subject to approval of the Executive Board of the International Monetary Fund (IMF) for its second audit report in April.

4- All aid, loans and grants come within the framework of political recruitment and obedience to the Western Kafir colonial countries, led by America, Britain and France, in the framework of the failing economic support, in order to take positions that do not fall in the interests of people and the interest of the Ummah. At the top comes the pretext of the broken record of the fight against terrorism and (Extremism), which is in fact the war on Islam and the project of the Ummah project of revival to establish its executive political entity, which implements the rules of Islam. The entity that the Ummah longs for, and move eagerly for its establishment. It is the Khilafah Rashida state (rightly guided caliphate) on the method of Prophethood. Hilaire Belloc, an English Catholic writer, stated in his book in 1938, warning of the return of Islam under its political state: “It has always seemed to me possible, and even probable, that there would be a resurrection of Islam and that our sons or our grandsons would see the renewal of that tremendous struggle between the Christian culture and what has been for more than a thousand years its greatest opponent… That Muslim culture happens to have fallen back in material applications; there is no reason whatever why it should not learn its new lesson and become our equal in all those temporal things which now alone give us our superiority over it – whereas in Faith we have fallen inferior to it… Now it is probable enough that on these lines – unity under a leader – the return of Islam may arrive…

There is no leader as yet, but enthusiasm might bring one and there are signs enough in the political heavens today of what we may have to expect from the revolt of Islam at some future date -perhaps not far distant.”

O our People in Jordan:

We in Hizb ut Tahrir remind you in our publications issued over the years since the inception of the party, which you know by necessity, of the reality of the ruling in Jordan and the colonial powers fighting for the looting of its wealth and its humiliation and separating it from its Islamic environment, and that the Shariah rule requires that you rise and work for the return of Islam in implementation in the Khilafah Rashida State (rightly guided Caliphate) on the method of Prophethood, the Prophet (saw) says: «إِنَّمَا الإِمَامُ جُنَّةٌ يُقَاتَلُ مِنْ وَرَائِهِ وَيُتَّقَى بِهِ» “The Imam is but a shield, behind whom the Muslims fight and by whom they are protected.”

That is, the existence of the Khalifah (caliph) is considered a shield that protects the Ummah and protects it from its enemies conspiring against it. The Khalifah will be at the forefront of the Mujahideen to defend Islam and spread its message to the world. Therefore the solution cannot be from within the system of corruption that does not rule by what Allah has revealed, the corruption in ruling is not changed by changing the corrupt but rather by the system of Islam, which Allah (swt) described as: وَمَنْ أَحْسَنُ مِنَ اللهِ حُكْماً لِقَوْمٍ يُوْقِنُونَ “But who is better than Allah in judgement for a people who are certain [in faith]” [Al-Ma’ida: 50]

The transition from the lap of a Kafir colonizer to the lap of another Kafir colonizer is no less disobedience, even if it is in good faith. The issue is of Islam and disbelief and obedience to Allah and His Messenger. Know that no matter how good you think of methods to tempt the colonizer compared to the reality of the ruling is the actual falsehood. Because it instills the tyrannical rule that the Ummah will not accept because its demand has become evident in all Muslim countries, namely, the return of Islam to the realm of life.